Pssst. Want to get around the Internet censors in your country? Use Hotspot Shield. That’s the name of the free, ad-based web-surfing tool that covers your tracks so that no one can cut off your access to sites.

The Hotspot Shield is a creation of AnchorFree, a Sunnyvale, Calif.-based startup. The “virtual private network” tool is already used by millions of users in places such as China and Iran, where it’s illegal to get to uncensored sites such as Twitter or YouTube. The tool is supported by seven languages, and it is issuing a version for the Macintosh today. 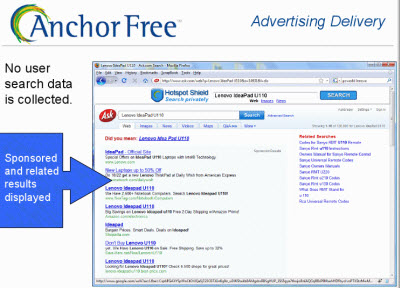 AnchorFree has 7.5 million monthly users, up more than 500 percent this year. They use it mostly because their web browsing can’t be tracked. The users log into the Hotspot Shield site, which takes the user’s Internet Protocol address and tosses it out. Then it assigns a temporary IP address that stays with the user during browsing.

Normally, Chinese censors can block users from getting to sites by stopping the users via their Internet service providers. The ISPs are told to block certain IP addresses. But they can’t easily block the Hotspot Shield IP addresses, which are generated on the fly. They can try to block access to Hotspot Shield itself, but it isn’t easy, says David Gorodyansky, founder and chief executive of AnchorFree.

It effectively turns an “http:” web address into a secure “https:” address. This is an expensive way to get around censors, since AnchorFree has set up a lot of server computing power to encrypt its communications and serve its users. Others charge for such VPN service, but ad-supported AnchorFree can provide the service for free. The VPN is in use in 190 countries and can be used on Windows and Mac desktops, laptops, and iPhones. Users view more than a billion pages per month.

The service is pretty easy to install. You activate the VPN just be clicking on an icon on the desktop. A splash page tells you that a secure connection has been made to the Hotspot Shield site. You can then browse the web. The AnchorFree search bar appears at the top of the page. Ads are shown to the users, but no user data is collected.

Of course, there are some problems here. Advertisers won’t be able to get much good data on the people viewing their ads in this kind of scheme. Also, people who are evading the law — organized criminals or drug dealers — and don’t want to be tracked can also use this kind of communication system.