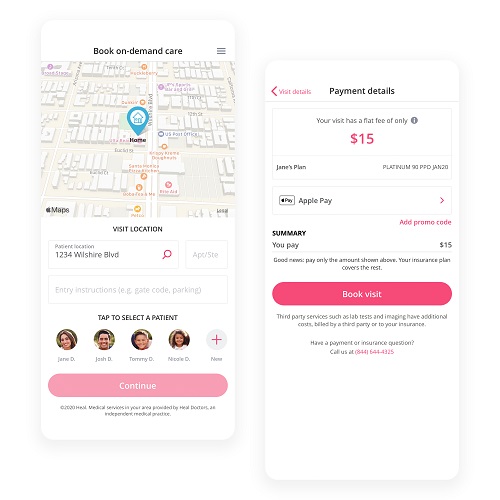 Above: Care makes it easy to book health care appointments.

“Our biggest challenge right now is how we test for quality assurance,” said Kotick. That occurs in places like Minnesota, where as many as 500 people will have to test games. Then there is the challenge of testing games with prototype hardware for the next-generation consoles. That entails a lot of shared equipment, as does motion capture, where actors wearing special suits are captured on video so artists can render them as game characters. Another tough challenge is what happens if someone becomes symptomatic while at work.

When it comes to a lot of these measures on going back to work, Kotick said, “We have no sensitivity to cost. But you don’t have to do this in a way where it’s going be wildly expensive. It is going to be expensive. But the cost is really dependent on testing and the frequency of it.”

This is where Activision Blizzard’s cash hoard of $5.9 billion is an advantage over its rivals. But the bottom line is that the costs are manageable for the company, Kotick said.

What other companies should know

Above: Activision Blizzard is one of the world’s biggest game publishers.

As far as the message for all companies, Kotick said, “I think it’s all businesses, not just game companies, that have to do this. I don’t think that there’s anything more important than the health and safety of yourself and your family members.”

Kotick also said that besides health care, companies should also focus on helping employees who are parents deal with the costs of education, as many parents have had to home-school their kids. Kotick has also tried to make that a point of differentiation for Activision Blizzard. He said that it helps if kids can be outside when they meet with babysitters. But inviting someone into a home is a risk.

“The message to game companies would be that we don’t have a population of talented people that you can draw from outside industries,” Kotick said. “Designers, animators, artists, and engineers — these are very specific skills.”

He added, “If you want to be a differentiated destination for people to come work in your company, especially now, health care has always been the thing to prioritize. I don’t think companies generally are able to do what we do. I also don’t think the leadership of the companies are enthusiastically motivated to do it. But I think it’s something that we saw as always being a part of our culture.”

Tekell said, “It’s definitely been a journey. There were days when I wondered if I was ever going to get better. My Heal doctor would say, ‘Don’t feel like going downstairs and washing a dish.’ She stayed with me every step of the way. I couldn’t be happier with how they’ve treated me. Heal is great. They’re definitely slammed. I’m beyond pneumonia. My lungs are clear. I’m making progress.”

While most other people are keeping their affairs private, Tekell added, “I’ve been very open about this. I’ve been telling people what I’m going through on Facebook. I’ve seen so many people saying COVID-19 is fake. But I’m saying I’m real. This is real.”