Lean In is more than just a book. It’s a plea for Silicon Valley’s tech companies to evolve beyond the “brogrammer” culture that has alienated the women in their ranks.

At the Dreamforce conference in October, she schooled Salesforce chief executive Marc Benioff onstage, informing him point blank that he could be doing better. She also urged men and women in the audience to meet up in person to confront issues that make them uncomfortable. Sandberg famously invites male executives to speak at her “Women of Silicon Valley” gatherings at her Atherton, Calif., home. 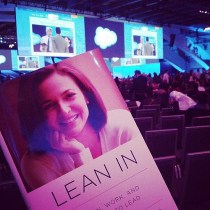 “Sixty-four percent of managers in the United States are afraid to be alone in a room with a woman,” she explained, adding, “We need to make it a badge of honor for the people in power, who are largely men, to mentor and sponsor young women.”

A year after the book’s release, tech companies are forming career support groups for male and female employees in a bid to transform their workplace culture. I caught up with three tech companies — Salesforce.com (4,750 employees), Change.org (some 170 employees), and Nerdwallet (65 employees) — for a deeper discussion about the impact of these groups. Spokespeople from these companies said that employees rushed to sign up after the release of Lean In.

FemmeForce got its start in 2011 when three employees started a community around career development for women at Salesforce. Membership has been booming since Lean In hit. And according to senior vice president of “employee success” (a fancy term for HR) Monika Fahlbusch, men have been increasingly interested in showing up since Sandberg made an appearance at Dreamforce. Male employees are now an active, but small, minority in the group.

The group organizes speaker sessions, a company-wide employee shadowing program, and smaller meetups. Fahlbusch told me that Salesforce now has 40 Lean In circles in 13 countries. Still, these efforts won’t make a profound difference until more male employees start participating, which is a priority for the coming year. “We want more men to get involved with FemmeForce and have a number of initiatives planned this year,” said Fahlbusch.

Benioff has admitted in the past that Salesforce needs more women in leadership positions. At Dreamforce, Sandberg advised Benioff that he should find female leaders in the organization and give them some seemingly unfair advantages, such as inviting a few promising young women to a meeting for top managers, even if it means passing over their immediate superior.

FemmeForce does aim to support women who are ascending the career ladder. But it will also prove to be a powerful force to recruit talented female executives. 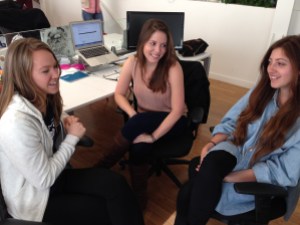 Above: Change.org employees at a WHOA session.

Jennifer Dulski was the first women to sell a company to Google. Now she’s the president and chief operating officer at online petitions startup Change.org. At Change, Dulski has introduced a number of initiatives to promote mentorship and leadership.

Dulski helped set up a program for women at the company to mentor one other. WHOA, which stands for “women helping others achieve,” is under campaign strategist Sarah Ryan’s umbrella. It partners each female employee with a more junior or senior member for regular mentorship sessions. WHOA offers suggested topics for discussion, like ascending a career ladder or preparing for employee reviews.

Some WHOA members offer lifehack sessions in which they teach others about their areas of expertise. These sessions are open to anyone in the company. A junior member of staff recently led one of the most popular sessions on the fundamentals of design, which was attended by equal numbers of men and women.

Change.org spokesperson Charlotte Hill said the impact of the Lean In movement has been keenly felt at Change.org. “When Lean In came out last year, we noticed that women at Change.org started having fascinating conversations in Skype chats and around their desks about how to create an inclusive work culture that empowers women to have fulfilling careers,” she said.

The NerdWallet Lean In group

NerdWallet is a small financial technology startup with 65 employees. Senior female executives regularly get together for dinner without the men. The company formed a Lean In group last year to inspire more junior members of staff to meet up and share ideas. 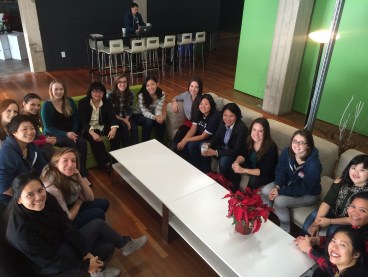 Above: A Lean In circle at NerdWallet

Christina LaMontagne, a vice president specializing in health care, formed the current Lean In group. LaMontagne told me that she started an independent Lean In circle in March with her closest female friends. She raved about it at work and ultimately formed another group for her professional life.

NerdWallet is a rare example of a startup with an equal numbers of men and women. NerdWallet is still young and relatively small, but it’s promising that the company is encouraging diversity at this stage. At other early-stage startups, human resources is a low priority, and “brogrammers” often dominate a company’s culture.

“Our company culture is inherently impacted by this rare gender parity,” said LaMontagne. “We have so many driven women at NerdWallet that push our colleagues to greater success and that serve as role models for effective female leadership.”

Some men at the company feel a bit left out, but most are indifferent to the Lean In group. Personal finance analyst Alex McAdams didn’t realize that the women in his office regularly met up. “Honestly, if there are women-specific groups, I’m not aware of it.” McAdams isn’t particularly surprised, as he feels that NerdWallet is a far “communicative and collaborative” that most of the male-dominated companies that he’s been a part of. It’s also more ethnically diverse than the majority of tech companies, according to McAdams.

Most of these groups have appeared in the past year or two, so it’s not yet clear whether they will impact workforce culture or lead to any real policy changes in the long-term.

Ellen Leanse, Google’s former global enterprise communications lead and a commentator on diversity in tech, voiced an important concern about these Lean In groups. “An ongoing meeting adds one more pressure to the litany of things that women have to do to keep progressing and achieving in the places they work,” she said. “At the end of the day, impact at work is about the work.”

In Leanse’s view, gender (or any artificial barrier) often causes people to work harder. “Ultimately, that extra work [of going to Lean In meetings] might dilute the impact of the primary focus we need in the workplace,” she said.

A Lean In group may be an important first step to tackle gender inequality. The next step is for these groups to actively involve men in the discussion. And one day, we may not even need Lean In groups at all.