THQ Nordic has been on an acquisition spree, acquiring game developers and intellectual properties. It is digging through that portfolio and now is ready to announce some new titles that should be familiar to fans.

One of the new ones is Destroy All Humans, a remake of the 2005 title that was developed by Pandemic Studios and published by THQ for PlayStation 2 and the original Xbox. Black Forest Games, a studio in Germany, is developing this project.

Onurhan Karaagacli, the development director at Black Forest Games, told me in an interview that the game is a faithful remake of the original. But the team is hard at work on creating brand new art for the title. It’s not clear yet when it is coming out or on what platforms. THQ Nordic is showing the game this week at the Electronic Entertainment Expo (E3) show this week in Los Angeles.

I talked with Karaagacli about bringing back what is now a retro favorite. Here’s an edited transcript of our interview. 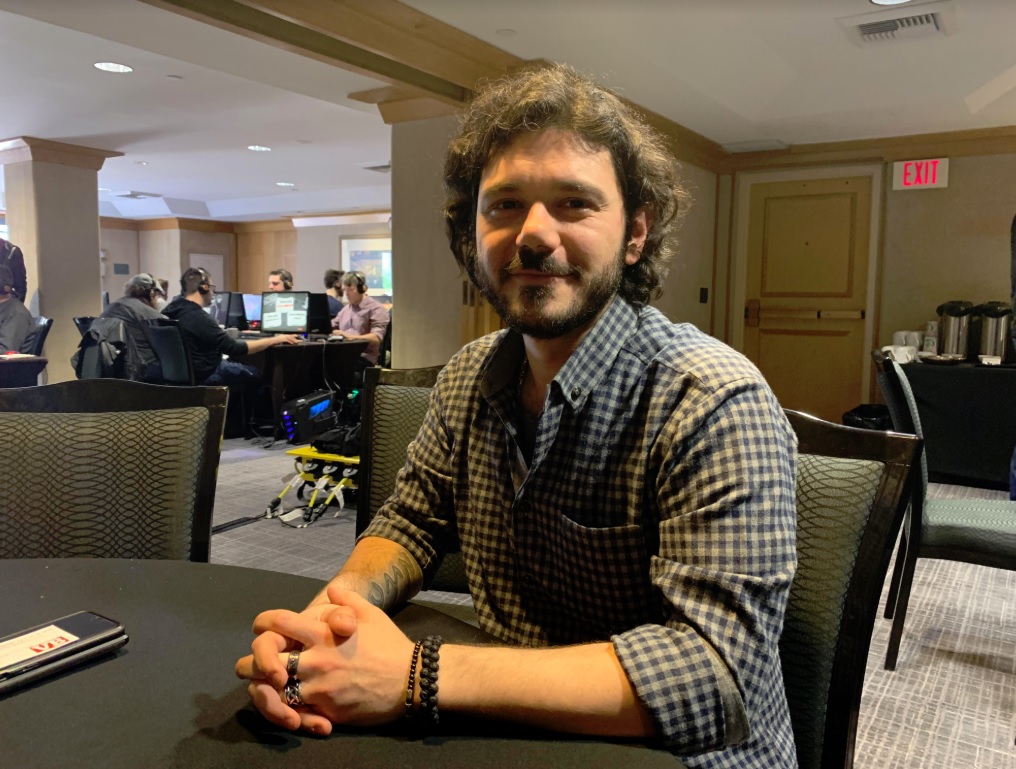 Above: Onurhan Karaagacli is development director at Black Forest Games.

Onurhan Karaagacli: Black Forest is one of the oldest independent developers in Germany. They’re a continuation of Spellbound Entertainment, which dissolved around 2012, if I’m not mistaken. I’ve been at the company for the last two years. Before my time they were famous for platformers and action games — Gianna Sisters and Rogue Stormers are the two titles that come to mind. After that, we’ve quite recently released Fade to Silence, and now we’re working on Destroy All Humans.

Destroy All Humans is pretty early in development right now. It’s been in the works for — I can say for some months. It’s slated to come out in the spring of next year. We’re working in Unreal Engine 4.

GamesBeat: How many people are at the studio right now?

Karaagacli: I don’t recall the last headcount, but we’re close to 65 or 70 people right now. We’ve been growing at a steady pace. Your team has to grow with your ambitions. 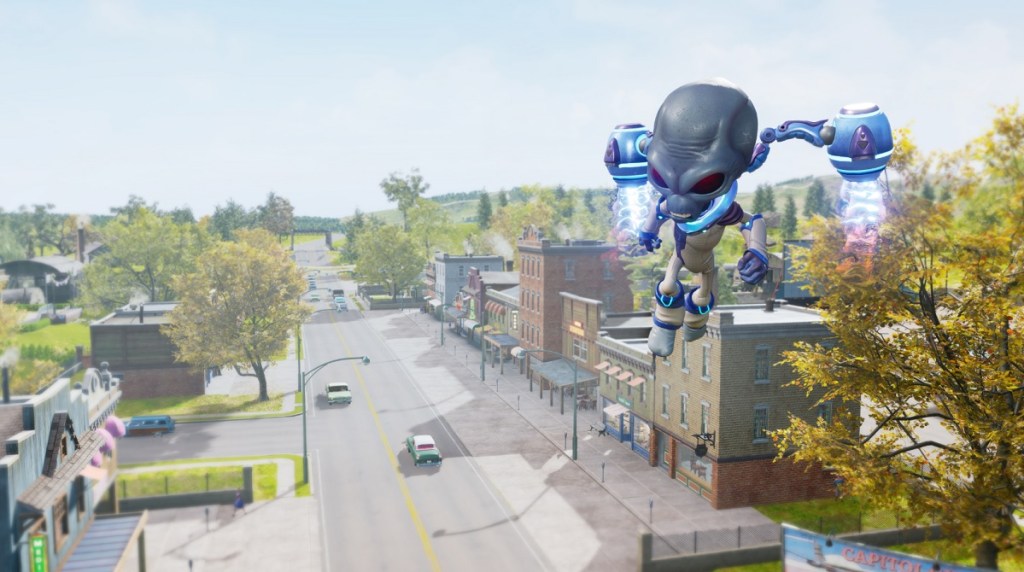 Above: A new spin on “jetpack joyride.”

GamesBeat: Is there a subtitle to the game, or is it just Destroy All Humans?

Karaagacli: THQ can answer that question better. It’s a complete remake of the original game. I don’t know if it’ll have a tagline eventually, but for now it’s just Destroy All Humans. It’s a pretty iconic name.

GamesBeat: How much of a remake is this?

Karaagacli: It’s a full remake in the sense that we’re staying faithful to the original design, but everything is made from scratch. As you’ve seen, we have the visual strengths of Black Forest coming out. We’ve modernized a lot of the controls, the flow of the run and gun experience.

We’ve taken bits of features that we know were improvements in the sequel to the first game and put them in. One example is the dash, which was only in the second game. We’ve added that here, and evolved it to have more of a skating motion. If you hold the dash button and press down, Crypto will skate along the ground, which gives you better mobility for shooting stuff. That’s where the fun of the game comes out. 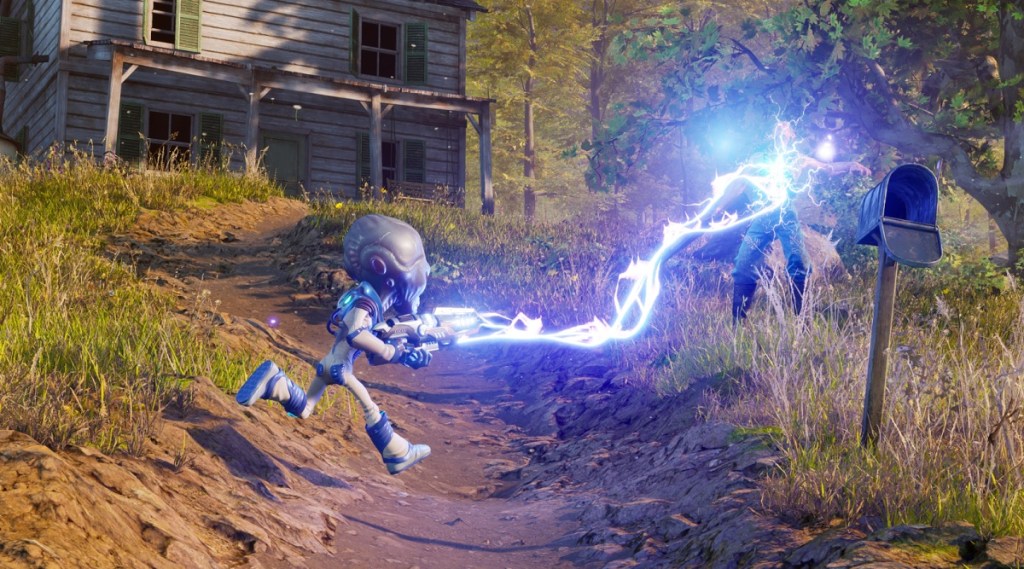 Above: Fast as lightning.

GamesBeat: Why did you want to remake this game?

Karaagacli: For us, it’s a natural continuation of what we learned in Fade to Silence as far as the engine, the tech, how to deal with large open spaces, how to deal with the way certain effects have to behave, and so on. Now that we’re under the auspices of THQ Nordic, which owns the IP, it seemed like a good fit. We did a few prototypes that were well-received.

GamesBeat: Was there a certain kind of player that liked the original games?

Karaagacli: The advantage of working on a remake is that it’s been out there for a while, since 2006. You had the two main games, and then two other games followed them. We have access to a lot of information about the strengths and weaknesses of the series in its original conception. The humor comes up as one of the key strengths, for example. It’s humor from 2006, but it seems like it still works. The remade cinematics and the characters, the variety we can add, keeps that alive.

We’ve also learned that certain parts of the combat weren’t so smooth. In order to modernize that and make sure — every time someone picks up a controller, they have a certain expectation of how it’s supposed to work. As we do that, we improve the game in that regard. But the humor is timeless. We hope it’s going to come out well. The very first joke in the game sets the mood, when he lands and steps on — yeah. We’re hoping it’s going to be interesting.

The one thing we really want to make sure is always the case in Destroy All Humans is that it’s accessible. It should be a very accessible, run-and-gun combat game that’s not — when you look at it from the top down, it shouldn’t be very difficult. That doesn’t mean the game is shallow. The way the features play together should give you a nice experience. But at its core, it should just be fun destroying humans and human-related stuff. 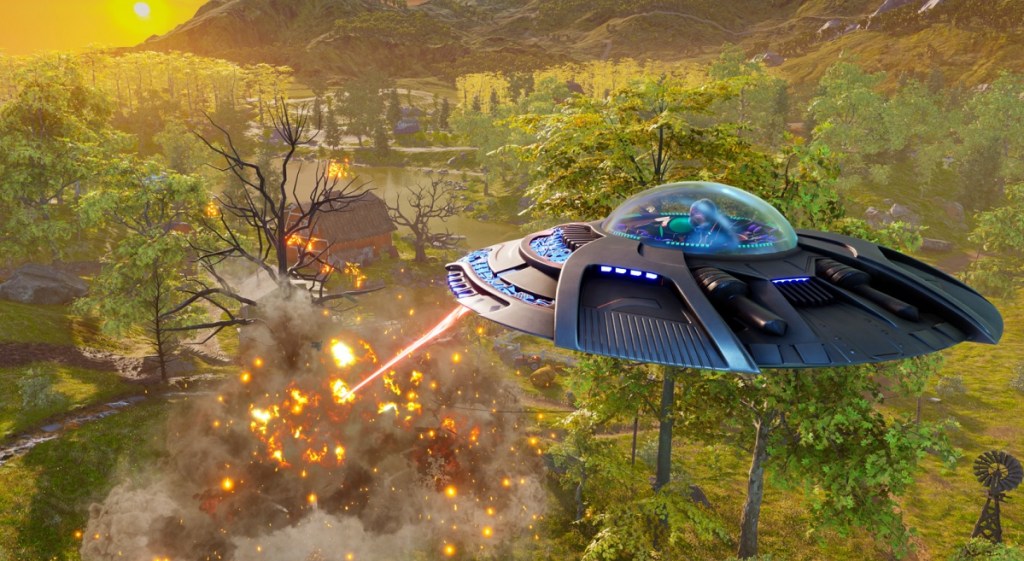 GamesBeat: Are you thinking about doing multiplayer?

Karaagacli: We’re going to stay true to the first one in that regard, so we’re not planning on doing a multiplayer mode just yet.

GamesBeat: Are you aiming for a global market?

Karaagacli: We’ll be localizing the game into about a dozen languages. We expect it to be a global game, hopefully as good as the original game.

GamesBeat: How many hours do you expect it to run?

Karaagacli: That’s a good question. It should be at least 30 or 40, but I wouldn’t quote me on that quite yet. It’s not a short game at all, though. We’re hoping to add a lot of replayability with the open world component. You have challenges. You have upgrades. You might want to destroy stuff with the UFO, or you might want to destroy stuff on foot.