VB: What about outside investors? Do you bring them in at all?

Berkes: We don’t. This is purely an internal development pipeline. The idea was to be able to build completely self-contained businesses within the company and really be able to focus on capturing the ideas there.

VB: Do you absorb them all, or do you then, at some point, seek to spin them out?

Berkes: We are open to spin-out, if for some reason we generate a high-value business and it just doesn’t fit CA’s strategy at the time they’re ready to be incorporated into the broader organization.

Let me spend a minute on that. A startup, a classic external VC-funded startup, is going to go through a number of rounds of investment. The exit is either an acquisition by another company or an IPO. Our exit is a bit different, because these are already CA employees. These are incubations that are entirely contained within the walls of the company. Our exit is into the mainstream business units, one of the BUs. Getting back to your original question, if we’ve got a great-looking business that doesn’t quite fit one of the BUs for whatever reason, we’d absolutely explore spinning that out. The goal here is to generate business value for the company. Whatever the best route for that is, it’s something we’d explore.

VB: Are you getting to some being at that stage now?

Berkes: It takes, realistically, four to five years — three if you’re super lucky — to really incubate something all the way from an idea to a proven business that’s scaling in a high-growth way. We’ve only been at this for less than two years. Our pipeline isn’t quite full. It’s going to take another — call it 12 to 24 months to really fill up the pipeline.

That said, we have had one exit. It was a little bit different from an exit of a product. In this case it was an exit of a technology platform. It’s a bit of an interesting story. We had an incubation that, as a product, as a stand-alone business, we decided it just wasn’t going to work. But in the journey of getting to that point, the team had built a technology platform where we said, “Hey, there’s something of potentially permanent value here. Let’s not discard it with the business that didn’t work out. Let’s see if there’s a way to leverage that value, either as an externally facing product or as an internal technology.”

We went the internal route. We exited that platform, which we call Jarvis — it’s an advanced analytics platform – into the product organization, where it’s been incorporated as the analytics engine for several products that are on the market. Absolutely a successful exit. A bit of a hybrid. But the goal here is ultimately to generate business value for the company, and we were able to do that effectively.

We currently have 11 incubations up and running inside the company now. They’re geographically distributed. The management of all the incubations is out of this office. Howard, who led you around, has all the incubations reporting in to him. He is the top-level manager for the incubations. But we allow them to be wherever the idea happens to originate. We have a number, for example, in the Boulder-Denver area in Colorado.

VB: And then you only take CA employee ideas, or do you take them from outside as well?

Berkes: Currently it’s intended to capture internally generated ideas. It makes it so much easier in terms of IP, and ultimately we want to make sure we harness the full potential of our employee base. 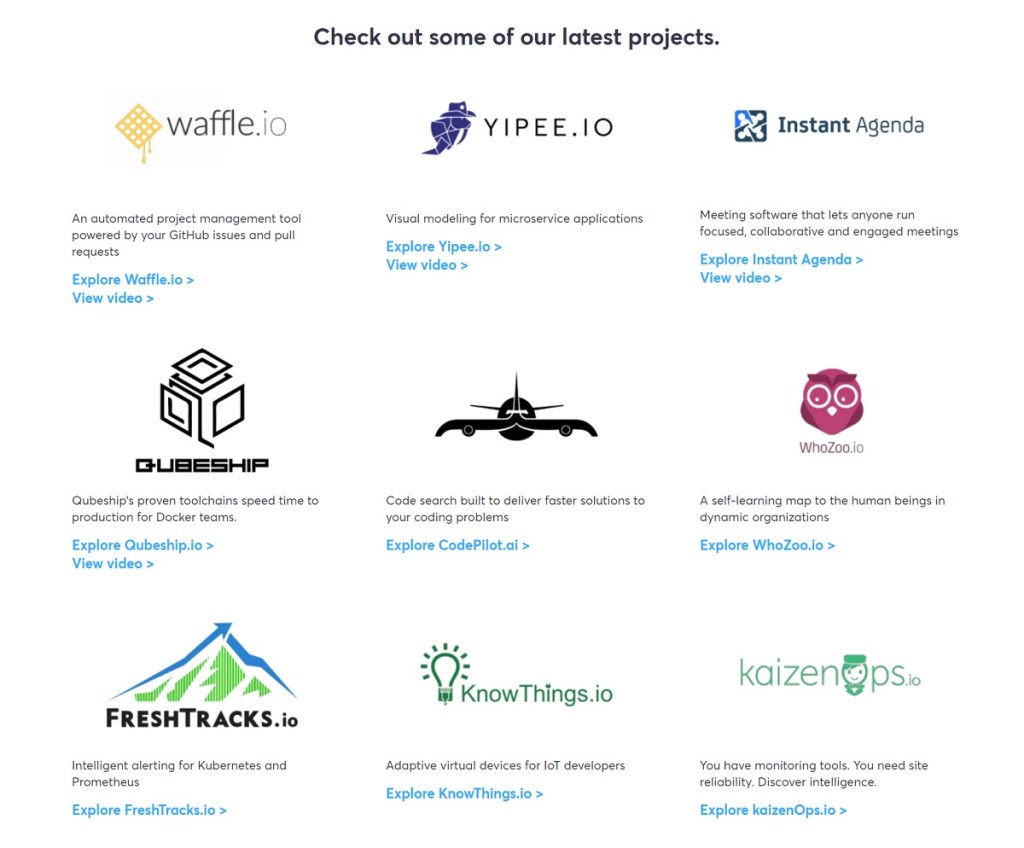 Above: CA’s accelerator has internal startups.

VB: So they don’t just go off to Sand Hill Road and raise their own money, do you have an incentive for them to stay inside? Is there some reward if they exit?

The other benefit you have is the wealth of experience that we have as a company. When you come in as an incubation, we put together an advisory team, on a very custom basis, to help your incubation along. If you have special expertise you need from finance or marketing or sales, or if you have special requirements from an HR perspective, we can pull from a very broad base of talent and create essentially a tiger team to help your incubation along. Yes, external startups have advisory teams, but we can draw from an incredibly broad base of talent within the company to help you succeed.

We have also de-risked the process of coming into the accelerator and doing a real startup. We have an incubation rotation program that, for a certain period of time, guarantees your return to your original organization if things don’t work out. It’s very much a safe landing model.

There’s also a component to the accelerator that creates a lot of value. No matter how things turn out for any employee that comes in, we put together a really rich program, an education and support program, to build new skills for people coming in to do this. No one wakes up and becomes an entrepreneur and has all those skills overnight. We have boot camps. We have training programs. We have very much hands-on support to get people skills they didn’t have before. In many ways it’s a leadership and skills development program as much as it’s a means to grow new businesses.

Given that fact, for incubations that don’t work out, our expectation — and we provide a lot of help in this process — is that these folks go back into CA smarter, with new skills, having been enriched by the experience. Ultimately, over the long run, we make the company more effective, having built the muscle memory for what it looks like to do new organic product development.

On the hard side of the equation, you asked about the reward piece. We have established a reward structure for founders that we’ve been — it’s been challenging to come up with something that works within the construct of a large-scale business like CA, but also is competitive with doing an external VC. We’ve been working and collaborating with our finance team, our legal team, and our HR team, and we’ve come up with a founder reward that uses startup best practices to model something similar to what the typical exit would look like.

We’re not going to be as rich on the high side as a unicorn. But we have something we think is quite compelling to an innovator who comes in and builds a successful business.

VB: They could make, I don’t know, millions, depending?

Berkes: It depends on the business, absolutely, depends on the outcome. It’s a revenue-based model. Think of it as revenue sharing for some period of time. Each one is going to be different, but if they build some incredible business that’s scaling up, they’ll get more than one that’s good, but not as high-performing.

VB: The one you described, that seems like a one-time purchase that becomes a feature of some other product. Is the revenue-sharing hard to figure out?

The interesting thing to note is that the 11 incubations we have in the pipeline, all of them came in before we had that financial reward structure in place. That’s worth noting. Yeah, it’s great to get the financial upside, but really, the thing that gets people in the door is their passion. They have an idea. They want to pursue it. They want to create an impact in the market and something new, something meaningful. They’re coming for the impact. It’s great that we’ve been able to get this hard reward structure in place, but that’s not the primary motivator, at least with the cohort we have.

VB: Do you have any lessons out of the Xbox case, since that was an internal project as well? 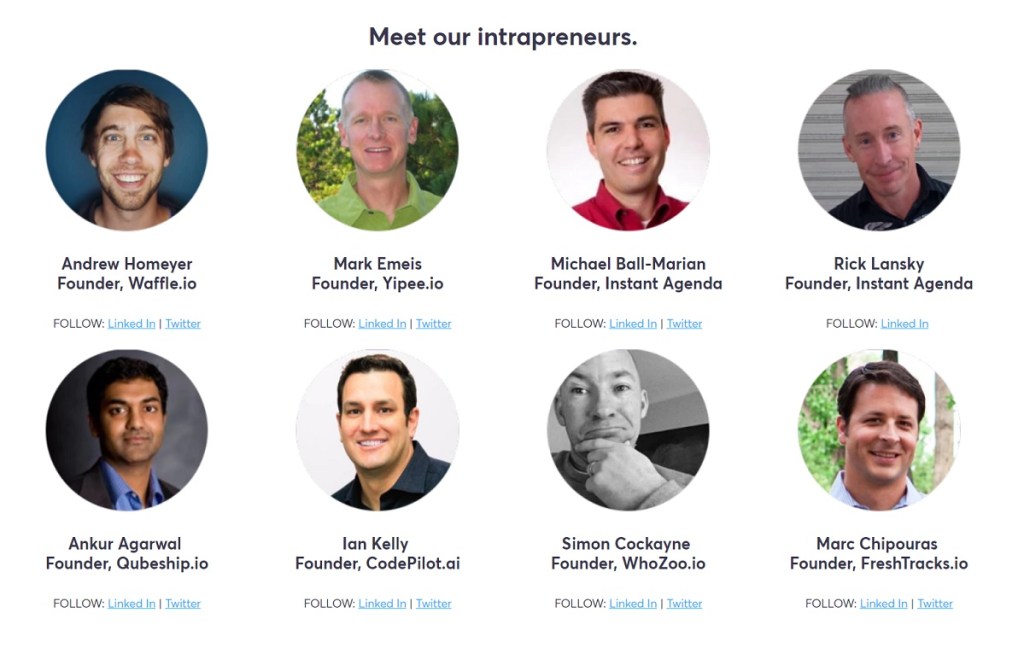 VB: What’s your bonus out of that?

Berkes: [laughs] You don’t want to talk about that. I wish I’d gotten a rev share out of there, but no such luck. Again, my primary motivation wasn’t a financial one. We were passionate about this idea, going down a different path and making an industry impact.

Xbox is an interesting contrast to this kind of incubation. It’s an important distinction to make. Xbox was absolutely all about fast follow. There were existing, well-defined competitors in the market. The market segment was well-defined. The market opportunity was well-defined. Yes, you had to put something out on the market that was compelling, that had some unique differentiation, but there wasn’t a question that there was a console market, an interactive entertainment market that was large and growing.

At the opposite end of the spectrum here, where the incubations are in a greenfield, they’re not even sure sometimes who the target market segment is. The business model may be unclear or undefined. It’s very much a different type of process, where they’re trying to find out if there’s a there there, with the business they’re trying to incubate.

A large part of the reason why I was excited to follow lean startup best practices — because the danger with this kind of greenfield incubation is that you invest too much too soon. Then you find out, oh, well, actually there isn’t a viable business model here. Or we build the wrong thing. We forgot to talk to customers before we started building something and didn’t get enough market validation. We try to never invest ahead of data that tells us we should continue to invest.

In fact, we structured it — we have two very lightweight seed rounds, and then three more significant series rounds. The seed rounds are all about making sure that you’ve identified a problem that customers actually have. Also, importantly, if that’s true, then you can actually create a solution to that problem, a viable solution to that problem. That’s what those two seed rounds are about. We’ve structured them such that — we’re talking up to maybe a maximum of four people in those two series rounds. We’re not actually building anything at that point. We’re making sure that we’ve identified an opportunity that’s actually worth pursuing at the next step, which is to build something.

The rubber really starts hitting the road with series A. Series A is all about building a minimum viable product. The keyword there is “minimum.” Only what you need. Leave out the bells and whistles. Build the minimal chunk of value that will help you determine whether or not customers are actually going to adopt this product idea or not.

Along the way there’s the potential for pivots, but — start out with an MVP, and if you start getting market traction, go to series B and C. By the time you get to series C, if you happen to make it — and most incubations, to be clear, will not, just like any VC — you’ve proven the business model. You’ve proven market growth and market traction. You’ve demonstrated that there is a great product-market fit. You’re ready to scale up at that point. That’s the point at which we exit the business into the mainstream product organizations.