The female-run company, formally called Uccellini, submitted its application for a CES Innovation Award — and it won. That gave it the right to exhibit at CES Unveiled, a pre-show party attended by many of the 6,500 press attending the show. But CES rescinded the award in October, and Lora DiCarlo’s sex toy was denied its chance to exhibit.

But Lora Haddock, CEO of Lora DiCarlo, didn’t go quietly. She raised a stink, and she probably got far more publicity than she otherwise might have because of her claim about the unfairness and inconsistency of the Consumer Technology Association (CTA), which runs CES.

“[Lora DiCarlo] does not fit into any of our existing product categories and should not have been accepted for the Innovation Awards Program,” said spokesperson Sarah Brown, in an email. “CTA has communicated this position to Lora DiCarlo. We have apologized to the company for our mistake.”

John Parmigiani, associate professor of mechanical engineering and director of industry research and outreach at Oregon State University, said in an interview with me that he was struck by the amount of research and detailed design that Haddock had done. He helped the university’s robotics lab turn the design into a product. He said he was stunned at CTA’s decision to take away the award.

I caught up with Haddock and Sarah Brown, director of marketing at Lora DiCarlo (clearly not the same as the CTA’s Sarah Brown), for a discussion about the issues this raised in a time of both #MeToo and female empowerment through “sex positive” products. 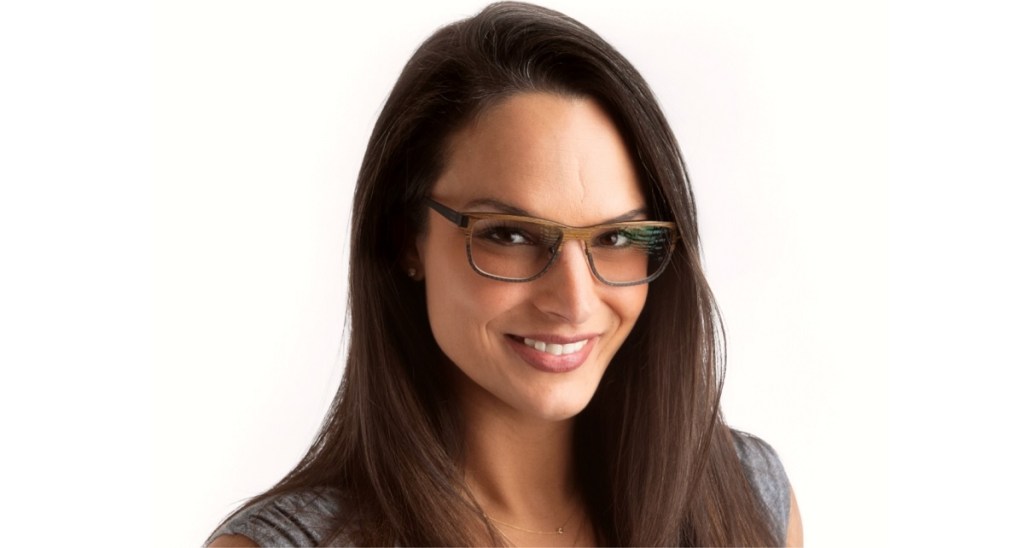 VentureBeat: Is “Lora DiCarlo” actually a brand name? Was that a name that came from somewhere else?

VentureBeat: Did that just sound like a good name for the company?

Haddock: [laughs] One evening I was with a couple of folks in a hot tub and a couple of glasses of wine and they said that sounded like the greatest thing ever, so we kind of ran with it. It’s working for us so far.

VentureBeat: Where do you stand now? Are you thinking of filing a lawsuit, or taking some other next step here?

Haddock: No, no lawsuit. To be honest, I’d love to bury the hatchet with CES if they’d consent to right their wrong. But we’re just going to continue to march ahead. Obviously, we plan to expose this, because we feel that it’s very biased. But we’d much rather spend our time focusing on our company and our product rather than digging ourselves into a lawsuit.

Brown: I think a large part of it for us is just that this is a conversation, this issue with gender bias at CES and gender bias in tech, the hostility in general to women and, I suppose, non-male participants in tech and at CES. It’s a conversation that’s been going on for a long time, and as much as we keep hearing “We’re diversifying, there are so many women involved,” the reality is that every year we have another problem, another thing exposed. Last year and the year before that they had no women keynote speakers. This year they finally made it 50-50, which is great, but realistically — if all it is is cosmetic, this is a conversation that needs to keep going. The Innovation Award is just another example of that problem continuing.

Haddock: Basically, the motivation behind this is to some real action and real change where gender bias is concerned within CES and the tech industry. The CTA, the Consumer Technology Association, is a big player in the tech industry. They have the power to make a big impact and make some amenable changes that level the playing field. This is an opportunity for them, rather than a strike against them. I’d like to see them make some real changes, and not just a couple of cosmetic things that they’re trying to patch up. 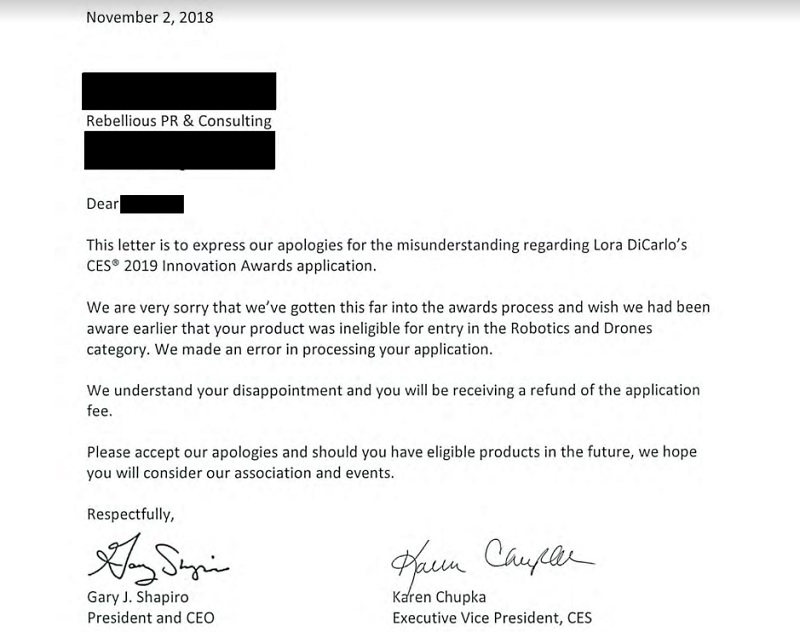 Brown: We have no delusions that we’re going to get our award back. But this is another opportunity for women, for non-binary folks, and for non-gender-conforming folks to stand up and speak out for themselves. We’re taking the opportunity to do that.

Haddock: That’s a big part of the conversation with female CEOs and female founders and female-focused products. In the startup world we don’t have as many opportunities to get venture capital funding. Women especially will just keep their mouths shut when stuff like this happens. When there’s impropriety in funding, impropriety in the way things are run, we keep our mouths shut because it’s dangerous for us talk about it. We’re perceived as complaining, or someone who’s difficult to work with, when all we’re asking for is equality.

VentureBeat: I did think it was very strange that they’ve allowed various things into the show that you’d not expect, given what their answer was as far as policy. You had Naughty America, OhMiBod, Solana. A lot of their offerings seemed less tame than yours. It gets hard to parse the logic or the thinking as to what gets in and what doesn’t.

Like you said, they have Naughty America on the floor. They have more explicit products on the floor. But they’re geared toward men. Where women are concerned we have products like breast pumps, vacuum cleaners, Kegel exercisers. There’s a stark difference between what’s allowed. 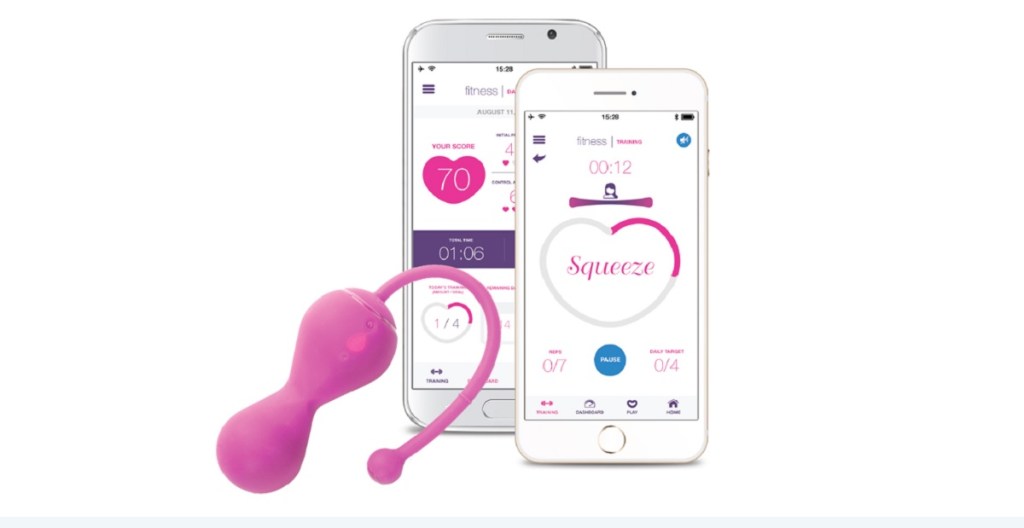 Above: From CES 2015: Lovelife Krush from OhMiBod helps women do Kegels and promises better sexual health.

VentureBeat: Naughty America does say that they’re in a meeting room, as opposed to the floor.

Brown: They do have a divider. They have it hidden. I’ve seen a video of what their event space looks like and how it ends up. It’s interesting. But again, the fact that we’re talking about it, the fact that they’re there at all — they’re still present, and they’re able to present conversations that say, “We are at CES.” Even if they’re hidden, they’re still allowed to be there.

Haddock: Solana, the sex android, was not hidden whatsoever. She had a live interview that was done right there on the CES floor. There was no hiding that. To each their own, but that’s extremely explicit. There’s no hiding what that is. There’s definitely a double standard there.

Brown: There’s a place for everything. All of society right now — our entire industry, sex tech and pleasure tech, is going mainstream. You can see massagers in Sharper Image. You can see massagers in Brookstone. You can buy them in the store at CVS, albeit not at the price points these products should be sold at. Everything is going more mainstream. People are becoming more aware of the importance of sex and sensuality to general well-being.

I understand not wanting to have completely naked women on banners. Or naked women walking all over the floor, for that matter. But there’s a dissonance there, where you can be obscene, but only in certain ways.

VentureBeat: Have you done any research that’s been illuminating around booth presences over the years? It seems to me, having gone to the show for 20 years, there are a lot fewer booth babes than there used to be. I don’t know if it just shifted toward the fitness section, but not so much in the general area.

Brown: I agree, definitely. That’s why, when we talk about booth babes, we’re not really talking about that in the present tense. It’s important to point out the history. Very clearly CES has made great strides. Compared to what it was in the ’80s, today it’s very different. But we can’t pat ourselves on the back, or the CTA or anybody else, until there’s real parity.

As we said, we’re not planning on suing. We’re not getting angry. We’re not in an anger mode. We’re continuing a conversation that’s been happening for a very long time.

Haddock: They’ve made some changes over the years, and I commend them for that. But when you’re presented an opportunity to truly make waves — this industry really needs a more level playing field. When you’re presented an opportunity by a young company that’s been founded by women, that’s run by women, that’s extremely innovative, that’s partnered with one of the top robotics schools in the country to create this tech, whether it’s sex or not, you should be chomping at the bit to bring that company in.

Brown: In the end it’s really not just about creating an equal playing field. Every study that you look at out there, it’s to the benefit of any industry to involve more female CEOs, to involve more female-led companies. It’s not just equality. It’s also profit. People make more money. Innovation grows. We’re looking at different perspectives on how we approach technology, in every field.

This is something we said in the open letter, but the future of health tech could very easily be inside a sex toy. It could easily be in a vacuum, too, but that’s not quite what we’re talking about right now. [laughs] There’s just so much that can’t easily be dismissed.