Cheetah Mobile is one of China’s entrepreneurial success stories. In eight years, the company grew its utility apps business into a giant mobile internet company with 623 million users worldwide. And now the company has set up a new U.S. headquarters in Silicon Valley, as it plans to grow into an even bigger global firm.

The company opened its office in Palo Alto, Calif., where it already has 60 out of its U.S. workforce of 100 employees. All told, Cheetah Mobile has more than 2,700 employees, and it is rapidly expanding into new areas, such as news aggregation and live broadcasting. In turning to the U.S., the company hopes to find expertise in artificial intelligence research that will help its core mobile internet businesses.

Charles Fan, who joined as chief technology officer earlier this year, is serving as the U.S. general manager. He held a dedication ceremony on Monday evening, along with Ming Xu, president of the Beijing-based company. Both Fan and Xu noted that 80 percent of the company’s business comes from outside of China, making it unique among Chinese tech companies. And they hope that will be the company’s advantage as it goes global.

“We plan to operate a dual headquarters,” Fan said in an interview with VentureBeat.

Cheetah Mobile is growing fast, but it is used to speed. It went public in 2014, just a few years after it was founded. According to the consul general of China, Chinese investments in the U.S. were up 193 percent from January to August. 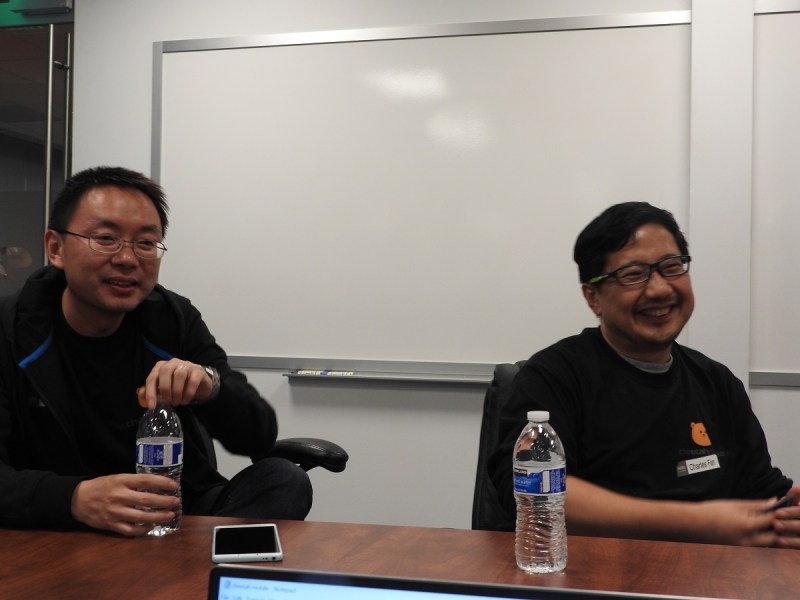 Xu and Fan said the new office will play a vital part in Cheetah Mobile’s evolution from a utility app developer (Clean Master and CM Security) to a mobile content company. The company announced its new content strategy earlier this year, with three key areas of product focus: mobile news, live video broadcasting, and casual mobile gaming. Fan said much of the revenue still comes from utilities, but the new parts of the business are growing fast.

Xu said he and Cheetah Mobile CEO Sheng Fu came to the U.S. in 2012 and were blown away by the Silicon Valley technology they encountered at places such as the Google I/O conference. They concluded early that they had to become a global company and determined that they wanted to engage in a “KFC” strategy. While many companies have been “copied to China,” — like Google being copied by Baidu — Cheetah Mobile wanted to be part of a “copy from China” (using a deliberately misspelled “kopy”) strategy, bringing Chinese technology to the rest of the world.

“If you have a dream, you have to try,” Xu said, during the dedication ceremony. “We had a very crazy dream. We come from a Chinese company, and we want to be a global company. For us, that is a crazy dream. But we don’t just want to think. We want to do. Today is the start with our dual headquarters.”

Fan said, “Cheetah is very brave, very fearless. It’s like driving on the 101 freeway. Six years ago, we were nothing. But every time we move offices, we have a bigger team.”

In addition to livestreaming and news aggregation, Cheetah Mobile is also investing in casual games. Its Piano Tiles 2 game has been a huge hit around the world, and the company recently said it would publish Badland 2 on Android.

“We believe the U.S. is still the leading market in the world,” Fan said. “If we are successful in the U.S., it is relatively easier to extend that to the rest of the world. We want to establish a top-notch team here in the U.S.”

Fan said the company would create an R&D center around A.I. technologies. Technology such as machine learning could be very useful in the News Republic app’s news aggregation, as it has to remove content deemed “inappropriate,” as well as identifying interesting stories that users will want to read. Fan noted that the average reading time for the news app is 20 minutes, which means that advertising on News Republic is effective in delivering advertising revenue.

“A.I. is at the core of our news aggregation product,” Fan said.

He said Cheetah knows that other Chinese companies have not always been successful in the U.S. market. But he noted that many of those had large businesses in the domestic Chinese market, where they focused most of their attention. He believes that their efforts in the U.S. failed from that lack of attention.

Fan said that Cheetah hopes to do better, because it is in the unique position of having so much overseas business. He also said that the mobile internet and its global culture has removed some of the barriers between the countries.

“We are making good progress in our transformation,” Fan said. “Most of the revenue comes from our utility apps, but we are seeing very strong growth in the new businesses.”