Chirp, a London-based technology company that lets you transfer data between devices using nothing but audio clips, has announced it’s opening its platform to developers as it looks to increase the uptake of the underlying technology. 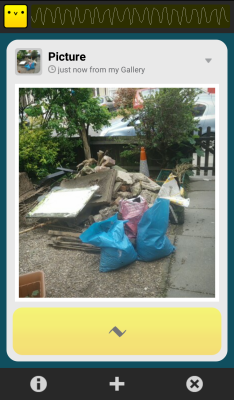 Available for Android and iOS, Chirp made headlines back in 2012 with its quirky data-transfer technology that uses a “digital birdsong” only identifiable by Chirp on other devices. Just select a compatible file from your phone, click the “chirp” button, and other devices can access the media instantly.

Each chirp lasts a couple of seconds, and the receiving device “listens” for a handful of notes played quickly in a certain order, in a certain range, and at a certain speed. While there are other easy ways of sharing files and data in real-time, such as Bluetooth, Chirp doesn’t require devices to pair in advance, there is no need to set up an account, and it’s ultimately a much quicker way of sharing files.

That said, with Chirp, the file itself isn’t sent peer-to-peer, and the data doesn’t actually travel directly via audio. Chirp merely decodes and encodes the file, with the associated sound serving as the delivery mechanism. A link is generated for the recipient(s) to access it on Chirp’s servers, but the process from sending to receiving is seamless and near-instant.

With the launch of its software development kit (SDK) in private beta today, Chirp is making a move to become a platform for third-party developers — and this could prove pivotal for significantly ramping up the use of Chirp’s technology. Indeed, any app that offers any kind of content-sharing functionality can leverage Chirp to make content a little bit easier to share and access, be it URLs, e-tickets, or videos.

With that in mind, Chirp for iOS has been given a notable update today. It now lets users chirp videos too, having previously been restricted to images, notes, and URLs. Based on our tests, “video chirps” work flawlessly, and given the rise of mobile video, this upgrade could prove a valuable link in Chirp’s chain.

Next week also heralds a milestone moment for Chirp, as the company shakes off its mobile roots and launches a Chrome plugin that will take its technology onto Macs and PCs via the browser. This will let users chirp webpages to their phones, an easy way of grabbing map URLs, phone numbers, or other information.

Chirps are an effective way of sharing data with multiple people at the same time — as long as their phones are within audio range of the sender. This means it could also be used by mass broadcast networks such as TV and radio to send files to millions of people in seconds. However, it could also connect with physical objects such as toys, letting children download content from sound clips embedded in their favorite teddy.

This is enabled through a just-announced tie-up with Arduino, an open-source computer electronics platform for hackers and prototypers. It means that Chirp encoders are available for the burgeoning Internet of Things industry, and they could be included in any number of objects in the future. “Chirpino,” as the service is called, is being released tomorrow (May 13) as a free download.

Chirp’s technology is certainly smart in terms of how it has been deployed, though it is of course loosely based on pre-existing technology — for example, audio tapes were once used to load applications on home computers such as the ZX Spectrum, while dial-up modems also used sound to access networks. That all said, Chirp says it has a patent pending on its technology for the transfer of short codes over-the-air (OTA).

For now, Chirp can still be filed under “potential,” which is perhaps a little disappointing given that the first Chirp app launched three years ago now. Indeed, it’s still very limited in terms of what files you’re able to transfer between devices on mobile, though other common file types will be supported when the web-based version of the service comes to fruition.

Also, there is currently no way to download a file  — offline access is enabled through caches within the Chirp app, but what’s really needed is full, peer-to-peer transfers that lets anyone download a file or document. We’re told that this is in the works, though no timescale was given.

The company’s first foray into licensing its technology via an SDK indicates how it intends to make money in the long term. For now, however, Chirp is exploring other conduits to ensure it has capital at its disposal. Today it opened a crowdfunding campaign through Crowdcube, and at the time of writing it’s already reached half of its target £400,000 ($630,000) goal. All funds will be used to support commercial expansion and develop the Chirp platform.

“We’re a small company with big ambitions — we’re creating an Internet made of sound, and we’re delighted how people have embraced Chirp to share information,” said founder and creator Patrick Bergel. “It’s even more exciting to have a long waiting list of developers wanting to get their hands on our SDK, so their apps can sing too.”

Spun out from the University College London (UCL) back in 2011, Chirp now has 12 employees and recently brought in Richard Mann, former COO of Mobile Interactive Group (MIG), as its new CEO.