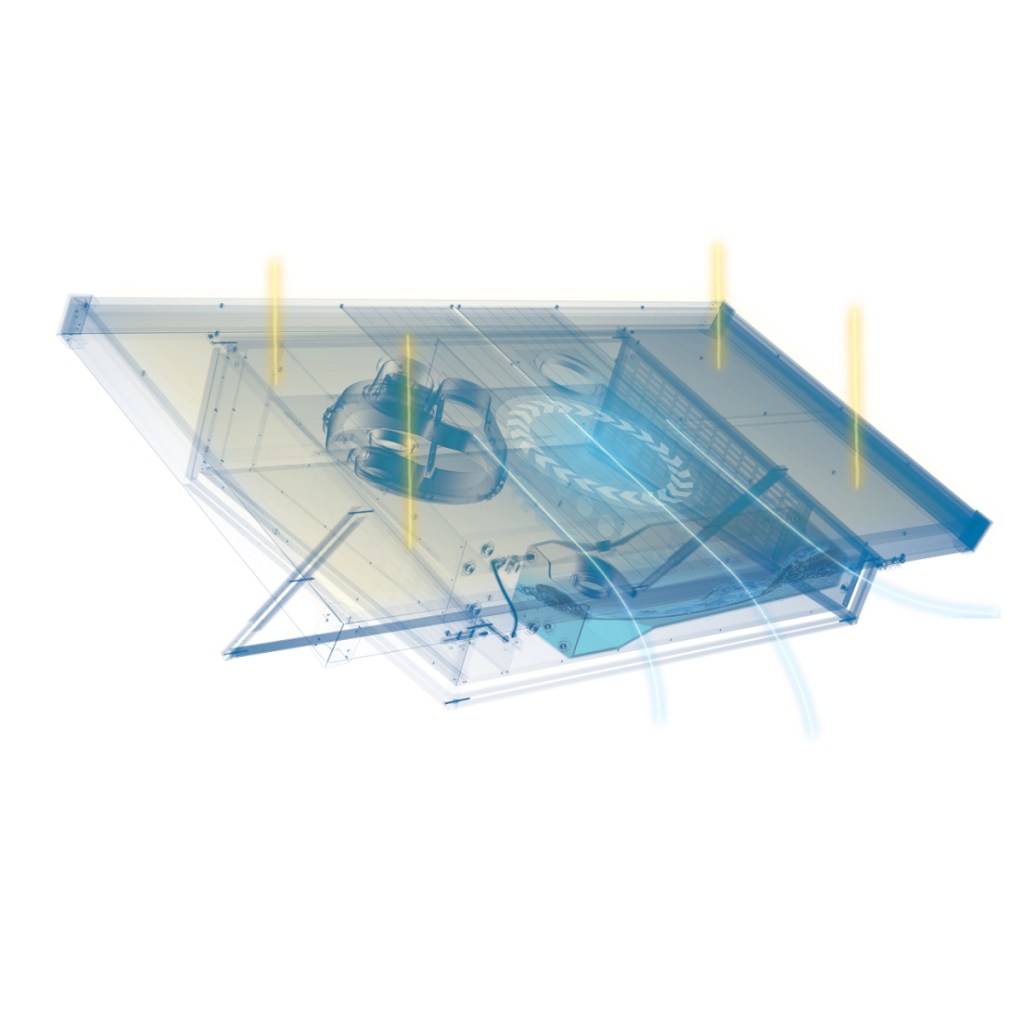 Above: An X-ray view of the Source Hydropanel.

VentureBeat: How much water can it produce, ideally?

Friesen: Two of these panels, which would be a typical residence in the U.S., would do the equivalent of up to 600 bottles of water a month. It’s a ton of water for a family of four. I have two of these panels at my house with four humans and two dogs and it’s all we drink and cook with. That’s in Scottsdale, a very dry place. In the driest months it’s three to four percent relative humidity. In the wettest months it’s 15-20 percent. But it’s a fundamental shift in the way I think about the water I get.

VentureBeat: Does the environment around the panel affect how well it works, then, how fast it can make water?

Friesen: The way the science works, we’re creating our own environment internally. When the relative humidity is lower, it’s a longer thermodynamic putt, if you will. Whereas if it’s 95 percent relative humidity, it’s very short. When it’s very dry out, though, when it’s 10 percent relative humidity, you have a ton of sunlight. Those things tend to balance each other out. In a place like Vanuatu or Manila, where the humidity is very high, but you might have spotty clouds or more haze — instead of 1200 watts per square meter, you might be down to 700 — it balances out.

What’s happening inside the panel, the primary materials are absorbing water from the air. Once we release the water from those materials, it goes into a second set of materials that ratchets the humidity up higher in order to drive condensation. We’re raising the dew point internally so it’s always above ambient. There are no cold surfaces inside. It’s all hot surfaces or ambient surfaces.

VentureBeat: Where are you now on your road map?

Friesen: We just closed our series C. That was announced by Breakthrough Energy Ventures. They led that. They came in the previous round as well. That’s obviously very focused on one thing, which is climate change. You’re very familiar with them, I’m sure, Bill Gates’s billion-dollar fund to solve climate change. That was an extraordinarily intensive diligence process. A large number of PhDs work there and peel back all the layers. In addition, they really understand the potential environmental opportunity.

It turns out that five percent of the U.S. carbon footprint is related to treating water in bulk. Somewhere between one and two percent of the global carbon footprint relates directly to bottled water, which is insane. That’s not just rich people in the U.S. drinking bottled water. That’s people in the rest of the water that need bottled water because they don’t have good municipal supply. If you could offset even a reasonable amount of that very dirty water, you fundamentally change the trajectory on climate change. 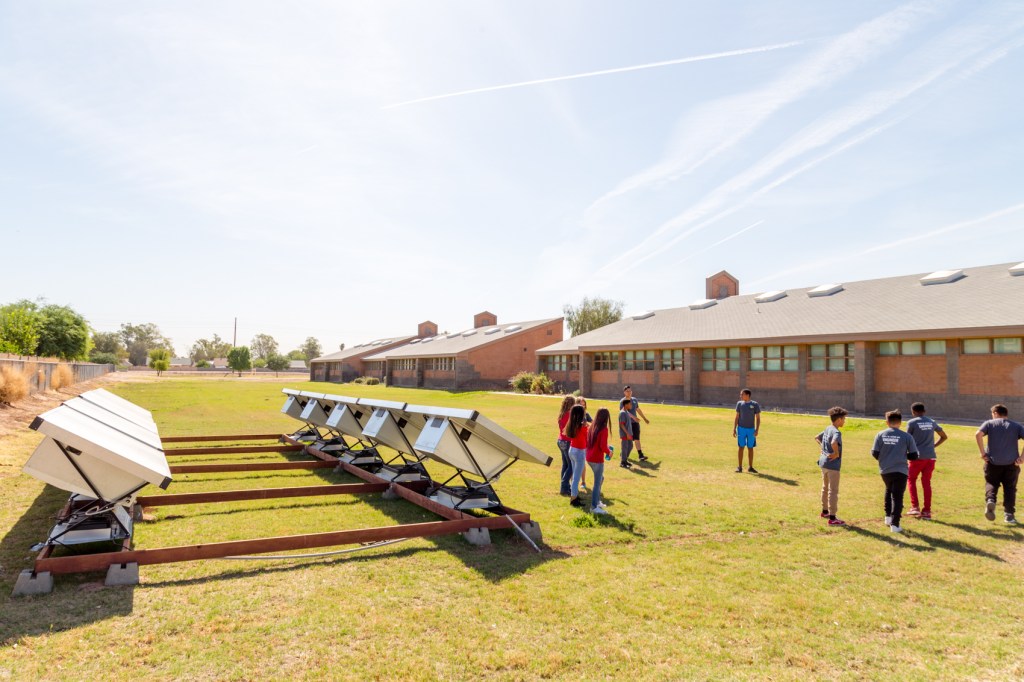 VentureBeat: Have you calculated how many other water sources you’ve been able to replace in some way?

Friesen: We haven’t thought about it that way, but I’m sure we could do that calculation. The most important thing from our perspective–the water you put in your body is the important stuff, not what you use to flush the toilet or whatever. We tend to have this interesting perspective in the U.S. around all this potable water, but it’s not quite potable. So what people do is then leapfrog the infrastructure by buying bottled water. What we enable is drinking water that is intrinsically clean, without having to make a dirty choice.

The company is now in four separate car dealerships in Scottsdale. We’ve repurposed several ex-car dealerships. Our main office was a Volvo dealership. Our manufacturing is in a Chrysler dealership. What’s cool about that is it gives us a huge amount of space to build this thing in the U.S., to have the funky elements of creative space that are harder to find in a new city like Phoenix. We’ve got big glass windows and round spaces. That’s been a neat evolution for us.

VentureBeat: How many people are working for the company now?

Friesen: We typically don’t talk about the numbers. I don’t like putting a stake in the ground. But I can say right now that we have about 20 open requisitions today. We’re on a pretty heavy growth trajectory. We’re on a rocket ship.

We almost exclusively work with local partners. That’s a big part of our philosophy. We want local labor, local engagement, local ability to install. You look at the statistics around job growth in the U.S., number one is all around solar installation. There’s an opportunity with these renewable technologies to set a foot down in places in a way that’s positive and drives the economy, rather than the incumbent way of getting water, bottling it and shipping it in. That’s purely extractive, from a point of view of economies. As I say, we have highly localized installation, so those people don’t end up on our payroll, but we’re paying them to do those jobs as contractors.

VentureBeat: It seems almost magical. Do you have a hard time convincing people about the science?

Friesen: Surprisingly, no. When people experience it themselves, they get it instantly. If it’s at your school and you have 10 panels that have been making water for the last year, it’s just a fact.

Early on–maybe fortunately or unfortunately, in our society, everything that looks to change the game always drives questioning and cynicism. “Wait a minute. Why would you go down this path? Nobody else is talking about this.” Yeah, but look at the problem. Look at the opportunity. Look at what we could solve. Early on, there was a ton of that.

When I went to raise the series A, though, it was an absolute dogpile. That was great. We were able to be very thoughtful about who we brought into the cap table and build it the right way. I like to say I curated our cap table. The series A lead is a small group called Arnerich 3×5, out of Portland. It’s a sidecar to a very large wealth management firm, tens of billions of dollars, which is basically an aggregate family office. They’ve been a LP in a bunch of big venture firms. They set up their own sidecar that led the series A. We’ve had a number of other investors that we don’t tend to talk about, unless they’ve chosen to make it public.

Arnerich 3×5 has been a phenomenal partner for us, and then Breakthrough Energy, of course, has 22 of the wealthiest people on the planet thinking about climate change. Here’s an aggregate family office that’s thinking about solving big problems, and here’s a very different aggregate family office on a much different scale that’s helping solve big global problems. When you’re articulating something new, when people finally get it–this particular one resonates.