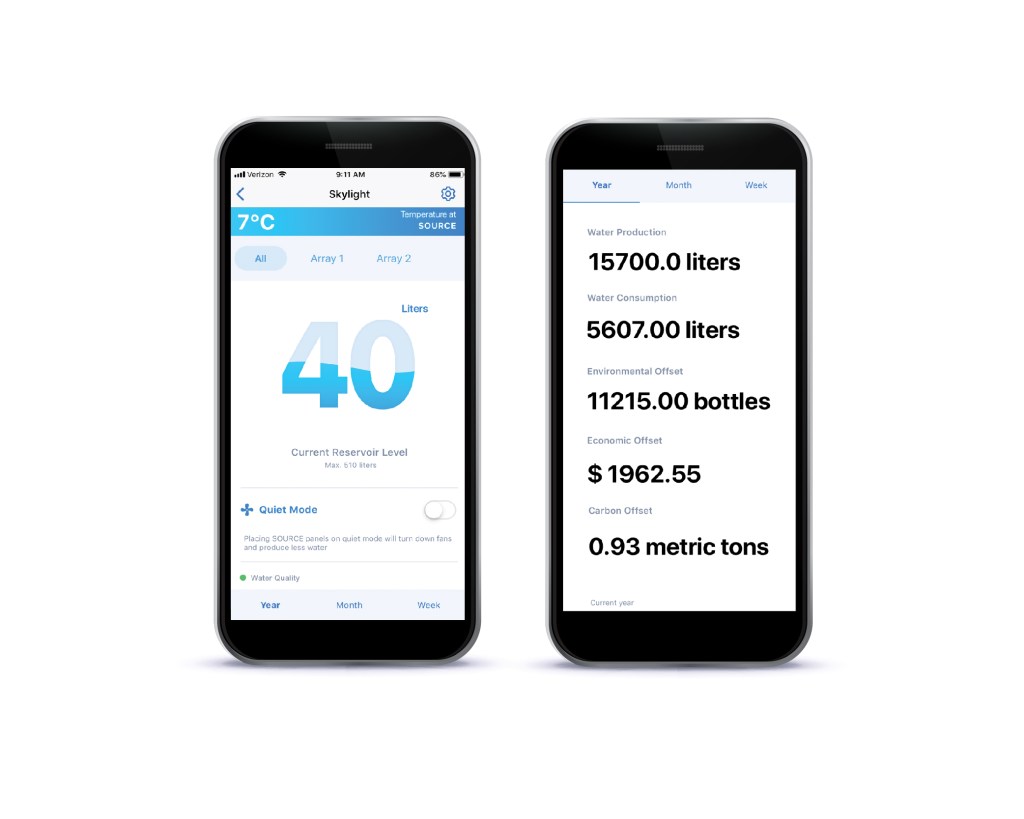 Above: The app for Zero Mass Water’s Source Informed sensor.

VentureBeat: How did you turn the technology into a business?

Friesen: When you amortize the cost of the panel, we’re talking about–there’s basically no operating expense. No electricity, almost nothing to replace. It’s within a rounding error of zero. On the capex side, amortized, you’re looking at one-tenth the cost of medium- or low-grade bottled water. That’s if you’re just buying panels outright online, not even doing scaled projects. It just pays. It’s a switch and save situation.

Even when we do water as a service, that kind of financing, we’re still able to allow people to have the equivalent of home office delivery, the big jugs, at one-third the cost, without the backache. And you know where the water came from. It came from right here.

When you go into the value side, you go from something that is not transparent to this. This is my house here. It’s 17 degrees Celsius right now. I have 110 liters in storage. That’s 220 bottles like these. I know that water is optimized. The sterilization is occurring. I have the mineralization I’d want. If I was going to go out and read a book I could turn off the fans with this. This tells me about my savings this year. I’ve already saved $10 this year against other sources of water.

It’s a different experience. The cool thing is, when my kids go to fill their water bottles for school–when you fill that glass or that bottle, you’re holding the result of that renewable energy. If you have solar PV on your roof, you don’t notice a real difference when the lights come on. It’s disconnected. In this case, you can feel that you did something. When you drink it, especially in the desert–this came out of the desert air.

VentureBeat: Why did you call it Zero Mass Water?

Friesen: That’s a cultural reference. The idea is that if we retain our focus on the problem statement level–this goes back to 2004 and my research group thinking about how you build cultures that enable you to solve big problems. So much of academia, so much of the startup world, is focused on a solution. Look at my widget! If you get folks on the widget, you may be solving a very ill-defined problem.

My thesis, going back 15 years now, was that if you had people focus on the problem statement level, eventually the solution would follow. We worked on the problem statement for this company for a couple of years. We continued to hone what we were trying to solve. We went through, I’d say, tens of major directions, and probably hundreds of minor concepts, before we landed on what we arrived at.

We got to a time where I decided to found this company, and it was, “Let’s stick our necks out a bit and name the company after culture.” As you know, culture eats strategy for lunch. I want everyone in this company to think about culture first. We have seven cultural elements, and that’s something almost anybody in the company could recite. Lead with love. Think zero mass. Build aggressively for divergence. Demand yes-if, reject no-because.

That last one is about–“Hey, I’ve got this great idea!” “No, because that breaks the laws of physics.” Instead you say, “Yes, if it didn’t break the laws of physics.” Now we’re on the whiteboard thinking about the nugget of the idea that I was thinking of. That goes to supply chain and everything else, that element.

Elements around–how do we retain focus within the organization? We don’t have any meetings, company-wide, from 10AM to 3PM. That’s focus time. No interruptions. I wouldn’t go up to someone in the middle of the day and say, “Hey, what are you working on?” They’re in creative mode and suddenly their concentration is broken. We know from literature that it takes about 45 minutes to get back to a state of flow after you’ve been interrupted.

Thinking about culture, thinking about things at the problem statement level, enables us to go and solve, I think, one of the grandest problems facing humanity. 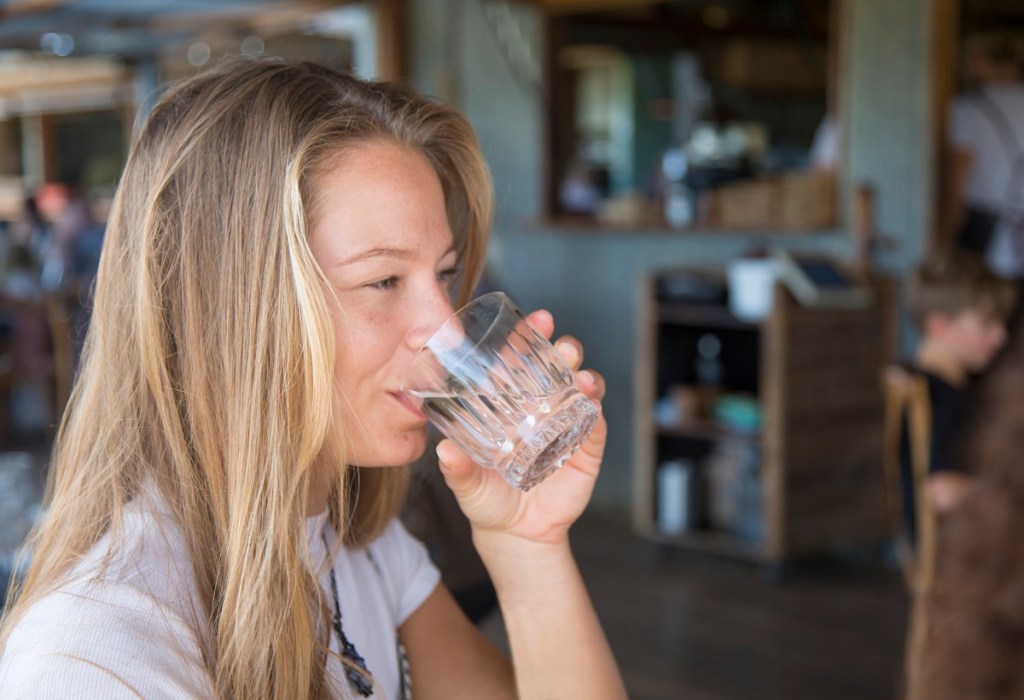 VentureBeat: Is this on some level a charitable thing, or is it a great business opportunity?

Friesen: Both of those can exist at the same time. I’d argue that the best kind of business is one–I’m a big fan of John Mackey’s conscious capitalism movement. It’s this concept that, in fact, you can be a capitalist and think about how you do fundamental good.

Zero Mass, that comes out in a few ways. The product itself is a fundamental good. Trolls on the internet saying bad things about us, it doesn’t even enter our realm of existence. The fundamental good ends up being about people. A part of our profits goes to donating to the bottom billion. Anybody who wants to donate panels to a good cause, we’ll do that at cost.

For example, back in June, I got to know the founder of an organization called the Samburu Girls Foundation in Kenya. You go north of Nairobi, there’s the Maasai Mara, and then north of that is another valley region called Samburu. In that region they perform FGM on girls, child marriage, and other things. I spoke to her in April and she told me that she’s rescued more than a thousand girls. There are 300 girls there at any given time. They come in and get a high school education, often they go off to college, and so on. They gain equity and agency in life, where before they were property. And yet every day they have to leave the compound and walk two miles to get to the river and collect water. There’s a danger of cholera and other things.

On that call I said, “Don’t even think about it. We’ll come in.” Took a deep breath and thought about what we were going to do. In June we ended up sending 40 panels and installing an array that means those girls don’t have to walk for their drinking water. We’re at the very beginning of what we’re building. But that doesn’t mean we can’t serve those that need us most, all the way up to those that want us most.

Guys in the Berkeley Hills that have lots of money and want an off-grid solution, or someone in hurricane alley–when Florence went through we had panels at homes in South Carolina. We have data. They’re making water. Hurricane Florence hits, no water. Next day, making water again. And we can see the family pumped water all the way through. They had an uninterruptible water supply, just like a UPS for power.

This is one of those companies–as the founder I just pinch myself, that I get to be along for this ride. It’s way better than I thought it would be. Tomorrow morning we’ll have an event here where the mayor of Flint, Dr. Karen Weaver, will be here, and Lupe Fiasco, Grammy Award-winning artist. They’ll be talking about a new partnership we’re forming with the city of Flint to solve that challenge. That’s been something we’ve spent a lot of time on doing right. How many people have said, “We’re helping Flint!” and just flung something out into the ether? Yet we still have the challenge.

From my perspective, the technology is two percent. The other 98 percent is the human part. How do we bring people along? How do we build community? How do we engage the right people so we’re doing good? You asked about how to turn this into a good business. I think that’s ultimately what it’s about. As a technologist, you realize that you’re a miniscule part of a solution.

VentureBeat: Are you thinking about how to deploy these things at a large scale? How long might something like Flint take?

Friesen: We have no limitations in manufacturing capacity. It’s always limitations on either logistics or capital. As long as you can keep it in one of those two buckets, we can find our way. We’re able to do panels anywhere from two at a time to thousands at a time. You go from “residential solar,” a couple of panels, all the way up to utility-scale solar where you’re talking about thousands of panels. That full range allows you to do the amount of water that would be prescribed for a household, up to schools and industrial locations and much larger things.