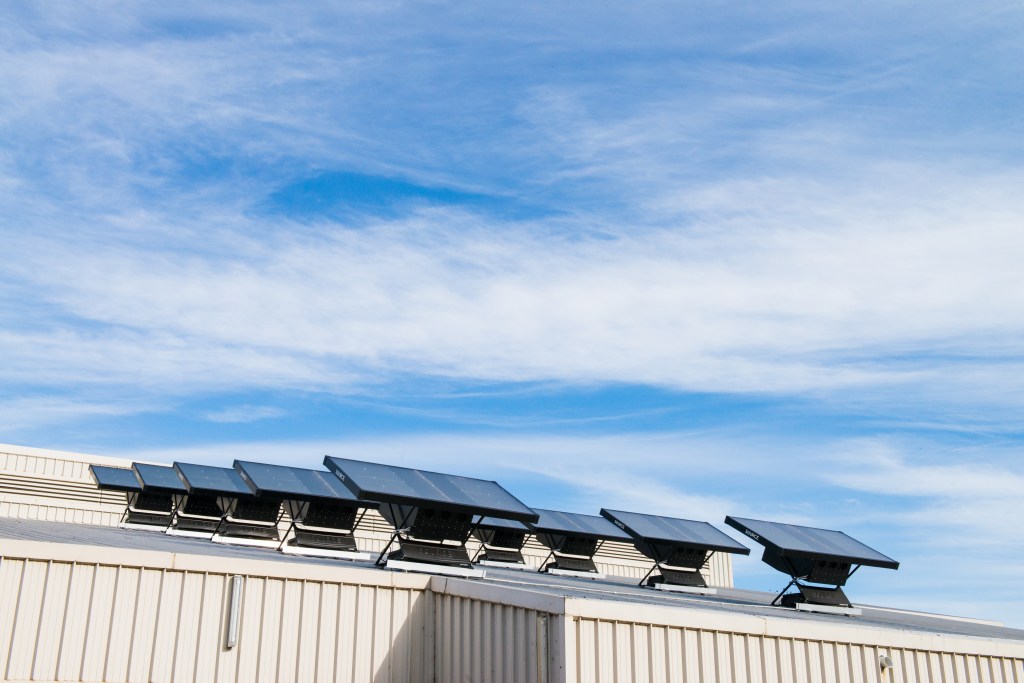 Above: Water panels at Muswellbrook in Australia.

VentureBeat: Do you have any competitors, or is it just you?

Friesen: There have been atmospheric water generators forever. At any given time there are about 10 companies out there where you plug in and they have a refrigerator that chills the air and creates condensation. When you see water dripping off your air conditioner, congratulations, that’s making water from air. That’s an important contributor to everyone thinking about how we fix water, but what we wanted to think about is, how do we do this in a way that works everywhere, for every person? There are no competitors directly from that perspective.

About a year ago a combined MIT and Berkeley team, Evelyn Wang at MIT and Omar Yaghi at Berkeley, developed some materials, metal-organic frameworks, that they claim will take water out of the air down to 20 percent relative humidity. They claim that’s the lowest relative humidity that anybody’s been able to do. Meanwhile, we’ve been in the field for several years already at much lower relative humidity producing water with our material.

What I love about those guys getting involved is it obviously drives a lot of interest from the media and so on. They’re smart people. They’ll continue to advance, and hopefully we’ll be looking at some of the same things over time. Materials is a part of this. It’s not the whole thing. So no competitors directly, but lots of people thinking about water, which is good.

VentureBeat: It reminds me of the novel Dune.

Friesen: We also hear about Tatooine a lot, especially from my 11-year-old son. [laughs] It’s interesting, because some of the best ideas are not new ideas. They’re just re-framing the problem statement. The data say there’s 10^17 kilograms of water vapor in the troposphere, which is more water than all the rivers on the planet. There’s lots of water vapor there, more than we could ever consume. It cycles through the atmosphere every six days.

That resource is there, and then we have this great big ball of fire in the sky that’s another big resource. If we could bring those two things together in a way that produces good water, that should enable us to do the things we’ve done in solar. Now we can make electricity for cheaper than coal. If you said that 10 years ago, people would have laughed. Maybe even five years ago, or today in some places. But it’s true. There’s an absolute opportunity for Source Hydropanels to produce water at a cost structure in the long term that’s below any other potable water supply.

VentureBeat: Are we talking about possibly making the deserts green?

Friesen: I hope, from a water consumption perspective, that’s true. I hope not from an ecological perspective. I hope we’d be smarter about what we do with that water. For example, in the American west–Jefferson said that east of the Mississippi is fundamentally wet, west of the Mississippi is fundamentally dry. What happened when people moved west is we all settled in the drainages, where the rivers are, and pushed animals out. All across the western United States, wildlife managers put in what they call water tanks, holes in the ground that fill up with rainwater, so animals could drink from that. You’ve seen the end result in L.A., where the cougars and bears come into town because there’s nothing to drink.

One thing we’ve done as another way of showing the paradigm, we’ve installed an array in the middle of the desert that feeds a catchment at midnight every night, and there’s a game camera looking at the bobcats and mountain lions and deer, all these animals coming to drink in the middle of night. Here’s this puddle of water that just arrives, like an artesian spring. If you want to think about the full-on paradigm shift — cut all the wires, get away from the buildings, light out for the middle of nowhere with nothing but Saguaro cactus around — you can have water in that place.

I can show you a video. The panels are sitting right here. You can see the leg of one of them here. I’ve buried the line under here, and it’s pumped up to the catchment. This bobcat comes by with a mouse in its mouth. She walks up, and for whatever reason, she drops the mouse into the water. Then she sees her shadow or reflection. All this crazy stuff happens at this water hole. This badger here came once, and then never came back for about six months. Then it started coming every night. Just to give you a sense of scale, that rock is a foot in diameter. This badger is about that big, and they’re not nice animals.

Again, we built that array to continue to evidence what it is we’re talking about. We recognize–you came on and asked, “Don’t people just not believe you?” We have to keep layering it in. We’re showing video evidence of people drinking. We’re having people talk about us who aren’t us, whether it’s the people in Samburu, or the Asian Development Bank that funded the Vanuatu schools. They did their own video production on that project. Ayala Hotels in Manila. The list goes on. If those people are talking about our work, then it’s not us claiming anything. It’s the people that are using it. 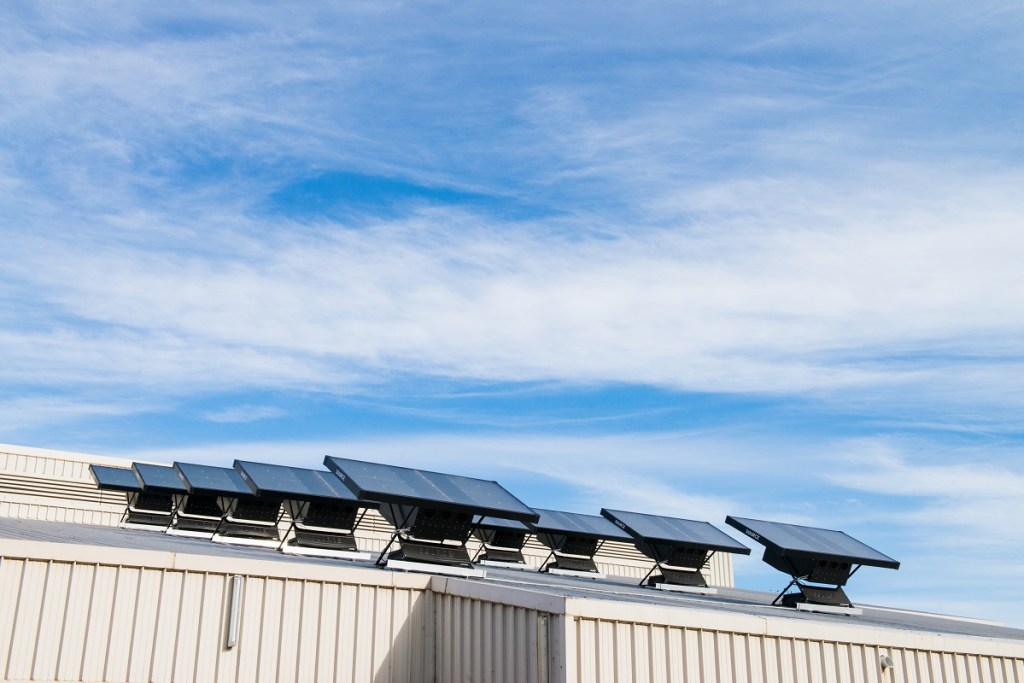 Above: Water panels at Muswellbrook, Australia.

VentureBeat: This ability to sense the quality of the water, has that helped accelerate the process?

Friesen: One of the things that’s important to us is that–we’ll never talk about the future as a company. As a rule we only talk about the present, because that’s the future for everyone else. The main reason for that is, we have to build credibility with something that’s so new, such a new paradigm. You can talk about crazy things all day long, but that’s not a business. It’s certainly not a paradigm shift.

How do we think about building in systems that continue to evidence what it is we’re saying we do? And not just evidence at large, but also to you, when you see these panels. “Oh, I know what this. I know what this water is. I know it’s what you’ve told me it is.”

Friesen: [laughs] My answer is super platitudinous, but it’s also honest. I think of this as building a multi-generational business. This is something that should be enduring. All of our decisions are made on that basis. We’re not trying to build a flash in the pan.

I consider myself infinitely wealthy, meaning that even if you moved the decimal point over several notches, nothing about my life would change. I’m not gonna go buy a jet. I have plenty of stuff. If that’s true, then what we’re building is really about changing the world. That’s how I fulfill my need to do something. I think of this business as perfecting water. Every year we’ll keep elevating the bar of what perfecting water is.

Since 2007, Apple keeps coming out with a new iPhone, and at least up until recently they’ve continually redefined what the ideal smartphone is. If we can do that same thing in water, where we keep elevating the bar every year, we’ll not only continue to squash out the crisis around water–one person dies from a waterborne illness every 10 seconds. Women and girls in Africa alone spend 40 billion hours a year fetching water. Half of all hospital beds in the world are occupied by waterborne illness. 750 water main breaks a day in the U.S. The list goes on and on. There are 11 Flints at any given time. How do we finally go from the Roman era to the equivalent of the smartphone for water? Winning, for us, is getting to that place.

We recognize that the only way we’ll come within shooting distance of that goal is with phenomenal partners, with ecosystem-building, with the force multipliers that are other people. Those who need the solution or those that want to help continue to enhance the solution. We’re thinking about this as building a bigger tent, not as trying to be the only one that does something. Being the one that does something is a very lonely thing to do.