One of the big reveals at the Electronic Entertainment Expo (E3), the big game trade show in Los Angeles, was the unveiling of gameplay for Square Enix’s The Avengers game.

The timing for this game (coming soon) is good because the film Avengers: Endgame has made about $2.7 billion at the box office so far this year. It is behind only Avatar (which made about $2.8 billion in 2009) in worldwide box office receipts.

Square Enix, the big Japan-based maker of the Final Fantasy and Lara Croft games, entrusted The Avengers to Crystal Dynamics, which made the Lara Croft reboot trilogy.

At E3, I saw a demo of the combat, where Hulk was jumping around a crumbling Golden Gate Bridge and was ripping out chunks of asphalt to throw at enemies. I also saw a trailer that showed The Avengers falling apart after their peak and having to reassemble five years later.

I talked with Square Enix’s Vincent Napoli, lead combat designer and Shaun Escayg, director, for the Avengers game. The game comes out May 15, 2020, and it will have solo or in co-op modes on PC, PlayStation 4, Xbox One, and Stadia. 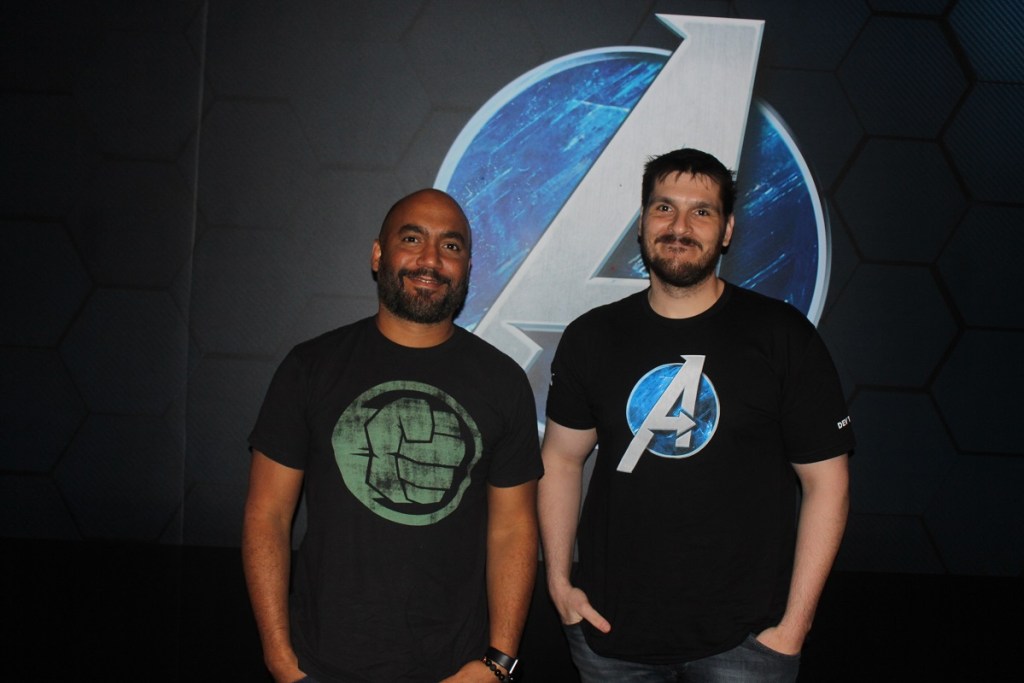 GamesBeat: What were you trying to achieve here? What should we notice about the combat?

Vincent Napoli: The goals were really character-driven, first and foremost. We want you to be these characters. They’re so iconic. They almost demand their own games themselves. We looked at each character and thought, “We’re going to build the mechanics that are true to the characters that we want to see, and then start developing the larger combat system around them.”

Hulk is a class by himself. He’s the class of Hulk, and we built around that. He’s all about weaponizing the world. He can weaponize enemies, weaponize the environment. There’s a lot of depth in the abilities that you can unlock as you start to weaponize one enemy, two enemies, what you can do with them, the types of environments you grab.

GamesBeat: You have to make the world a lot more destructible.

Shaun Escayg: Yeah, that’s another thing that we’re going try to double down on.

Napoli: You can see here that based on the different types of environments, he can grab different objects. You don’t see it here, but he has a full navigation set with that object. He can run around with it. He has different attacks, an entire suite of attacks and abilities with that object. He has the same thing with a single enemy or with two enemies. No other character plays anything like that. That’s very unique to him. 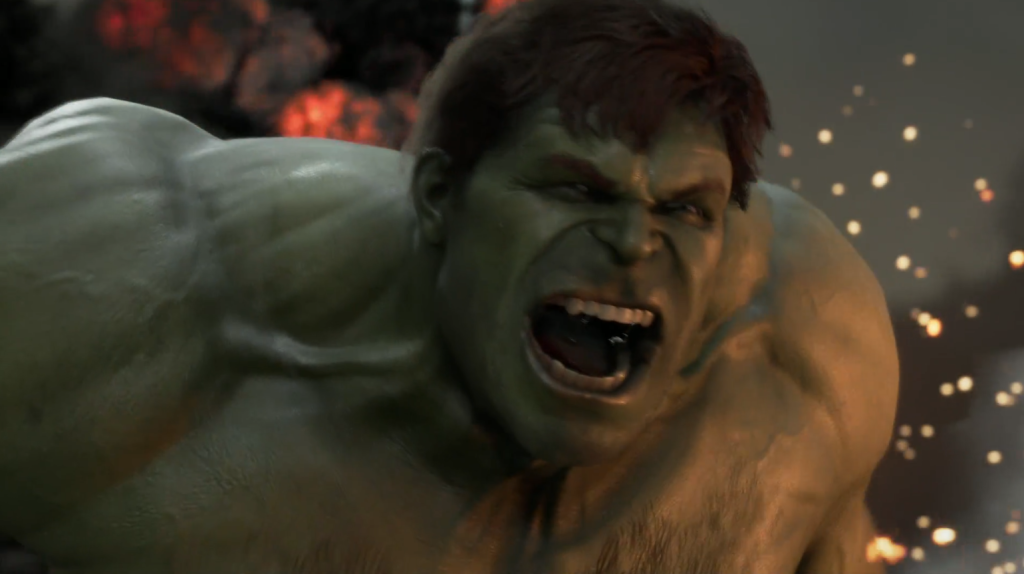 GamesBeat: He looks pretty invulnerable. Do you have to balance that somehow?

GamesBeat: You don’t want him to calm down.

GamesBeat: How does that compare to the other characters?

Napoli: Black Widow is sort of the opposite end of the spectrum. She’s stealthy. She’s quick. Her attacks and combos are very fast. They’re about setting up enemies. We have a pretty massive reaction system. She has spin attacks that deal critical damage when enemies are exposed. She has attacks that set enemies up in order to essentially backstab them.

She also has innate stealth abilities that no one else has, but she can attribute that to the rest of the team. She has support abilities. She can stealth the entire team that she’s with, and in stealth she’s able to do special critical strikes on enemies, finishers and things like that. 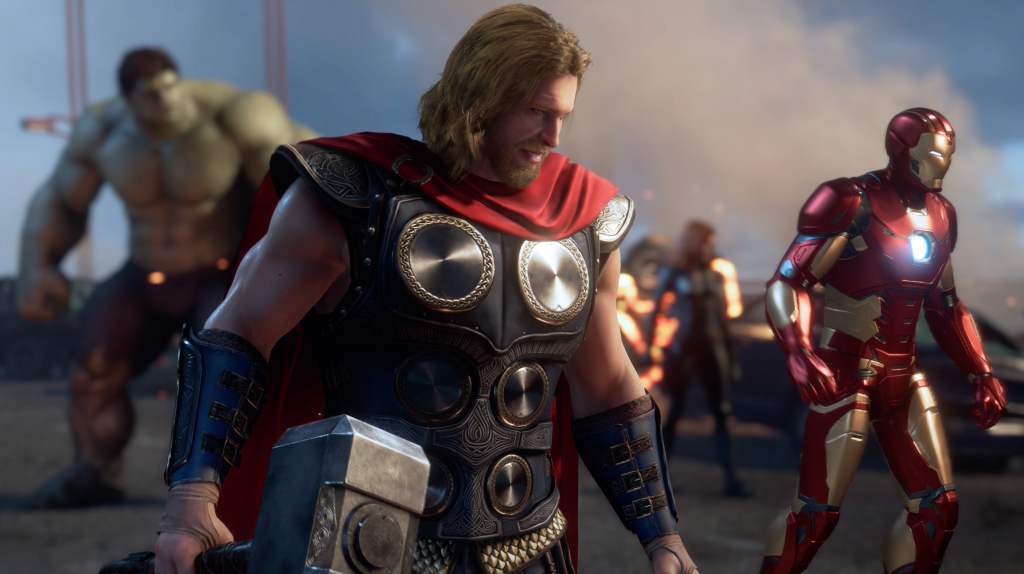 Above: The story involves the five core Avengers members.

GamesBeat: What can you say about Thor?

Napoli: Thor is our hybrid damage dealer. He can deal damage at range or in melee, depending your play style and our gear and skill system, what you spec into. You can delve into which ones you want. He can channel his Odin Force to amplify all of his attacks or amplify his defense. He can quickly counter enemies that are behind him. You can channel those lightning strikes you saw early on.

GamesBeat: Is this all consistent with things like the Marvel mobile games, as far as the powers the characters have?

I’ve played a bunch of the mobile games. We’re fans of all the Marvel stuff. I’d say this is a premier quality action brawler. We’re trying to deliver a top-tier gameplay experience, a cooperative experience, that isn’t — aside from the characters, I wouldn’t say there’s a ton of similarity with the mobile stuff.

Escayg: It’s also wrapped in a strong narrative, a conversation about whether these superheroes are really heroes, or just powerful, destructive beings. It’s a heavily narrative-driven story and gameplay experience.

GamesBeat: Do we see these characters much in a civilian mode, or primarily as heroes?

Escayg: The game starts out with the characters at their peak. They’re at the west coast Avengers headquarters and they’re expanding their reach. They’ve merged with SHIELD. You’re going to see them at the top of their game, and of course Taskmaster and his mercs try to steal this technology and take them down. When the disaster happens, it levels the city, and now the Avengers are leaderless, as well as guilt-stricken. We’re going to journey to reassemble the Avengers and see whether they can persevere.

GamesBeat: One of the interesting things about the movies is that they tend to show them so much in non-superhero form. Do you guys do that too?

Escayg: A lot of the story is about the human element of these heroes. How do they deal with guilt? How do they deal with loss? Can they put their differences aside? Bruce Banner is one of my favorite characters because he’s always in conflict with who he is. He’s a scientist, very intelligent, and very docile in a way. Then all of a sudden he has this part of himself that’s enraged, that can destroy anything with a flick of his hand. Is he dangerous? Is he really a hero? He’s battled that his whole life.

Then you have someone like Iron Man who’s also very smart, very dependent on technology, very much about saving and protecting the world using technology, but he’s also very arrogant. He takes chances where other Avengers won’t. There’s conflict because of that.

Napoli: There’s a trailer moment you might have seen with Iron Man and Bruce five years later, going into what’s changed with them. That gets into one my favorite things we’ve done with the story, Iron Man and where he’s at and where he goes. It’s definitely going to explore them in those more vulnerable states. This is not the only way you’re going to see them. That’s part of what’s cool about doing this kind of branching crazy story.

Escayg: It’s all about the conflict, right? What happened on A-Day? Who was at fault? Widow was in charge of the bridge. Did she fail? Should we have gone back and helped Cap? These are the human things that we wrestle with as well, and that’s what grounds this and makes this different from any other Avengers story.

Napoli: Picking up five years later, where they’re at is very different from where they are in the beginning, which also gives us a very different — it’s not just costumes and aesthetics, but different personalities, different gameplay space.

Escayg: Also, it affects some of our heroes in other ways. I can’t give away details, but they’re affected by their mental state.

Napoli: On the gameplay side we’re not only trying to deliver a satisfying third-person action brawler. We’re doing it for four players. We want to make you feel like a superhero when you play through the game by yourself, but we’re also — because of the world and the story, we can create challenges that make you want to play your characters, progress, and customize the way you play. We have a robust progression system and skill tree. We have the challenges and goals that drive you to play for those. 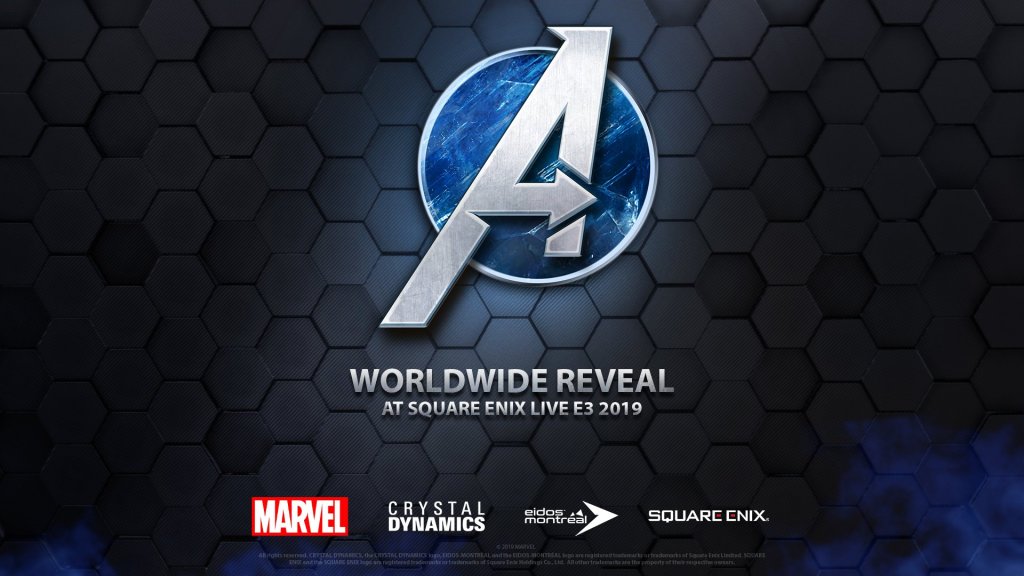 Like I say, I play all the mobile games, and I’m a huge fan of progressing these characters and living in that world. That’s what drove me to this project. They said, “Hey, we’re not just going to make Marvel world that you can visit. We’re going to make one you can live in, where you can be these characters and have it keep going. There’s a reason to keep playing them and leveling them up. It’s a game I want to play. It’s not just something I’m working on.

Escayg: To that point, it’s about living out and participating and playing my favorite hero. You feel the power of Hulk, the power of Thor, the skill and the evasiveness of Widow. Throwing that shield and living out the superhero fantasy. And not just watching it, but partaking in it, in the emotional roller-coaster of the conflict. Are we heroes? Are we just dangerous, without really knowing that?