Microsoft has a lot riding on Halo Wars 2, a real-time strategy exclusive that debuts on the Xbox One and Windows on February 21. The game has been in the works for a couple of years at the Creative Assembly, the United Kingdom studio behind the Total War series.

Creative Assembly’s job is to break the curse of real-time strategy games on consoles. It turns out that it’s far easier to play such games with a keyboard and mouse, rather than a game controller. To make the game more accessible on consoles, the developer simplified the gameplay and focused on big moments when you can bring in the special abilities of your Spartans and other forces to turn the tide of battle.

I played a single player mission of Halo Wars 2, and then I played a few rounds of 2 vs 2 multiplayer and Blitz mode. Then I spoke with David Nicholson, executive producer for the game at Creative Assembly.

Here’s an edited transcript of our interview. (And here’s our stories on Halo Wars 2 multiplayer and Blitz mode). 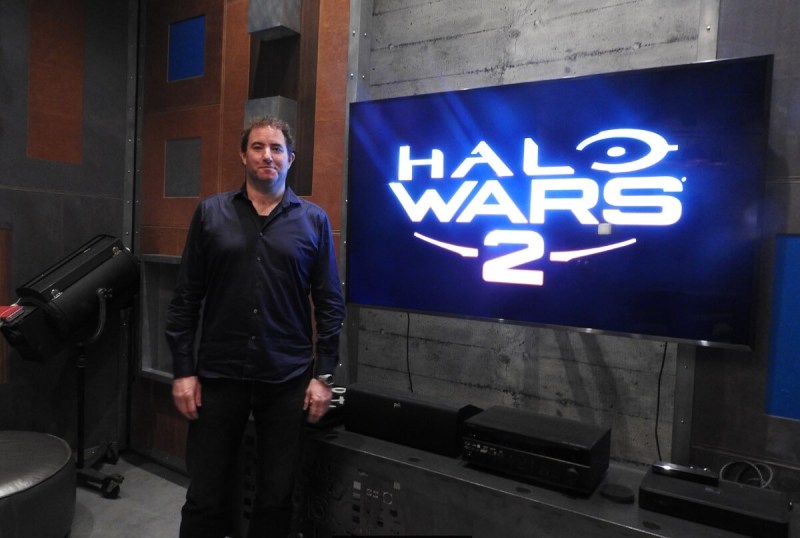 GB: How long have you been working on Halo Wars 2?

GB: It seems like a difficult job, trying to do this on a console. How did you think around that?

Nicholson: We had a very strong original title to start from. Ensemble did a great job with the original Halo Wars. We broke that down and built on what was successful about it. Then we added a great range of things.

The difficulty, the challenge comes from trying to build the RTS for everyone. There are people who love RTS and don’t play everything else. We’re trying to understand what they’re looking for and how we can satisfy those guys. But there are also people who’ve bounced off RTS in the past, who have not found it appealing. How can we make it more readily accessible, more understandable, but also get them exposure to the depth of an RTS that keeps you playing it?

GB: There’s always the crowd that enjoys the genre on PC, but has a hard time on consoles.

Nicholson: There have been some valiant, but maybe less successful attempts at doing RTS on a console. But the original Halo Wars is arguably the very best implementation of RTS controls on a console. We think it’s boiling down the things people want to do – what do you do with your units, how do you control them – and getting that as intuitive and accessible as possible with a limited number of button combinations.

We’ve done that with things like control loops. The original title had all units and local units, which we’ve maintained. But we’ve added the ability to have control loops on the console through using the D-pad. You can have up to four control loops at a time and easily switch to them, easily add or take units out of those control loops. That’s one thing we’re pushing forward. 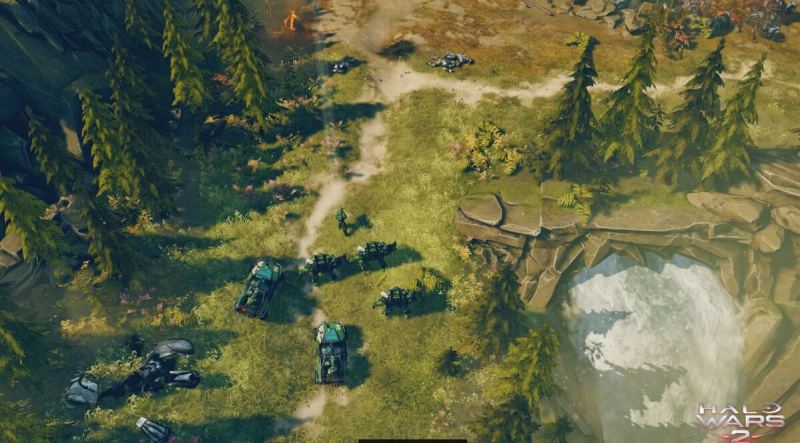 Above: Halo Wars 2 single-player mission Ascension teaches you how to move through a map.

GB: Does the tutorial take people through how to get used to that?

Nicholson: Right. We have a stand-alone tutorial. The pure purpose of that is as a training ground, teaching you how to do a variety of things like base-building, leader powers, unit selection, attacks, and counters. But also, if you decide you don’t want to play the tutorial, the early stages of the campaign are also onboarding mechanics and features and approaches for you.

GB: Are you reducing the number of units on the screen, relative to most RTS games?

Nicholson: I think we have a pretty high pop cap. We have a good number of units on screen at any time. Our camera is probably slightly closer in as well, though, because we want you to feel more involved in the battle. We want you to feel compelled to protect and care for and have some compassion for the units you deploy out there. You’re looking after them. Bringing the camera in lets you focus and get more connected to those units. Doing that with a smaller number of units is part of the approach.

GB: What’s a quick way to go between locations on the map?

Nicholson: Again, it’s on the D-pad. It’s not necessarily a move between different groups, though. In the controller options, you can set up what you want the D-pad’s default actions to be. It can either be map movement, and then control loops are a combination of the right trigger and the D-pad, or you can switch that around. Then control loops are the default, and squeezing the trigger combined with the D-pad will cycle through your bases, cycle through your armies, or jump you back to the last alert.

GB: That’s one thing I hadn’t mastered yet. Moving from one part of the mini-map to another was pretty slow.

Nicholson: Yeah. If you squeeze the left bumper, then you can accelerate across the map. The more you play, the more you use these functions, the more you ingrain that memory so that you’re more used to it. 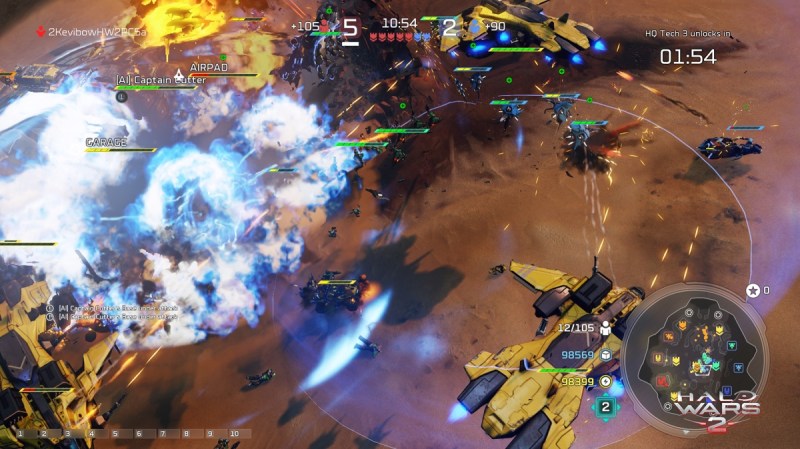 Above: Halo Wars 2 has furious action.

GB: Playing without trying to memorize these things—what level of functionality can you get without mastering these kinds of controls?

Nicholson: We’ve certainly seen people playing Blitz with zero instruction. We didn’t have tutorials for Blitz for a long time during development. Throwing people in to play it, they soon got up to speed with how it worked. As you progress into the slightly more complex modes with multiple different options in them, then players tend to discover. That’s one of the things we tried to do with the controls. Where do you fingers fall? What are you going to try when you want to do something? “I’ve not read a manual, but I’m going to try this.”

GB: When I figured out the leader trigger, what to do there, that made the battles a lot more fun.

Nicholson: Right. The leader powers are a big thing, when you can bring them out on the field.

GB: Was that always there, or did that come into the design at a later point in the process?

Nicholson: As part of the open beta we had in June, there was a lot of player feedback that was very positive and constructive about certain things. One thing we changed was the understanding of the leader powers. We had a slightly different implementation of leader powers previously, which would have been more familiar if you’d played an MMO or an RPG. It was more like a talent tree, similar to what you’d see in something like World of Warcraft. But we found that wasn’t as readily understandable to players.

We moved that into the radial menu where it is now, which is more familiar. It’s a very similar interface, similar user experience to other parts of the game. We’ve found that people pick up on that much more quickly. It’s more intuitive to say, “Okay, I want this, and I want to double down on that.” We thought the earlier way was intuitive, but that’s only because it’s intuitive if you’ve played a certain set of other games that do things the same way.

GB: Are you able to have this point of contact, use the leader, and somehow feed more troops into the battle at the same time? Or do you have to break off from the leader to go back to the base and start building more?

Nicholson: In Domination, Strongholds, and Deathmatch you’re always building more units back at the base, but you can move the rally point if you want to. We see the more advanced players constantly moving the rally point. They’ll set a rally point, set some build orders, get the guys moving, and then move them somewhere else. There are some good tactics to employ if you’re familiar with exactly where the rally point needs to be. You can start pumping out units, and then you know they’ll go over and attack straightaway rather than sitting at the base waiting for you to tell them what to do.