The film Avengers: Endgame has made about $2.7 billion at the box office so far this year. It is behind only Avatar (which made about $2.8 billion in 2009) in worldwide box office receipts. And that is why it’s a big deal that Square Enix, maker of the Final Fantasy and Lara Croft games, showed off the upcoming Marvel game, The Avengers, during its Electronic Entertainment Expo (E3) event in Los Angeles.

And that amounts to a lot of pressure for Noah Hughes, creative director of Crystal Dynamics, the Square Enix-owned studio that, along with Eidos Montreal, is making the game for May 15. I spoke with Hughes about the game, including the complaint from Marvel fans that the game won’t use the likenesses of the famous actors who play the Avengers in the films.

You’ll be able to play the game solo or in co-op mode on PC, PlayStation 4, Xbox One, and Stadia. I talked with Hughes at E3 about the game. 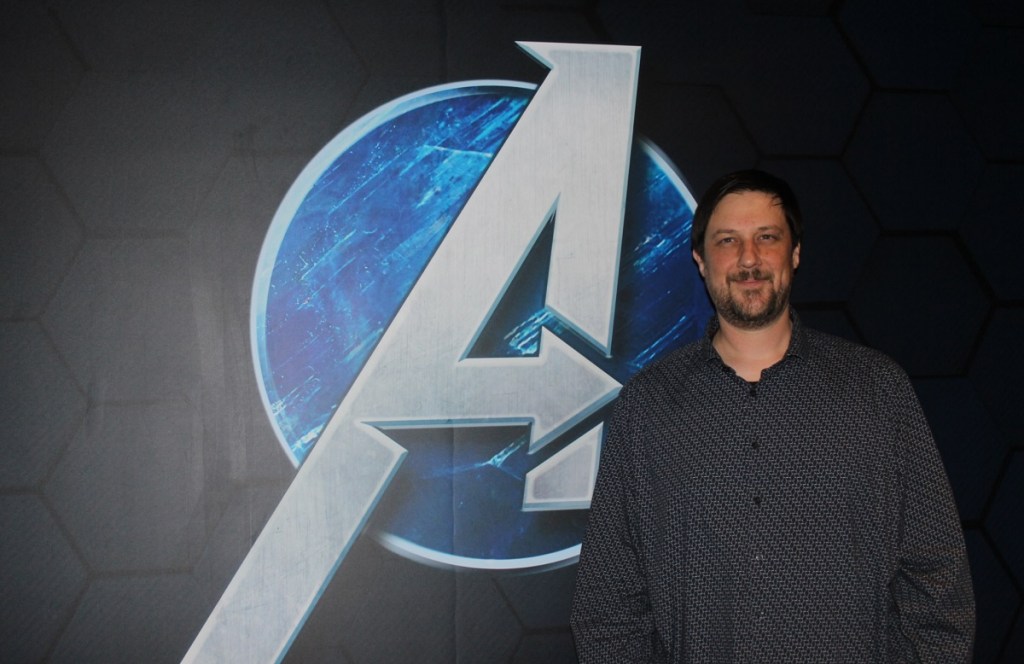 Above: Noah Hughes of Crystal Dynamics.

GamesBeat: How did this all come together for you?

Noah Hughes: It’s an awesome opportunity, to get a chance to work on the Avengers. We’re delivering an action-packed cinematic campaign that tells an original story, and we’re also offering one to four player co-op experiences, so you can assemble with your friends online and really live out those superhero dreams. We’re coming out May 15, 2020, to Xbox One, PlayStation 4, PC, and Stadia.

GamesBeat: Is the Stadia game essentially the same?

Hughes: We have no particular announcements related to Stadia at this point.

GamesBeat: Was the timing good, coming off of Lara Croft? You were ready for this?

Hughes: We were very excited about the opportunity. The studio was definitely ready for it. We had done a lot of enhancements to our proprietary foundation engine at Crystal in order to support the game. We have such a diversity of heroes, from a flying Iron Man to a much richer melee system than we’ve had in the past. Lots of enhancements dedicated to this.

GamesBeat: Which games was that originally used for?

Hughes: It’s the same engine as in Tomb Raider, but we’ve essentially built on top of that foundation. We were able to benefit from a lot of the core functionality that we had, but extend that to the point where we can have such a diversity of heroes.

GamesBeat: What’s more complicated about building a Marvel game like this? I’m sure you have to get approvals for lots of things.

Hughes: Working with Marvel has been a collaborative process. We worked closely with people like Bill Roseman. He worked closely with the Spider-Man game as well. Having someone who’s very familiar with games, but also has a deep understanding of the materials, that makes it fairly effortless. We were able to brainstorm. We’d come up with ideas together. Ultimately they help us make sure that it’s right for the fans and all of that.

Hughes: It was important for us to take players on an original journey. We take inspiration from movies and comic books, and it’s important that these heroes really are the heroes you want them to be, but we also want to take people on a new, fresh journey. There’s that sense that Endgame was great closure, and now we’re excited to offer what’s next for the Avengers.

GamesBeat: Did you learn some things from Insomniac’s take on Spider-Man?

Hughes: As fans, we play all kinds of games. Spider-Man was amazingly well-done. We might have lost some productivity when that game came out. [Laughs] But it was important to us, with this game, to make a game that was right for the Avengers. One of the things that’s unique about the Avengers is it’s a group of superheroes, not just a single one. That inspired a lot of our choices, anywhere from the co-op opportunities that players have in the game to assemble together, and also setting the game on a global scale. We offer players choice in the world, but from your base of operations you really are protecting earth from escalating threats.

GamesBeat: This sounds like a multiyear effort for you.

Hughes: We’re excited to take players through a narrative that happens over multiple years. The game has a whole lot of content at launch. We’re also excited to have new heroes coming, new regions coming. Those will be at no additional cost to players. That’ll help introduce new experiences, but also advance an ongoing story.

Hughes: One of the things that was clear to me when we had the opportunity to do the Avengers is that it didn’t really feel right to tell a single campaign and be done with it. The heroes can each be the star of their own game, and there’s so much story to tell for each hero. Ultimately we have a global threat and a story that has to be resolved there. There’s really no way to look at this as a small experience. That’s the ambition, to deliver on what to me felt appropriate for an Avengers property.

GamesBeat: What was different about working on this compared to the Lara Croft games?

Hughes: It’s been super exciting in the sense that you have superheroes with insane powers. We have empowered traversal. We have heroic combat. The special abilities that each of these heroes has make you feel amazing, whether it’s Hulk’s ability to smash—he can just pick enemies up and wield them as weapons. Or Thor calling down lightning and things like that. It was exciting for us to lean in to this huge sense of super empowerment. 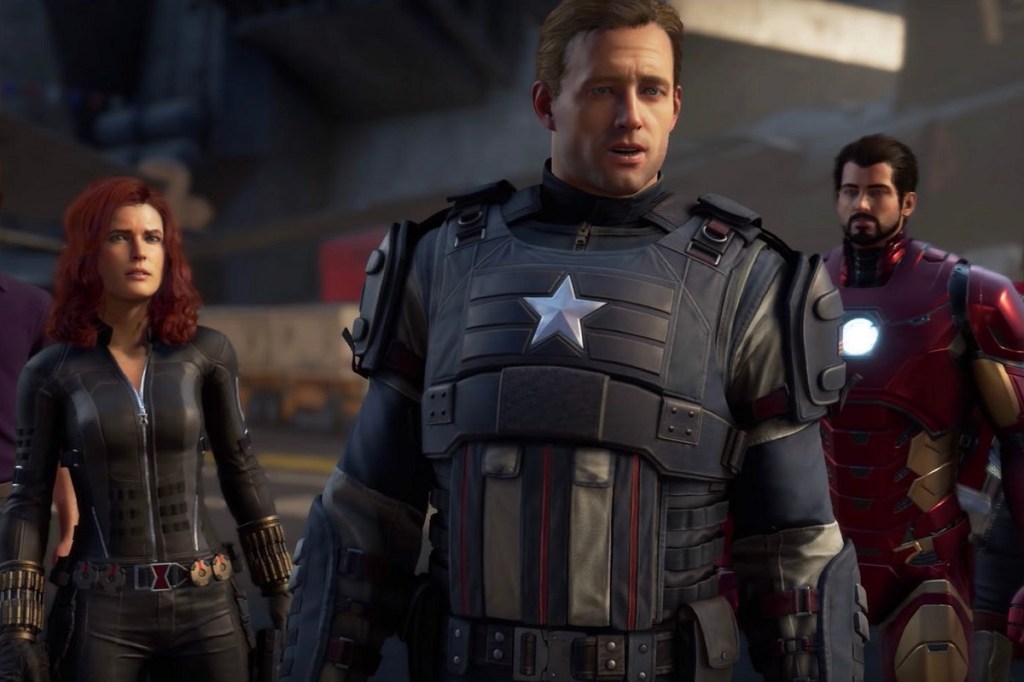 GamesBeat: What kind of settings are you showing here? We saw San Francisco.

Hughes: We have a bit of a destroyed San Francisco. The game opens at the A-Day event. The Avengers are opening a west coast headquarters and showing off a new Helicarrier with some new technology. Things go terribly wrong, and that leads to the Avengers disbanding. We pick up the story five years later, and that journey will take them to many places. You can glimpse a few of them in the demo here. We see Tony in space for a moment. We see a snowy environment with Thor flying through it. We have a great diversity of locations, that sense that it’s not just one area that these Avengers protect. It’s an entire world.

GamesBeat: What’s happening with actors and likenesses and all that? Has anybody been drawn from the movies?

Hughes: The visual designs are inspired by the comic books and all kinds of other sources. We were very excited, though, to bring those characters to life with voice actors like Laura Bailey and Troy Baker and Nolan North. That process was, first and foremost, getting high-quality voice talent, really doing a casting process where we were finding actors who connected with these heroes. One of the things I love seeing about these actors is they understand the heroes very deeply, and then they have fun playing scenes together. They really are coming from the place of that hero. It’s been a great thing to watch.

GamesBeat: How long of an experience are you shooting for?

Hughes: We have a full action-adventure style of campaign. It’s what you might expect from a Crystal Dynamics game, where there’s at least as much content on the sides of the campaign as there is in the main story itself. Then, at the end of the campaign, you’re also put into a situation where you continue to play. You can clear out anything you haven’t done. But you’re also presented with new, larger threats that encourage you to level up those heroes and team up with your friends to take those on. It is a very large experience, but we’re particularly excited that that’s just the beginning. Players can look forward to new things coming down the road as well.