Design. Rarely has a single force so utterly dominated economic enterprise. Design is literally “everything.”

We’re talking about the mobile industry, of course, where trillions of dollars of market value have been created in the past five years. Smartphones, tablets and mobile services are being devoured by consumers — but you’ll notice that beauty is winning.

That’s why we’re focusing our next executive-level event completely on the topic of design: That’s MobileBeat 2012, to be held on July 10-11 in San Francisco. And by design, we mean the wider definition, one that encompasses user interface and experience (UI/UX). Design is determining the winners in everything mobile, including apps, enterprise services, mobile payment providers, and more. 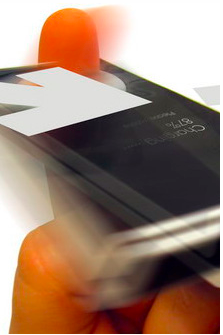 Why? Because mobile is a radical departure from the desktop. You’re on a limited network, you get packet loss, you have a limited screen, and all this necessitates a new and radical degree of discipline. In the desktop era, you could get away with murder, because big screens and keyboards left lots of room for users to figure things out even if the software wasn’t anything to look at. Now companies have to make mobile apps that are more beautiful than even their desktop versions.

Ask yourself what is the most disruptive, dynamic company today, and why? Well, we’d guess your answer is one of two companies.

First, you might say Facebook. Eight years after its founding, Facebook is about to unleash the largest IPO in history, at a predicted valued of $100 billion — an unprecedented creation of wealth in a such short period of time. Facebook did so largely by dint of design. Facebook overtook MySpace, Friendster, and all other social networks that came before it because founder Mark Zuckerberg realized that rules, order, and structure of the Facebook page trumped the chaos of limitless self-expression. Now Facebook is still struggling with how exactly to deliver its mobile experience across various platforms. But one thing is undisputed: Over the past three years, Facebook’s mobile app has consistently ranked as one of the most popular mobile apps, if not the most popular. Why? Well, the company focused on elegance, so much so that it decided to sacrifice advertising in favor of a better user experience.

Second, you might argue Apple. Apple has become the most valuable company in the world (it’s now worth $544 billion), because it has unleashed beautiful mobile products — the iPod, iPhone and iPad — that boasted user experiences second to none. The company’s focus on design simplicity, seamless software and hardware integration, amazing screens, and intuitive touch technology put Apple so far ahead of the game no one has been able to touch it.

Design is the mobile trump card.

Mark Curtis, founder of a top service design consultancy Fjord, recently argued this well. The emergence of tablets has led to bewildering complexity for publishers and providers of mobile services. You’ve got to serve four different devices, from smartphones, to smart TVs, tablets and PCs. But that requires designing varied experiences for each device, for example allowing for sliding and touching in one format, use of a mouse for another, voice recognition in another, and so on. Just who within your organization will ensure a quality experience is kept consistent across all these formats? The chief design officer, of course, the person who is rising to the top of many company org charts.

At our fifth annual MobileBeat event, we’re assembling the most elite minds we can find to debate how UI/UX is transforming every aspect of the mobile economy. They’ll give pointers to where the biggest opportunities lie, what tricks ensure great design, and what pitfalls to avoid. We’ll have more than 1,000 attendees representing the ecosystem, from OS players, manufacturers, investors, advertisers, big consumer brands, app developers and more.

Check out our MobileBeat 2012 website for more, register for an earlybird price, and find out how design is disrupting six key areas of the mobile economy: tablets, IT & enterprise, infrastructure, monetization, retail, and distribution.

Design is also crucial for entrepreneurs: Ask Kevin Systrom, founder of Instagram, about design. Facebook just forked over $1 billion to buy his company — only 18 months after he’d launched — because Instagram dominated the currency of mobile social sharing: the photo. Instagram did this because it obsessed over design (Instagram’s team once spent two hours perfecting the rounded edges of its app icon).

Everywhere you turn, design is driving the most disruptive trends with the mobile economy.

Apple is facing renewed competition from legacy players who have figured things out, and who are unleashing their own beautiful offerings. Co-founder Steve Wozniak recently praised Microsoft’s new Windows Phone operating system on the Nokia Lumia as a “no contest” better experience than the iOS — a heretical statement for the Apple fanbase. With more Nokia and Microsoft phones flooding the market this year, the real battleground has just been set.

Every serious major player is unleashing new offerings to ensure they stay on top of the mobile experience. Angry Birds became huge because of its focus on elegant interaction on mobile, and upped the ante with its Space game, now the fastest growing mobile game in history. The big carriers, from Verizon and AT&T are in a race to make sure their networks are the fastest — because they know consumers are increasingly making decisions based on surfing experience. Sprint, a distant third in the U.S market, is reacting to boost its own experience, announcing an unlimited data plan for LTE Android smartphones, as well as on the next iPhone, which could amount to huge costs, but the move has already spurred significant new subscriptions. Then there’s the intense rivalry between banks, credit card companies, PayPal, and Square to using design to disrupt mobile shopping (will the dongle be a triangle or square?). And mobile banking services, where offerings have so far yet to go on the experience front.

I could go on. But I think you get it. Come join us at MobileBeat 2012, where we’ll discuss how design — namely UI and UX — is dictating whether your company is a success, or is left in the dust.