SCVNGR offers a platform to help businesses, universities and museums build real-world, location-based games. Some are exactly what the name implies — scavenger hunts with clues from your phone. Cities can use them in tourism campaigns to promote places, while museums can use them to point out works of art. Still others, like jewelers, can use them for promotions. One SCVNGR-based game involves burying a $15,000 diamond ring in the ground and giving it away to the finder. 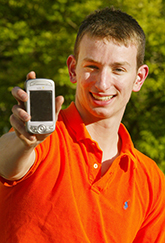 It’s proving to be a rather profitable niche for the Boston-based startup. The company turned cash flow positive in the last half of 2009 and will bring in $1 million in revenues this year, all from being an idea that Priebatsch submitted to a business plan competition his freshman year.

While other companies in the location-based space are duking it out to attract hundreds of thousands of users and achieve the kind of scale that will make an advertising network run successfully, Priebatsch says he’ll use the new funding to focus on SCVNGR’s specialty. “I had a choice to try and get a bajilllion people right away, or create something enterprises would push out to lots of people,” he said. “In the end, I chose to be pragmatic because we didn’t have enough money to go the purely social route. Competing with Gowalla and Foursquare would be akin to us competing with Facebook.”

The round led by Google Ventures, also includes Highland Capital, which invested in the first round. Google Ventures’ Rich Miner takes a seat on the board. Priebatsch is doubling the size of the company from 20 to 40, which he says he can do on a $4 million round size because the company is cash-flow positive. The company will also build out more features that support its game-building community and focus more on selling its service to conferences. It recently partnered with graphics conference SIGGRAPH to help people find sessions that interested them through a game.