GamesBeat: You have these new products out in the meantime, like the flash draft.

We’re trying to give people an opportunity to keep playing. We’re trying to get as close as possible to where people feel like they can always be playing. An example would be, maybe you’re on the west coast and you didn’t get out of bed and get your lineup ready by a 10AM kickoff time. Those people should still be able to play. What flash draft does, it’s a contest that starts and ends with every quarter of a game. Even if you miss the kickoff, or you’re not so happy with your team an hour into the game, you can play again. 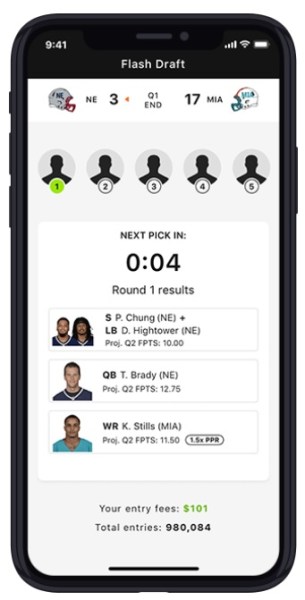 Above: DraftKings lets you play a season in a day.

GamesBeat: And you have this team pick ‘em as well?

Robins: Yeah, that’s something we also launched. We were trying to create something a little more casual, and something that could play on the excitement around the country about the new potential sports betting laws in the coming years. Also, a lot of the feedback we got last year around some of our promotions said, “This is great, but I don’t think I can win.” We wanted to set up something where people felt like they could win.

The way it works, you pick from all the games going on, and if you get at least half of them right in week one, you get a piece of the million-dollar prize pool. I think a lot of people feel like they can pick half of a week’s games right. Then we’ll keep running it in subsequent weeks. There won’t be as big a prize pool — the big one is for week one, the million — but we’ll keep running it with something like $10,000. We’ll see how people like it.

GamesBeat: How do you look at some of the opportunity for betting on esports? Is that a totally different business, or is it similar?

Robins: I’m a big esports fan personally. I think that over the long term–we already have daily fantasy esports, so I don’t think there’s any reason a spectator sport, which esports clearly is, shouldn’t have games that allow you to play fantasy and bet and things like that. It only makes sense. It works that way for all sports.

The challenge for esports is that New Jersey, at least, has chosen to prohibit esports betting as part of their initial sports betting laws. I believe people will want to bet on esports and we’d like to see that allowed at some time in the future. I do worry a little bit that future states will copy what New Jersey did there. It’s just something to keep an eye on that may make it hard to create those kinds of products in a way that’s widely available.

Obviously if it’s allowed we’d like to do it. We think the customers who watch esports — the ones who are of age, of course — I understand the reason they prohibited it in New Jersey was because they felt there’s a heavy skew to younger people that follow esports. But there are also plenty of 21 and over customers who watch esports, and I’m sure some of them would like to bet. In the meantime we’ll continue to have our fantasy offerings for esports. That’ll be a good product for us for many years to come.

GamesBeat: Back to those two products you’re introducing, do you think you’re heading toward a nanosecond-long attention span among players?

Robins: I don’t know that it’s about the attention span. It’s more just on demand, if you will. The way the world is going, people want to be able to consume the products they want, when they want. They want them available at their fingertips on demand, as opposed to at scheduled times. Obviously sports is a little different, but if you look at content consumption, that’s where everything is going. Mobile has increased that trend, because it truly does make anything available to you at any point in time. You have constant access to information, to communication, to social media.

I just think the world is increasingly moving in a direction where everything’s available on demand. The more that products that are content-driven, like ours, adapt to where the world is going, the more they’ll continue to grow and have an audience over time.

GamesBeat: You’ve had to think about this for quite a while, then.

Robins: I always look at where the macro trends are headed, where the world is going. If you can figure that out, which is hard sometimes — we have a vague understanding sometimes, but we don’t really know — but the more you can figure that out, the more you can make sure that what you’re building is going to actually grow and retain customers in the future, and the more you’ll be ahead of the curve. With technology and entertainment, if you’re not two or three years ahead, or maybe more, if you’re not thinking that way all the time, somebody else is and you’re going to miss the next thing.

GamesBeat: We’ve seen a ton of sports spectating happening online as well, live streaming on Twitch and things like that. Do you feel like that relates to your business in some way?

GamesBeat: Does it tempt you to do anything like going into that business, becoming a broadcaster?

Robins: I don’t know if we’ll become a broadcaster. We might do it more through partnerships. But we are absolutely working toward integrating streaming and other types of content into what we offer. We already have a lot of video clips and other sorts of content that we put out every day. We’d like to have streaming for games available directly through the DraftKings platform.

GamesBeat: You’ve found an area that had some hyper-growth to it. Not everybody gets that opportunity. A lot of popular games are out there, but they don’t take off the way daily fantasy has. Did you learn any lessons about dealing with that kind of growth that were valuable to you in hindsight?

Robins: Regardless of what field you’re in, whether you’re a game developer or anyone else, that hyper-growth is always tough to deal with. Probably some of the things I have to say are not specific to this field. But first, make sure you’re keeping a high bar for people. You’re going to need to hire quickly, and you’re going to need to make sure that you get people onboarded, but you can’t let that bar slip. You have to have the best people.

Also, there’s always a balance between wanting to invest in your long term, your technology platform, and the kind of smaller bug fixes that increase the quality of your product. What we’ve found is that trying to only do what’s absolutely critical there, and focusing on getting new games and new features out in the market, that’s what you want to do in the hyper-growth phase. Those are the things that keep the growth up. The other things, when you optimize them later, if it’s on a bigger base, you’ll get more out of them later too. Sometimes companies are too focused on trying to perfect everything early on, instead of capturing 80 percent of the value with 20 percent of the effort and then moving on to the next big opportunity.