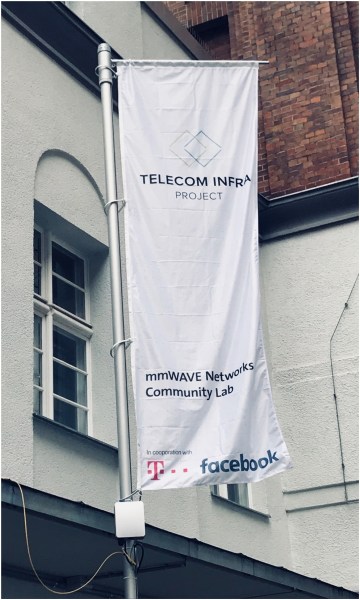 Above: TIP is trying to build millimeter wave networks.

VentureBeat: As far as progress goes, we’re at something like 51 percent of the world’s population with access to the internet now?

Bernstein: I think the latest we’ve discovered in our State of Connectivity report is 3.8 billion people who don’t have internet access, which is down from 4 billion in last year’s report. I believe that’s around 51 percent, yes.

VentureBeat: If you look at the rate of change, what do you notice there? Is it happening too slowly for your goals? Do you feel like it’s happening at a good rate?

Bernstein: We actually want to do everything we possibly can to accelerate the rate of people connecting to the internet. That’s why Facebook is so heavily focused on connectivity. But to your point earlier, part of that is how we can work with operators and other partners who are focused on connecting the unconnected. Simultaneously, there’s the increasing challenge that Axel raises, in more development markets, to ensure that the amount of capacity operators are looking to carry can be handled as efficiently as possible, considering all of the parameters in play.

TIP is simultaneously focused on driving acceleration of connectivity in emerging markets, and also very much focused on helping operators and other partners in even highly developed markets improve the health of their business, so they can continue to invest rigorously in future network builds. The other point Axel makes is also important. This is not about addressing just one point in the network.

From the beginning with TIP, we established three broad tracks, what we call project groups. Those are access, backhaul, and core management. Those three tracks cover the major areas of network components where we feel like there are opportunities to drive innovation, more efficiencies, and approaches like dis-aggregation and enabling new players and new approaches to be brought forward. We feel like that plays an important role in addressing the biggest challenges that operators are facing going forward, in emerging markets as well as developed markets.

VentureBeat: This is not exactly your territory in technology, but what do you think has to happen on the social side to help accelerate adoption? There are some obvious things in some areas, like electrification, basic quality of life improvements. Is there coordination you can participate in to help this happen faster?

Bernstein: Absolutely. We also have efforts and projects with groups like Power and Connectivity, a subgroup that’s working on how to figure out making these solutions better able to perform in areas where there’s low power, or where the infrastructure may not be as stable. There are aspects of many of the project groups where the technology can account for some of those different and varying conditions.

Clauberg: There’s one key social aspect inside of TIP, and that’s the collaboration we’ve initiated here among the various players in the industry. We have members that are more traditional vendors in the space. We have startups. We have systems integrators. We have the telcos themselves. We have formed a community with people driving the internet, like Facebook for example. That’s a new way of working together in this industry, compared to the old way of innovating inside the vendor or inside the telco. It’s important to accelerate the pace of innovation.

VentureBeat: If these are some more near-term things to worry about or fix on the technology side, what are the long-term things that have to happen? With things like 5G, some people are quite concerned that the bandwidth will just be taken up by developed countries. The improvement you get in bandwidth from 5G could cause more behavior that pushes up demand for that bandwidth. 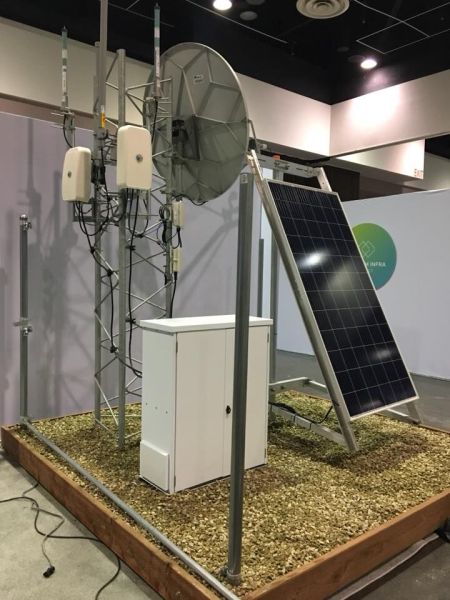 Clauberg: I agree that the demand of bandwidth will increase with the applications that become available. During my career, before I joined Deutsche Telekom seven years ago, I was working at Cisco, where I was sales CTO for the emerging markets theater. You have to keep in mind that this technology introduction is a chance for emerging countries to leapfrog and actually pass a lot of developed countries as part of that development. It’s an interesting phenomenon in the market.

With 5G, it’s not just sheer bandwidth. We should keep that in mind. Bandwidth is one part of 5G, but also, when we look at the ability to slice the network, and on one side offer a broadband slice while on the other side you offer a slice with ultra-low latency — for example, you’d use that to support autonomous driving. On yet another side you can offer a slice for a massive number of IOT devices with rather low bandwidth per device. That’s one of the key innovations coming to the table with 5G.

It’s also a great example where you need new ways of running the network and automating the network. If you extend that concept and bring in more and more slices, you have to do that automatically, because just doing manual management like you do today won’t scale. That’s one of the focus areas for us as well. We have a project group looking at end-to-end network slicing. We have project groups looking at the introduction of machine learning and AI to manage networks and automatically fix problems that come up in the network operation.

VentureBeat: Can you explain more about why expanding and improving connectivity is such a difficult technology problem?

Clauberg: The fun part is that customers typically don’t see the amount of technology which is required to produce the fixed network service. Typically our customers don’t look at it with a technology view. Nevertheless, it wouldn’t work without the technology driving all of this. But customers aren’t looking at what’s behind their router or into the telecom network. They’re looking at applications, at new services they can access via the network. That’s the focus area for our customers.

Bernstein: The geographic and regional diversity is staggering. The different types of networks, the different types of bottlenecks to connectivity that show up, are very unique sometimes, market by market. There are quite a few common concepts that come up, but fundamentally what drove us to approach this with a community-based approach is that there is no single way to improve connectivity globally. It requires digging in and understanding the bottlenecks that, in some cases, are specific to countries or regions or operators. We’re jumping in with a number of stakeholders who care to make things much better.

Understanding the challenges of an operator that’s approaching upgrading to 5G is obviously quite different from the challenges of an operator that’s struggling to have a profitable business model when connecting the unconnected rural parts of the world. What’s wonderful about TIP is it’s an opportunity to understand, to explore, and ultimately to come up with unique and creative solutions together, solutions that the ecosystem can define, build, and deploy. The community-based approach, considering so much diversity and complexity in driving connectivity globally, is the best approach.

Clauberg: One example is network planning. A lot of the planning tasks can be automated, and that’s an important piece of delivering quality to our users. In London this October we’re running the third TIP Summit, where we’re bringing the whole TIP community together. We’ll be showing what you can optimize in planning the network, optimizing the rollout and the experience for the customer.

VentureBeat: What are some of the other goals for the TIP Summit?

Clauberg: For us it’s important to get the community together. It’s easy to say that we’re driving a collaborative effort, but collaborative effort is dependent on people, and those people need to see each other. We’re also getting more members on board, which is an important side effect. We’ll have sessions open to everyone, TIP members and non-members alike, to spread the message of what we’re doing and what we’re planning to do. But we also have a set of closed sessions for the project group members to exchange their plans and drive their execution forward.

VentureBeat: This is a very big group. How do you manage everyone to get things done?

Clauberg: Most of the communication between the physical meetings is done through collaboration tools, whether it’s video conferencing or audio conferencing. We’re using Facebook’s workplace tools to a great extent for exchanging information. That’s been very valuable for stimulating collaboration within TIP. We have more than 500 members, and they’re spread across the globe. The only problem we can’t really solve is working across time zones. But the collaboration works across the globe, and that’s very remarkable. 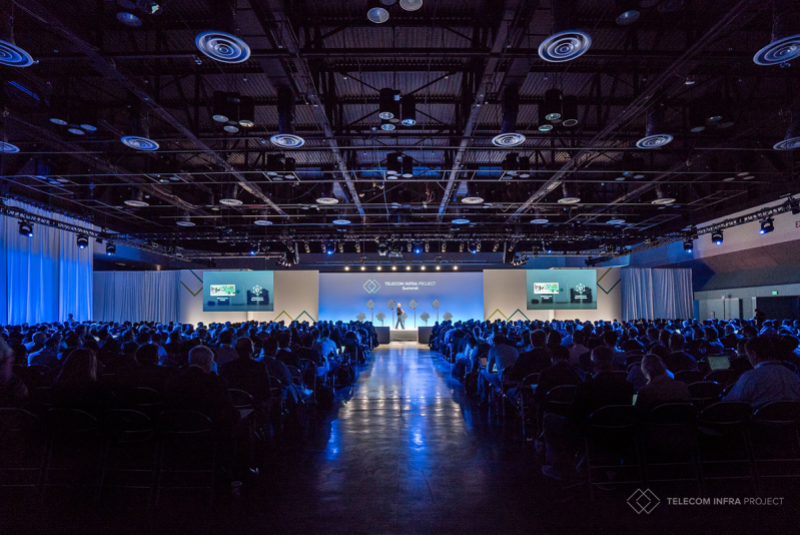 Bernstein: The project group model is also important. Each group has one or two co-chairs that are driving each of those specific technologies, and those are where a lot of the initiatives and movement happen within TIP — the project groups, the chairs, and the companies involved.

VentureBeat: Would you liken this to something like open source development, or some other model you can follow?

Clauberg: Open source is an important element, but it’s not everything. If you look at telco networks, at mobile networks for example, this is a world where you see a great amount of patents and IP our members have developed over the years. If you want to drive innovation while ignoring all of that, you’ll fail.

For us it’s very important that a project group can decide, at the point where we’re establishing them, which IP rules they’re following — whether they’re using royalty-free models, the open source approach, or whether it would be under reasonable and non-discriminatory terms, the RAND model. Most of the project groups are following the RAND model. This is key and critical, for example, for startups bringing the ideas they’ve developed into the community. It wouldn’t be possible if they had to give everything away.

VentureBeat: How would you sum up the effort here, and why it’s important?

Clauberg: In order to meet customer expectations for the future, in a time where traffic is growing and we see new applications coming — for example, on the video side, we just made the step toward UltraHD 4K videos. 8K video is about to be introduced in the next year. We see the first TV sets already launching with 8K resolution. We see AR and VR coming. The industry needs to meet the customer’s expectations at the price point the customer expects. In order to do that, we need to continue driving innovation and increasing the pace of innovation. That’s what we’re doing within TIP.

Bernstein: We also feel, beyond the challenges of the developed market, we absolutely want to help accelerate the rate of connectivity growth in markets where there is no connectivity, or people are highly underserved from a connectivity perspective. We feel like the community embracing both what Axel was talking about, as well as those driving connectivity in emerging markets — we feel like both of those are important missions within TIP.