The daily fantasy sports (DFS) industry has taken one hell of a beating these past seven months, with states from New York and Illinois to Nevada concluding that “betting” on virtual sports teams compiled from real pro and college athletes may not be a game of skill after all — it could be illegal gambling.

The two most prominent players in the saga have been Boston-based DraftKings — founded in 2011 and with $445 million in VC cash to its name so far — and FanDuel, which has raised north of $360 million in financing since its inception in 2009. The DFS industry in North America sits in something of an awkward position, with some states declaring it illegal gambling, some passing new legislation to accommodate it, and some still to make their minds up either way. And this surely can’t be good for business.

The potential for such an outcome represents a material uncertainty that casts significant doubt upon the group and the company’s ability to continue as a going concern.

Though it’s continuing to challenge the attorneys general preliminary decisions, FanDuel has already suspended operations in both Nevada and New York, which may not bode well for its bottom line. But FanDuel cofounder and CEO Nigel Eccles poured tepid water on such notions. “The loss of turnover in the states in which the group has suspended operations pending further legal clarity represents less than 20 percent of total turnover for the 18 months ended June 30, 2015,” he said.

FanDuel’s predicament helps highlight how much can change in a year. In July, the New York-headquartered company cemented its unicorn status when it raised $275 million from big names such as Google Capital and Time Warner. One week later, it made its first acquisition. Less than 12 weeks later, New York’s attorney general was knocking on its door after reports surfaced that a DraftKings employee had used inside knowledge to scoop $350,000 in a FanDuel fantasy football contest. The employee in question was soon cleared, but this event — in conjunction with an eye-popping amount of TV advertising that catapulted fantasy sports into the mainstream — opened the floodgates for scrutiny.

VentureBeat paid a visit to Eccles in his home city (hint: not New York) to learn more on where the company came from, where it’s at, and where things could go from here. 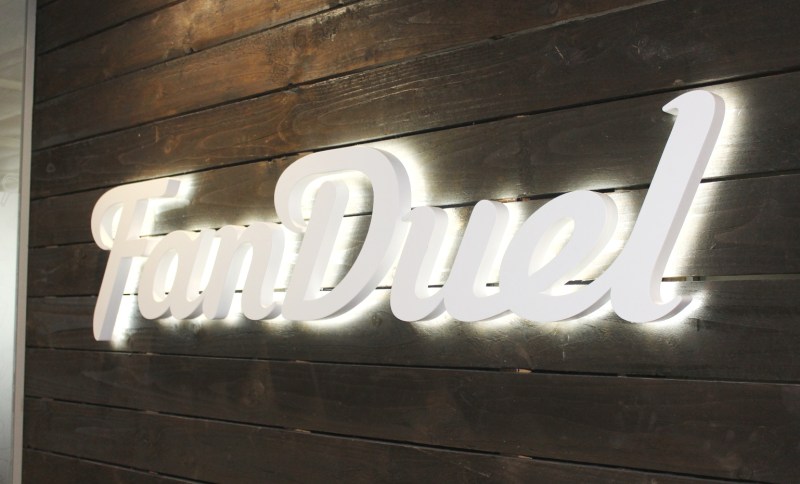 Before its rise to daily fantasy sports supremacy, FanDuel was actually known as Hubdub, a news-prediction platform based in Edinburgh, Scotland, with about seven employees. Hubdub let users bet with virtual money on the outcome of key events — for example the presidential election. Though the company received VC investment in its former incarnation, Hubdub closed in 2010 to focus all its efforts on a separate product it had launched a year earlier — FanDuel.

“It was a classic pivot,” said Eccles. “2008 was an election year, and we thought it would be cool to build a prediction market where you could predict the outcome of running news stories. And the election was one of the biggest ones. Users loved it; we had a ton of engagement. But the fatal flaw was that there wasn’t really a business model. So even though we were getting the scale in users, we just couldn’t figure out how we would turn it into an interesting business.”

The company then went Stateside to South by Southwest (SXSW) in Austin, and it set about figuring out how to move the business forward. “We said we seem to know how to build games that people like to engage with, but we really want something with more of a robust business model,” added Eccles. “And we also wanted something that people were willing to pay for.”

Noting that sports was one of the most active categories on Hubdub at that point, and fantasy sports in general was a significant market, Eccles and co. scanned existing fantasy sports products and concluded it had room for improvement. For starters, they weren’t particularly mobile-friendly at a time when the smartphone and accompanying app ecosystems were starting to snowball.

“We thought we could make them a lot better, we could make it more mobile friendly, and we could make it faster — and that was the genesis to FanDuel,” said Eccles. “Even the very earliest version, in 2009, we designed it for mobile. And now, over 80 percent of our users are mobile.”

What Hubdub had were effectively two products — the main Hubdub prediction platform, and its new FanDuel offshoot. But with fresh investors on board, the team was nervous about pivoting so soon, so it continued with both products in parallel to avoid shocking its backers. “It was much easier to say, ‘let’s work on two things,’ but once we started coding the new product, I don’t think we ever touched Hubdub again,” said Eccles.

The world was in a state of financial uncertainty at that point, with many companies missing their numbers, but after explaining to their investors what it wanted to do, it received the greenlight to go all-in on FanDuel. “Eventually they just said, ‘We backed the team, there’s five of you, we always knew it was super-early stage so if the team wants to go in that direction, let’s see where you go,” he added.

Today, FanDuel counts 360 employees around the world. Eccles divides his time between its two biggest offices in Edinburgh, where engineers represent the majority of the 140-strong headcount; and New York, the company’s official headquarters and operational hub for 160 people. Orlando, Los Angeles, and Glasgow (Scotland) make up the remaining employees, covering roles such as marketing, customer support, and engineering.

Given that FanDuel is essentially split between two key hubs on either side of a large ocean, does this cause any operational headaches?

“The challenge hasn’t been so much operations, the challenge has been more inter-office communications,” said Eccles. “From the East Coast, there’s a 5-hour time difference, so you’re only starting on emails from New York at around lunch time, and for me, 10 p.m. is when my emails start to settle down. Sure, there are a lot of evening calls, and a lot of early morning calls from New York. That can be hard, getting everyone together in one room.”