GamesBeat: I see the image on your website. Is that radar on the very first screen someone would look at on the dashboard?

Elam: Yeah, yeah. When you log in to the HUD, that’s the first thing that pops up. It’s kind of prioritizing your day. When you go click on those insights, the triangles, they’re prioritized alerts filtered from all these records and signals. The selling point for Jask is that companies can have all this raw data they have to filter through to find stories and connect the dots, so to speak, to figure out what’s actually a threat and what’s a false positive. Jask takes care a lot of that for you and presents you with an insight, so you can make a determination on whether something is really bad and how you need to take care of it. I’m still learning about this. I’m new to the industry, so I think I’ve brought some new perspective.

GamesBeat: How have you seen the cybersecurity industry collectively deal with the user interface challenge? It seems like the challenge is that there’s a lot of information that you have to throw at somebody and help them sort through it.

Elam: In terms of the dashboard, I see a lot of other companies using just numbers. Here’s the amount of raw data you’re getting. At the end of the day it’s a lot of numbers. In our interviews, our customers didn’t find a lot of use in those numbers.

We’re figuring out ways to turn those numbers into something actionable. We’re creating baseline changes, percentage changes in the last seven days or 24 hours. The short version is that I think a lot of companies aren’t necessarily visualizing data in ways that are useful. The traditional dashboard just has numbers, and maybe a graph over time. That may be useful when you’re logging into Call of Duty and you just want to see your kill/death ratio over time, but it’s not necessarily that valuable for an analyst. 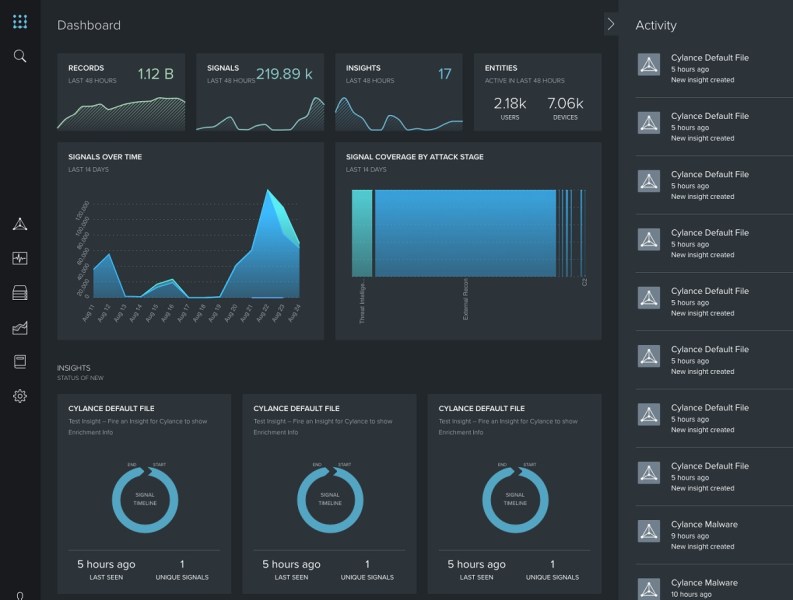 Above: This dashboard gives a lot of data at a glance.

GamesBeat: The problems seem like they’re real time problems. Does it seem almost like a strategy game, like StarCraft? Not as intense, but is there an analogy there?

Elam: It’s funny. When we were interviewing our customers and internal users, just to validate the direction we should go–because this was a big change from what we had previously. But some of them actually said, “You guys really nailed the StarCraft vibe.” [laughs] After we launched one of our customers sent a screenshot from The Last Starfighter, with the UI from the ship they were flying. Which is a huge compliment to me. I love that movie.

It is kind of a real time strategy game. It’s not one for one by any means, but there’s a strategy involved in how you go about investigating an attack, putting a thesis together and knowing from experience what could happen and learning how to deal with what happens. If you played Fallout 4, I kind of liken it to the mini-game within Fallout where you’re hacking the terminals and finding patterns to unlock them.

GamesBeat: Do you call some of this gamification? That has its own sort of history.

Elam: I hesitate to use that word, honestly, because it has its own connotations. But there are some things that we’d love to introduce. Mainly what we want analysts to feel is a sense of accomplishment when they’re using the app, and to show progression over time through the UI.

For individual and continued progression, I think there’s a lot of personalization missing from our competitors. Games do this by using experience, leveling up, perhaps achievements to show progression compared to other analysts. You could create a friendly competition with peers, maybe by adding leaderboards. These are all things we’ve considered, although we haven’t validated them with users or put any of them on the road map. These are the things we’re thinking about in terms of adding that gaming element over time.

GamesBeat: What was your most recent release? When did you do the radar, for example?

Elam: That was in early May, when we released the brand-new UI. Previously it looked very much just like the Google material design in a dark theme. We spiced it up quite a bit.

GamesBeat: What’s on your road map for what’s to come?

Elam: We do have a road map. I’m not sure I can share it right now. But we’re continually evolving. There’s some operational health things we’re working on, based on feature requests from customers. Everything right now is driven by customers and what they need, what they are looking to simplify in their working life. That’s what’s on our road map currently. Mainly just improving the utility and user experience. The gaming stuff will come eventually. 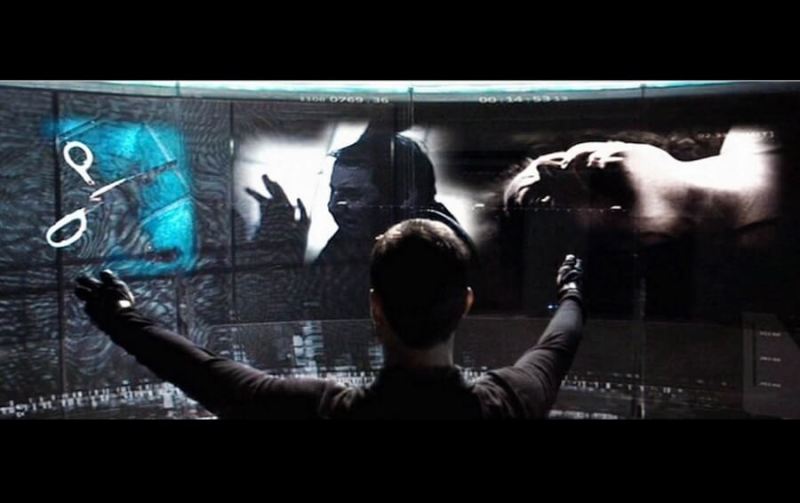 GamesBeat: Are a lot of these people already gamers, your customers?

Elam: We did some interviews while we were doing research at the end of last year. I have some numbers based on that. We interviewed five current customers from among tier one analysts and managers, as well as two potential customers at the time, plus two internal customers, employees who are analysts themselves. 100 percent of them are gamers, either currently previously, ranging from FPS games to RPGs. One of them played World of Warcraft and StarCraft. It just validated the direction we wanted to go.

The assumption, the hypothesis we had, was that a lot of these men and women are gamers, and that turned out to be true. That mirrors the article you released, which is pretty cool. I’ve been on a few new business meetings. I’m always sure to ask, regardless of how the meeting goes, “Who in here games? What games do you play?” Their eyes light up and they just want to talk about games. It’s really fun to see. One of them was huge into Hearthstone. [laughs]

GamesBeat: Is there any area where you get pushback? “It’s a professional application. It’s not really a game, so we can’t go as far down this road as a gamer would want us to?”

Elam: There’s definitely some hesitation internally, which is why we went to these lengths as far as interviewing and validating the direction we wanted to go. We have to be careful about how we display data, to make sure it’s 100 percent accurate. There are some considerations there. But I think the only other pushback — I’ve mentioned leaderboards in the past — has been around not incentivizing analysts to just close alerts and get higher numbers to rise in the ranks. Not incentivizing bad behavior is definitely a consideration.

Overall, because we’ve been talking to customers and making sure the data comes from them, our decisions are solid. As long as we can show that this is a good idea based on their feedback, then it’s slowly eroded any hesitation. Obviously this can’t be 100 percent a game. But as easy as we can make it and as fun as we can make it, the better off our customers will be.

GamesBeat: Where does Jask fit in alongside all the other cybersecurity firms? What’s your specialty? Are there things that you don’t do?

Elam: It’s built in the cloud. That’s what differentiates us from everyone else right now, other than Microsoft. They just announced their Azure product. They’re the only other cloud-native app that’s built for security. That gives us a leg up on everyone else. I think last I heard we’re a year and a half ahead of everyone else. That’s a big differentiator, that move to the cloud. 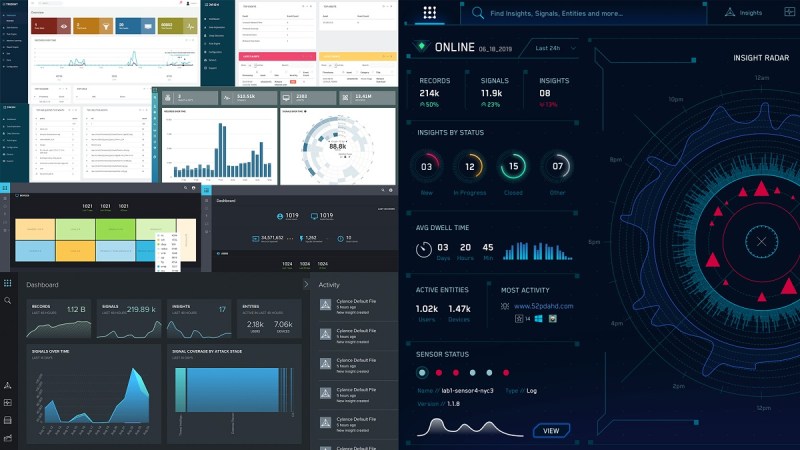 Above: The image on the right is Harlan Elam’s design for Jask. The older design is upper left.

GamesBeat: If you’ve learned any other lessons that game designers could pick up from the likes of security people, what would that be?

Elam: Analysts are gamers. We’ve already established that. They have a serious job to do. It’s a fine line, because I’m a proponent of user-centric design. The most fun games don’t always have the best user experience. I was just talking to some old Blizzard buddies today who have their own UI/UX company, and they were telling me that sometimes you have to sacrifice good UX to make a game more immersive and fun.

I’ve seen that myself in some games, particularly in Batman: Arkham Knight. I don’t know if you played that, but the inventory UI, when you’re cycling through your different skills and skills trees, it’s not that easy to use with a joystick, but it sure is what you’d imagine that Batman would use. That’s the closest example as I can give. We’re always going to try to make things as easy as possible for analysts, because their job is already hard enough. That’s something that game designers need to keep in mind. That’s not always applicable, depending on the game.

GamesBeat: I downloaded two World War II real time strategy games recently. One of them didn’t have any tutorial. I said, “Guys, where’s the tutorial?” They said, “Well, we have a manual, and here’s some YouTube videos. You can get the idea from that.” It’s funny, because I haven’t read a manual in a long time.

Elam: Yeah, it’s been a while. In my opinion — some games integrate the tutorial into the first couple of levels, so you’re playing and learning at the same time. That’s what we’d love to have happen here at Jask as well. We’re not there yet, but we will be.

GamesBeat: Did you measure this in some way? Did you get any particular result from the redesign?

Elam: We do have numbers from before and after, in terms of usage. We definitely saw a spike. Any redesign gets a big spike, but the numbers are bigger than what we’ve seen before.

GamesBeat: By the way, what are you playing now?

Elam: Right now I’m replaying Breath of the Wild with my oldest son. I play Minecraft with my kids pretty frequently, too. That’s my life stage right now.