George Fan is a master of zany game design. He created Plants vs. Zombies, the crazy surprise hit that PopCap Games launched a decade ago.

The game became a cultural phenomenon upon its release in 2009, with its oddball sense of humor where plants squared off against backyard zombies in a cartoon style. It was nuts, but it was also a well-balanced, well-designed game that consumed many hours of my life.

And it was also one of the reasons that EA paid more than $750 million to acquire PopCap Games in 2011.

EA hasn’t tallied how many copies Plants vs. Zombies have been sold or downloaded in its lifetime, but it noted in 2013 that the sequel was downloaded more than 25 million times. EA also spun up its Garden Warfare series of shooters, with a new one coming this year.

But after creating PvZ, its creator stepped back. He chose not to create a sequel to the game. Rather, Fan decided that he wanted to continue working on independent titles. Fan left EA because he didn’t believe in making free-to-play games with microtransactions. He believed in making indie titles, like the Insaniquarium game he made before tackling PvZ.

He came up with an idea for a new game during a game jam in 2012. On and off, he worked on it, and last year he debuted the wacky indie game Octogeddon. Fan is now working on a title for Wizards of the Coast, but he is glad he chose his path of working on original titles.

I caught up with him recently for an interview. Among the things I learned: It could have been Plants vs. Aliens. Here’s an edited transcript of our interview. 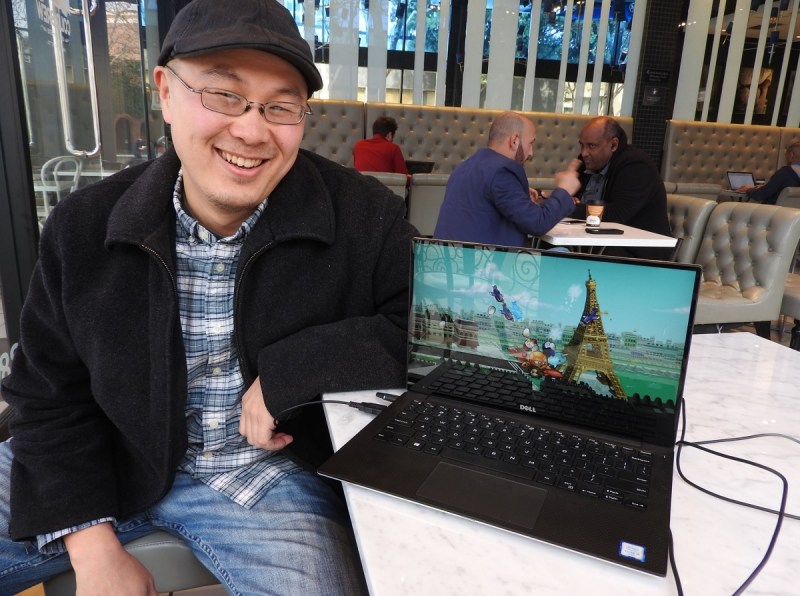 Above: George Fan is the cofounder of All Yes Good and designer of Octogeddon. He also created Plants vs. Zombies.

GamesBeat: We’re at the anniversary 10th here of Plants vs. Zombies. I’m curious what it makes you think about.

Fan: It doesn’t feel like it’s been 10 years. 10 years is a long time. It’s just crept up on me. Whoa, it’s been that long since we released this thing? It’s made me recently go back and reflect on what it was like making the game, what kind of impact it’s had.

GamesBeat: Have you tracked how many copies it’s sold, how many people played it, all that stuff? It must be harder to do that now.

Fan: I haven’t tried, but I don’t know if the people at PopCap would tell me these things.

GamesBeat: I wonder if they’ll do anything to celebrate it themselves, over at EA.

Fan: I haven’t heard anything. We’re taking the helm here and making sure something happens. [laughs]

GamesBeat: What is the actual day again?

GamesBeat: Was that a launch on Steam? What was the actual occasion for that?

Fan: I believe it didn’t come out on Steam until a little bit later. I know it was launched on PopCap’s — remember when PopCap just sold stuff on their site? A few other casual game sites had it too, on the same day. It’s possible that it came out on Steam on the same day, but I feel like I remember we were in talks about that, and that might have happened a little bit later.

I remember being concerned. “We’re selling it for a lot less on Steam than on our main site. Is that going to be an issue?” But they assured me that it’s different audiences, so it would work out fine, and it did. 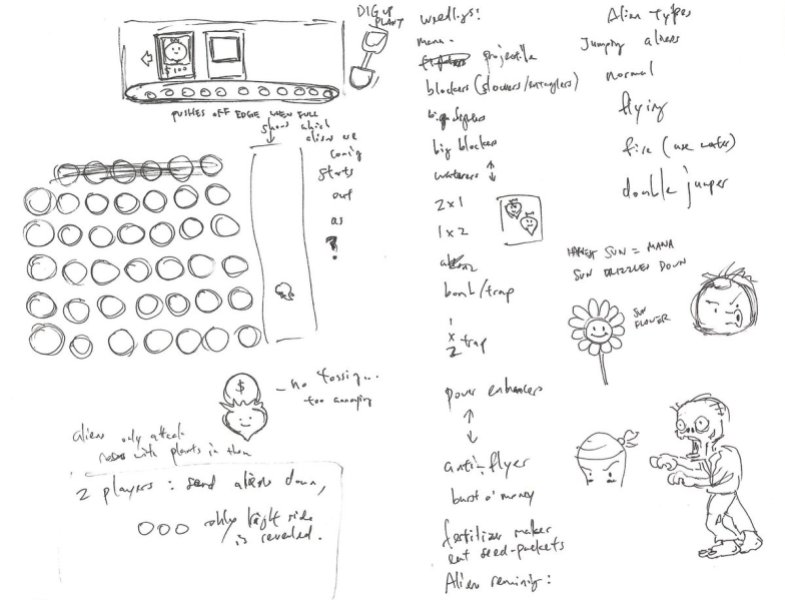 Above: George Fan’s concept for Plants vs. Zombies.

GamesBeat: Going back further than that, can you talk about the origin of it and how long it took to get done?

Fan: The origin came from two angles. It evolved over a period of time. The original seed got planted in my mind about it when — I’ve been a long-time fan of Blizzard’s games. Every single game of theirs that would come out, I’d devour. Naturally, when Warcraft III came out I played that a bunch, but I spent even more time in their custom map system, where players could make their own game modes based on the Warcraft III engine.

One of the things that was popping up a lot that I found myself really drawn to was the tower defense. There was a bunch of tower defense games in the Warcraft III engine. I kept thinking, “Why is this so compelling to me?” It made me think of this movie — I can’t say I watched the whole movie, but as a kid, I would watch the last part of the Swiss Family Robinson, the part where they set up the tiger traps and get the coconut bombs ready for the pirates to storm their settlement. Preparing for the pirate onslaught. That always gave me this unique defense, survival, setting things up feeling.

GamesBeat: I never thought of the Swiss Family Robinson as an RTS.

Fan: Right! Jumping ahead a bit, midway through Plants vs. Zombies I remembered how much I liked the last part of that movie. I thought we needed to capture that a bit more. Part of the coolness is setting up the traps and the payoff. We didn’t have anything extremely like that in the game, so that’s where the potato mine came from. You put it in the ground and then it takes a while, but it pops up later, and you’re anticipating when the zombies are going to step on the mine and explode. That was the direct result of me thinking about the Swiss Family Robinson. 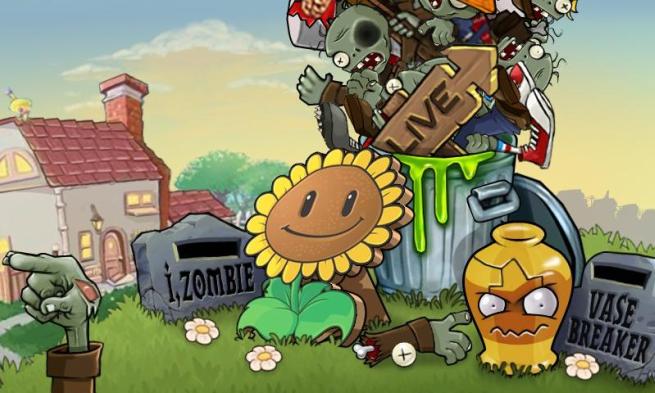 Above: Plants vs. Zombies

GamesBeat: Were you alone at that point, or were you already working with a small team?

Fan: I was working on this alone. I had been working with PopCap. I made Insaniquarium, and they helped me finish the game and publish it. That leads to the other half of where the inspiration came from. I finished Insaniquarium and I started thinking about ideas for a possible sequel to that game. It naturally led me to think about, well, Insaniquarium is about one fish tank. And the Nintendo DS was out right around this time, so I was thinking about those two screens.

Maybe I could make a game about two fish tanks, one on each screen. Or you would alternate between two fish tanks on one screen. One fish tank would be where you ramp up your economy, and the other one would be the defense tank. You’d raise a bunch of fish, like archer fish that shoot at the aliens coming at you. Insaniquarium, the original one, had at most one or two aliens ever attacking the fish tank. I was thinking there’d be huge droves of aliens attacking this time. I don’t know if you can predict where this is going.

On a sort of tangent, I was trying to come up with a gardening game. You’d pick up your seeds and things. There were originally these tuberous plants that you’d put in the ground and grab a watering can and watering them. They’d sprout and get bigger, and you’d eventually pluck them out of the ground and cash them in for money, repeating that and using the money to buy even more plants. Then you could save up to buy a cabbage-pult, which is a sneak preview of something that’s in Plants vs. Zombies. These cabbage-pults would lob cabbages at an army of aliens. It was going to be in the same universe as Insaniquarium, but the aliens were sick of eating seafood and now they wanted to be vegetarians, so they’re coming after your garden.

Two things played in — the idea of defending against the aliens while tending the garden, nurturing and watering the plants. That felt like a mismatch of gameplay, though. On one side, it just felt tedious to garden while you were trying to fend off the aliens. So what if you just planted the cabbage-pult and it shot right there? That tended to work better. It was more like a traditional tower defense game, where you could build a maze and trap the enemies. 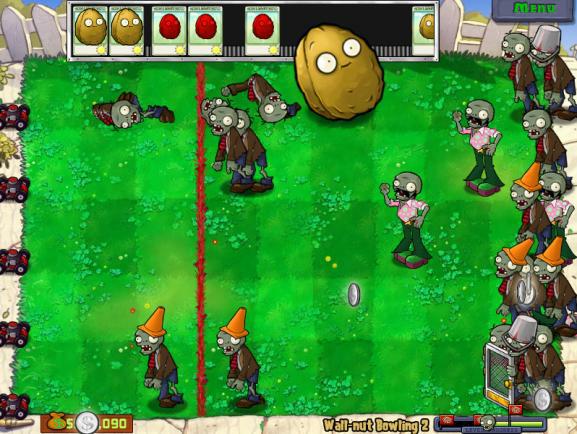 I also redid the gameplay, the lane-based thing. I had that epiphany one day. “Hey, I want to try this out.” That part was kind of inspired by an old arcade game called Tapper, where there’s some amount of lanes of stuff coming at you. I felt like lane-based gameplay had some sort of appeal, so I wanted to try it out. It was plants and zombies.