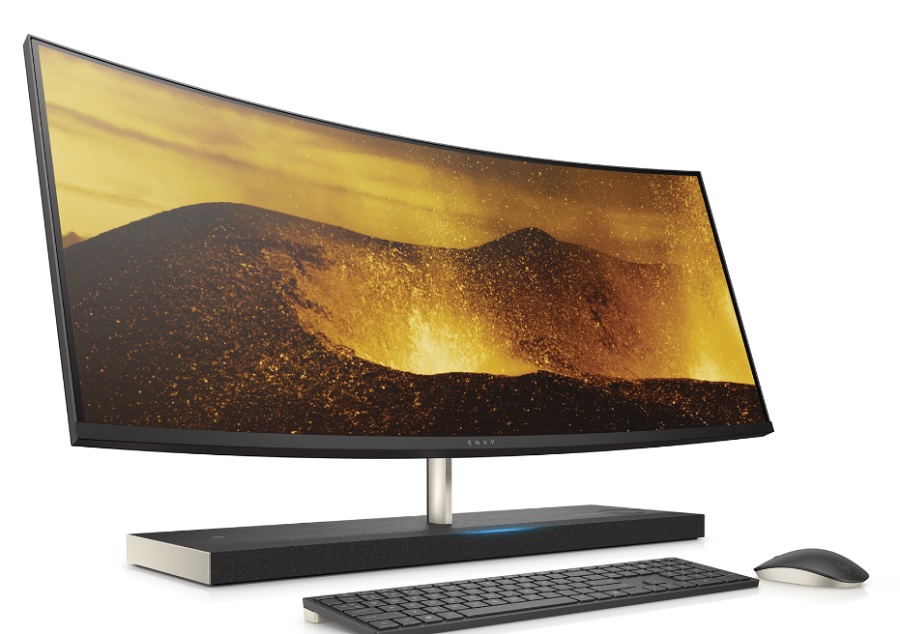 VentureBeat: I’m curious about the other end of the spectrum, too. It seems like the baby boomers are aging, getting up there, and the graying of the population is going to be a big deal. I wonder if that enters into your thinking at all. PCs have never been as easy to use for old people. They’ve never been designed with old people in mind. That could be a problem going forward, it seems like.

Cho: Very specifically, as we focus more on use cases and experiences, enabling the devices to be more personalized, more intuitive, is a key part of what you see our focus on. I’ll give you some traditional examples that have come out, and you’ll also see some other elements that are adjacent.

As an example, making our devices more voice-friendly and integrating Alexa. As you know, search is increasingly becoming instigated or initiated through voice. Second, one of the things you’ll see within our CES unveiling is that displays are such an incredibly important part of the computing experience. That’s very much the case with an aging demographic. Larger displays, more vivid displays, wider viewable displays. We’re announcing a host of new innovations across our products that allow for better display capability. That includes, on our Spectre line, the world’s first AMOLED display, which improves various dynamics of what we see people are doing, like shopping. Having colors match what you see, increasingly people are looking that, as well as the ability to see in different lighting conditions.

Those are some core areas of continuing to provide experiences for multiple generations. Then there’s the area of security and privacy and safety. What we’re finding is that security and privacy is a key part of what the older demographic is looking for, as well as the mobile demographic. We introduced, in our Spectre line, a camera that has a privacy switch on the side to turn it off. You’ll see on our new displays and all-in-ones, we have a webcam that pops in and out to give people the assurance of the camera not being on. On our Elitebooks we have a privacy camera shutter that you can physically move to assure yourself that it’s not visible.

We also look at additional ways of prioritizing security, such as what we have in our Elite lineup around SureClick, to ensure that you won’t be introducing any malware onto your device when you click on a bad link. That’s increasingly on the minds of a broader demographic.

Earlier this year we introduced a dedicated health care portfolio that looks at the specific needs around safer, more sanitizable, and smarter devices in clinical environments. We’re also looking at needs in that space. As we look more at our customers and use cases and experiences, we’re finding that gives us a rich set of areas to deliver an expanded set of experiences that might be core to the device, or adjacent to it, or even new segment opportunities. 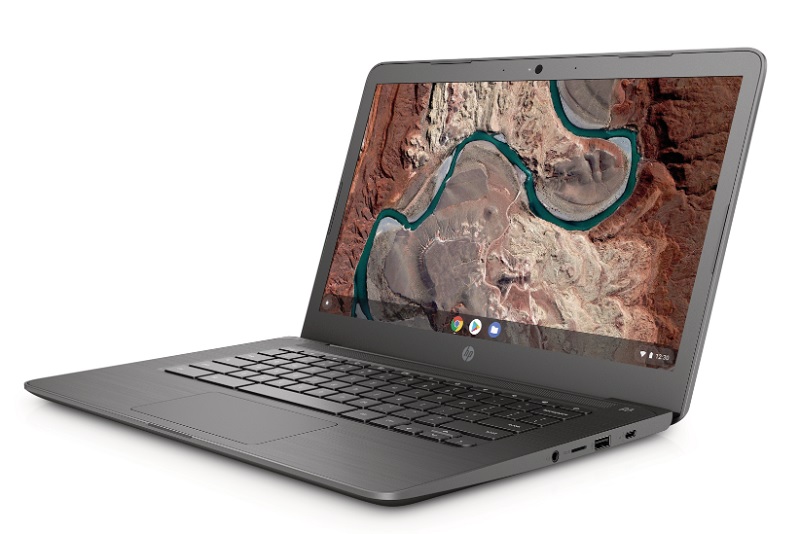 VentureBeat: I was impressed with Microsoft’s effort this year, announcing their Inclusive Technologies Lab and creating their new controller for the Xbox. That was an interesting direction for a big company to go in, thinking about increasing accessibility to console gaming. It seems like that kind of effort should happen with the PC as well.

Cho: I think what you’ll see, at least from us, is that we’re continuing to sub-segment the market and look at different customer segments. From there, we’ll identify—I mentioned examples before around how we can offer more ease of use experiences for customers.

VentureBeat: For CES, do you think there will be big trends that you’re going to care about more, or that you’ll notice more, relative to other things? We’re assuming that AI is probably going to be front and center for almost everyone.

Cho: It’ll be interesting to see what actually catches attention. I think there’s going to be continued focus on AI. Quite frankly, right now it shows up in many different forms. You’ll also see a lot of progress continue in the whole area of displays. We’re doing a lot around display technology. As we continue to show new technologies around how to get increased performance that’s relevant environments—gaming is one key area in that. We’re introducing, as you’ve seen, not only more immersive experiences, but just higher performance and better refresh rates, so these experiences are even more engaging and more dynamic.

You’ll see a lot more performance. You’ll see a lot from us around the wonderful world of displays and how important that is for our customers, the opportunities to innovate around them. And then around things that are more smart and personalized. The whole area of personalization in design is a key part of what we’re highlighting. As we look at our customers, 79 percent of them are keeping on top of the latest technology trends, but they also want great design. More than half of millennials say that design is one of the most important factors in choosing a PC.

Not only is design important on the outside, but they’re also very much interested—talking about displays, again, they very much want design in terms of how it comes across in what they can see. That’s why we introduced the Spectre Folio a few months ago, and we’re introducing a new CMS, Bordeaux Burgundy, which reaches out to a broader audience. We have a 4K display option. Increasingly we’re finding that these devices are very much a reflection of who people are. They’re looking for more personalization. We have our new Spectre X360 that has the world’s first AMOLED display on a 15” laptop, but as well, it has this new CMS, Poseidon Blue, that’s been an important part of continuing to provide new types of design language and new facets of design for the X360 itself, to provide new styles among our lineup.

You’ll also see the demonstration of our next-gen Sure View. People used to put screen filters on their notebooks, with the little tabs on the side, so you couldn’t see the screen from one side. We introduced the world’s only integrated electronic privacy screen. By pressing F2 you can toggle between normal mode, and then you press it again and you can only see the display when you’re standing right in front of it. It’s been one of the most exciting innovations that the teams have delivered. It started in the commercial space and we’re now introducing it into the consumer space. We’re now on to Gen 3, which has increased performance.

Our first design center, interesting enough, was coffeehouses. We were following a lot of millennial workers, and they’re working a lot more in coffeehouses and other public spaces. They were always trying to make sure people weren’t peeking over their shoulders. One of the areas that’s been most meaningful for me, and we’ve gotten a lot of feedback, is the tremendous value on airplanes. It’s very valuable for me because of all the time I spend on airplanes. You feel more free to be working on your sensitive Powerpoint slides or whatever it might be while you’re on a plane.

One of the announcements we’re making at CES is that we’ll be introducing it in the world’s first implementation around all-in-ones and larger displays. With all of these open offices — in the U.S., estimates are that up to 70 percent of offices have an open layout – privacy is one of the things that people are looking for more. We’re excited about what we can offer with Sure View, the technology we’re taking from our notebooks to our all-in-ones and our displays. You can imagine that in an open office, people will have a lot more privacy, and that’s what they’re looking for. They’re looking to ensure that even in an open environment, they’ll have a lot less of what they call “visual hacking,” where people look over your shoulder and try to figure out what you’re doing. That’s an important part of what we’re announcing. 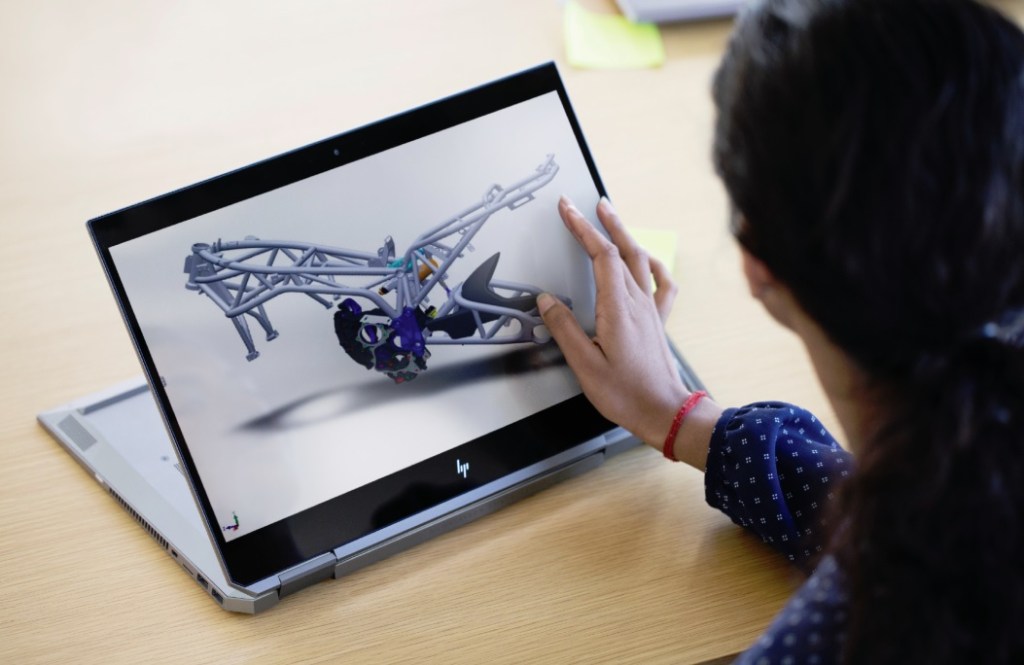 VentureBeat: One of the areas that doesn’t seem to have caught on like everyone expected is VR. Where do you think that is right now as far its growth or momentum?

The reason why it’s very exciting in the commercial space is that the benefits are around efficiency, around better accuracy. I’ll give you a great example. We just opened up our new Houston site last month, in December. Other than the ground-breaking day, when I was there, I actually didn’t have to travel there. I could get updates, because we had a VR visual of the environment that we could use to provide feedback. You get the immersive experience. You can give real time feedback. We see that as just one example of how VR has a lot more opportunity to add value into the commercial space.

If you think about location-based entertainment, we have a Jurassic World experience, one of the largest VR rollouts in North America, that’s powered by HP VR solutions. It’s at Dave and Busters around the U.S. That’s another example of how VR has a huge opportunity to provide value in the commercial space going forward. It’s still nascent, but we have a lot of pilots and deployments. You’ll see a lot more from us as we go forward.