The game added co-op play with two human players for the first time, and that changed the way that the team created their designs. I played the game and then interviewed onstage Andreas Öjerfors, Alissa Hägglund, and Aydin Afzoud about the design challenges MachineGames faced when the Wolfenstein franchise took the step from a linear, directed single-player experience, to an open co-op experience.

The team had to change major game mechanics to facilitate a new structure for storytelling, enemies, missions, player progression, and weapons. We talked about the origins of co-op, the new approach to the story with BJ and Anya’s twin daughters, training the engineers, the tricks of seamless drop-in and drop-out co-op, and balancing the levels. They also spoke about the contributions from sister studio Arkane, and how they are still working on improving the game. 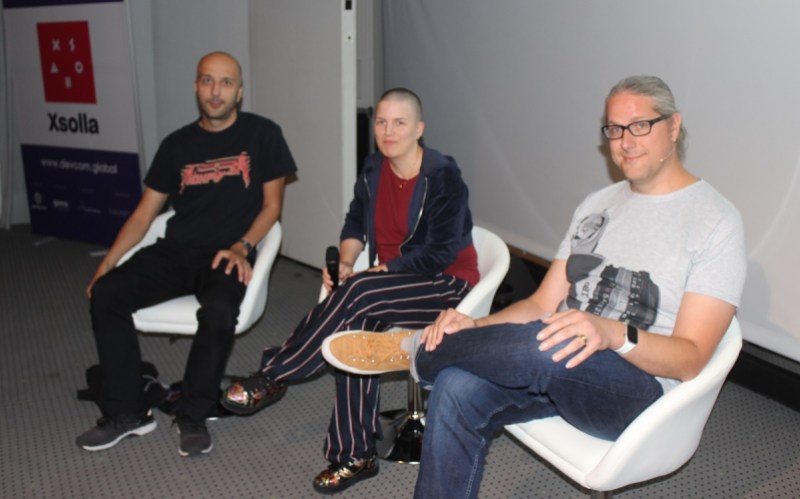 Above: Left to right: Aydin Afzoud, Alissa Hägglund, and Andreas Öjerfors of Machine Games at Devcom 2019.

GamesBeat: I’m about 85 percent of the way through Youngblood [note: I have since finished it]. I think I’ll need help through the last part. Would you like to tackle the short history of Machine Games and how it came together?

Andreas Öjerfors: Machine Games is about nine years old. I started to work a bit later than that, on New Order, in preproduction. Machine Games is a studio in Uppsala, north of Stockholm. We started as an exodus from Starbreeze. Some of the directors and creative leaders from Starbreeze, which was in Uppsala at that point — now it’s in Stockholm — left to start something new, try something new.

They struggled for years to try to find someone to cooperate with, basically to find the money to make a game. The reason the studio is around today is because they got together with id Software, and they pitched the idea of a Wolfenstein game where the Nazis had won World War II. You’d jump into the 1960s and get that alternate history going. Bethesda and id loved that idea, and that’s how it started.

GamesBeat: Wolfenstein is your entire history, then?

GamesBeat: What are the origins of the latest game, and deciding to make a co-op game?

Öjerfors: We have a certain process or tempo for making games. We make one big game that takes about three years, and we start from scratch each time. We put a lot of resources into that game. Once that’s out the door, we make these sort of side projects, between projects, that take about a year. We build them on top of the systems we built for the previous big game. Then we start over with another big title, another three years. That’s the way we’ve been going so far.

We started with Wolfenstein: New Order, the big one, and then we did New Colossus, which was the side project. It used a lot of the systems and gameplay of New Order, but it had new actors, new weapons, and new levels. The idea was that next we’d do the same thing as New Colossus. But the idea of co-op and having this more open and unstructured world came into the picture. It became a much bigger project than we’d first thought. It took us a year and a half to build. The only reason we were able to build that big a project in just a year and a half was because of our partnership with Arkane.

Aydin Afzoud: We’d always wanted to explore co-op and make a co-op game. It’s also something that our fans had asked for. They wanted multiplayer, the ability to play with their friends. That’s always been our desire. Like he said, this smaller project, compared to the big game–that made it pretty natural to do the co-op these time.

GamesBeat: On the story side, how did that come along, playing the two daughters? Was that something you were thinking of doing before you chose co-op or after?

Afzoud: The type of co-op that we made for Youngblood, the type of co-op we wanted to do, is one where the players are–it doesn’t matter which character you play. You’re on equal footing. Twins make that a natural. They’re born at almost the same time. They’re equal in combat proficiency.

Öjerfors: It’s an old-school thing, that two-player co-op. We play around with a lot of old-school concepts at Machine Games. We have the Wolfenstein series as our base, so we try to take some of those older ideas and make them something modern.

GamesBeat: Did you think about split-screen co-op?

Afzoud: We wanted that for Youngblood, yeah, but it’s tricky to do. You have to render the image twice. It’s a very difficult goal when it comes to the fidelity we have in the game, the visuals. It has a lot of implications, to make a split-screen game that runs at 60FPS. But there’s also the question of–people mostly play co-op games remotely now. People play with their friends, but remotely.

Öjerfors: We’d never done a co-op game before, so it was a huge undertaking for us. We kind of had to choose our battles. 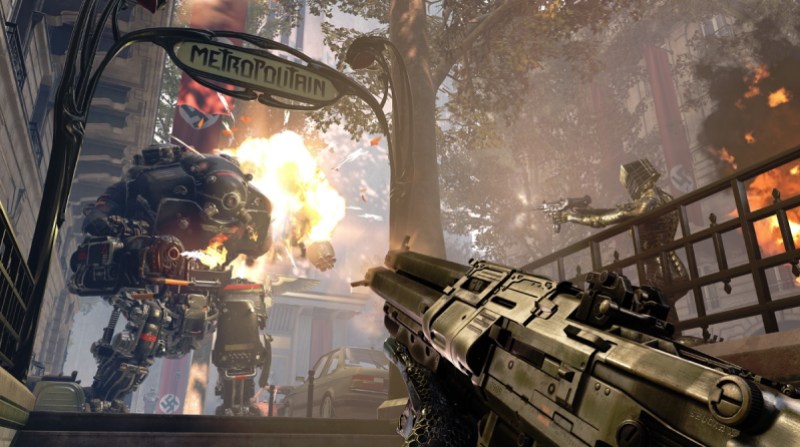 GamesBeat: And you couldn’t do Lego Wolfenstein.

Afzoud: [laughs] Well, I don’t think Lego would want to do Wolfenstein.

GamesBeat: How did the co-op decision change how you make Wolfenstein?

Öjerfors: As far as gameplay, the beating heart of Wolfenstein is still there, the alternate history and the intense combat where you gun down Nazis, where you’re almost overwhelmed by them. You’re exploring these pseudo-authentic environments. That’s still Wolfenstein to us, and that’s still there. But changing what we feel is Wolfenstein into co-op was a big difference.

The biggest thing we had to realize is, what’s the core of a co-op game? It’s not just about putting two players into Wolfenstein. It’s about changing the levels and the combat so that there’s something to cooperate around for the two players. Each combat scenario should be something where you don’t just have two players shooting. We had to make sure that they fight together and cooperate over something.

We did that in a number of ways. One way we did it was to select a few key enemy types — the bigger, monstrous enemies — and we made them tougher, so they become these focal points of the combat loop for the two players. It’s a good idea to have two players when you try to take those down, like the super-soldiers. Compared to the Wolfenstein series now, we built tougher enemies. It’s a good idea to have one player draw the super-soldier’s fire while someone else fights him directly.

We tried to create a mix where we still have soldiers that are easy to gun down. You still get that faster pace that you’ve always gotten from Wolfenstein. But we mix that with these tougher enemies.

Hägglund: When it came to level design, it was really good to work with Arkane on this point, because they really know their stuff. In the previous Wolfenstein games, the level designs are more linear, more cramped. Most of those wouldn’t be as interesting in a co-op game. We got a lot of help from Arkane on the level design.

GamesBeat: There are a lot of bigger, open spaces.

Hägglund: Right. Also, not just bigger and more open, but they give players more of a choice in how they move through the levels and take on the enemies.

Afzoud: And multiple enemies approach you in the combat scenarios. 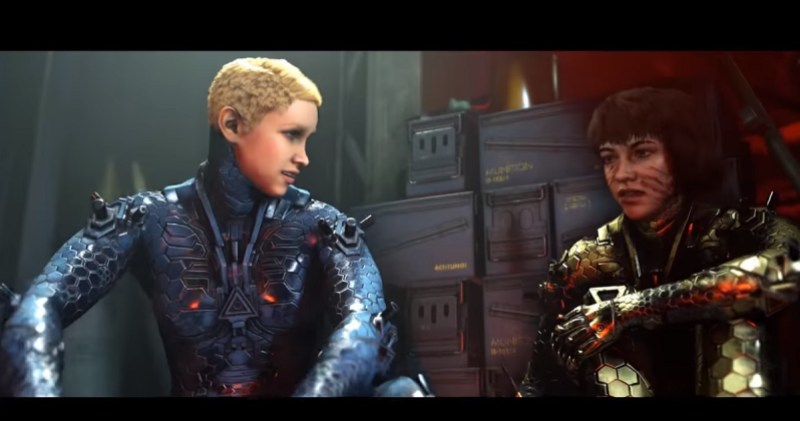 Above: Wolfenstein: Youngblood is a co-op shooter that features B.J. Blazkowicz’s daughters.

Öjerfors: Something we tried our hand at in Wolfenstein II was to offer a choice between going in guns blazing, the more nostalgic approach, or being more tactical in your approach to a combat encounter. Youngblood does that so much better, because Arkane are monsters at doing that. You’ve seen it in the Dishonored games and Prey. We’ve learned a ton from their approach in how to make levels like that.

GamesBeat: As far as unequal abilities go, in four-player co-op there’s often a pattern where someone plays the sniper and so on. Did you ever think about trying to mix the two characters up in some way, with different abilities?

Hägglund: We wanted it to be a sort of buddy action-adventure thing. When you start the story, they’re pretty same-ish, but then each player can customize their character in the way they want to play. You can support your friend, if you want to do that. If you both want to play the same way, you can do that as well.

Afzoud: That also ties into the whole twin thing. When I play with Alissa, maybe I’ll go for stealth while she becomes the jack of all trades. That’s always possible.

Öjerfors: The drop-in drop-out nature of the co-op plays a role there as well. You’re not necessarily going to play with the same person throughout the entire game. You might play with different people. If we’d based that gameplay around two classes or something, where one sister is one class and the other sister is the other, that might not have worked out so well. If another player comes in running the same class you do, the game might just break down, or at least become less entertaining.

GamesBeat: How did you technically learn how to do co-op?

Öjerfors: That was a huge challenge from a team perspective, because we hadn’t done before. But we’re part of the Bethesdasphere of games. We have access to people who’ve worked on things like Quake Champions. We have access to the people who worked on Elder Scrolls Online. Very early on in the project there was a small tour where a few of us, just me and a number of engineers, we went to Bethesda and Zenimax Online to talk about how they approach the engineering challenge, mostly, of building a game like this. 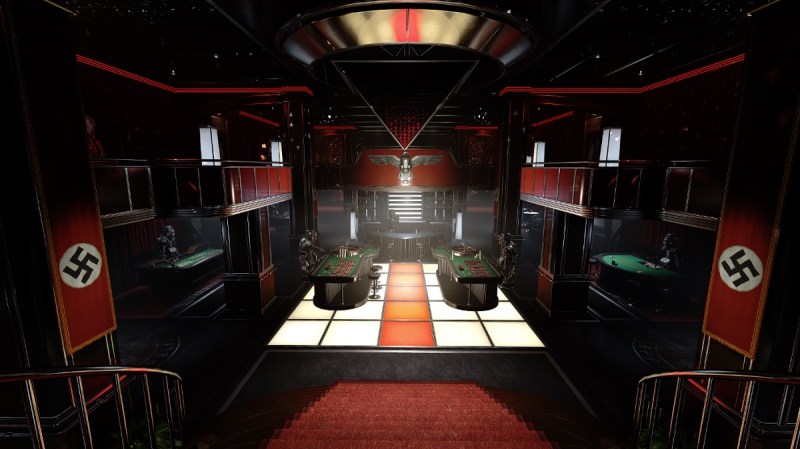 GamesBeat: You mentioned that it was a smaller project. I assume you don’t want it to be viewed necessarily as a lesser project, though. How do you figure out that this is going to be a smaller game, but it’s going to be as good as any other Wolfenstein games?

Afzoud: When it comes to the smaller projects, that’s mainly smaller in terms of time constraints and resources available. If you compare Youngblood to Wolfenstein II, there’s actually more gameplay time to be had in Youngblood. It’s a longer game. The end product depends on how you look at it. It can be bigger or smaller. There’s multiplayer, an open world. It’s a bigger project, but it was done in a shorter time.

Öjerfors: It’s tricky to talk about the game, because we don’t actually want to give people expectations that are different from what it will be when it’s released. We don’t want to overhype anything. It’s been difficult for us working at Machine Games–this big project, smaller project pacing is something that’s very clear to us, but it’s not as clear to everyone playing the game or all the journalists we talk to. We’ve been trying to talk about this as a side project, but at the same time, compared to our older projects, it’s a much more ambitious game, a much bigger game. It required the collaboration with Arkane to pull it off. So it’s been tricky to control expectations.