GamesBeat: What have you been saying about the number of hours involved? I’ve played about 40 hours to get 85 percent of the way through.

Öjerfors: It very much depends on the player. You can finish it in nine hours if you want to, but there’s much more to discover.

Afzoud: If you just want to blaze through, yeah, about 9-12 hours. It depends on if you do the side quests. There’s definitely a lot to do. I think 40 hours–that’s a lot of hours, but you’re clearly doing some extra quests and exploring everything and picking up everything, which is nice. 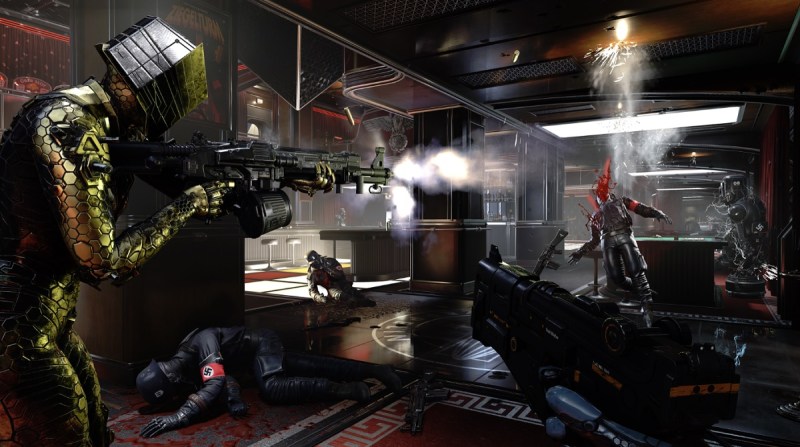 GamesBeat: As far as seamlessness goes, it sounds like you wanted to do that, but I assume it’s not easy to make the drop-in drop-out aspect happen.

Afzoud: That’s been a Herculean task by our programmers, to make that happen. When we talk about this project, we say things like “side project,” but that doesn’t mean we’re doing it on the side. This was all hands on deck, the whole studio working on the thing. Two studios, really. The programmers had to implement full seamless multiplayer in the game. That was a big task, and they pulled it off.

Öjerfors: We started working on the project with no server programmers. We had a number of generalist programmers who don’t specialize in any field. They know the entire engine and they can go into any part of it. They gained the knowledge of how to do it. They were working really hard.

GamesBeat: On the cinematics, is there a clear difference in how much of that you wanted to do or were able to do in this game?

Hägglund: That touches on the production time. It takes a lot of time to build cinematics. There was a choice to make this game a little less narrative-heavy because we wanted to focus on the co-op buddy experience. But of course, story is very important to Machine Games. A lot of work was still put into the narrative, to make it work more in the co-op context of Youngblood.

Öjerfors: It’s also about time. If you throw a lot of people at the problem–doing the kind of storytelling we had in New Colossus for example, it’s going to take a long time no matter how many people you throw at the problem. You have the writing process, the casting process. We shoot those scenes in L.A. and they have to be cleaned. It would take more than the year, year and a half we had on this project to do that.

GamesBeat: You had some nice touches, like the pep talks. They seemed to fit the personality of the characters.

Afzoud: That system actually started out as a tactical hand signal system. But it quickly changed to something that ties into co-op. You can buff your sister, help your sister. That turned out pretty well.

Hägglund: It fits with very well thematically with the tone of the game. It’s a little goofier.

Öjerfors: We were looking for some other way for players to help each other in combat. We had that framework for doing hand signals, as you said. I think that was your idea, to tie those two together.

Afzoud: We actually did try high-fives in the concept stage. Maybe hugs. But that requires both players to be in the same place at the same time, doing the same control input. That’s why we moved on to signals.

GamesBeat: I got a sense that a solo player playing with an AI partner is having a far different experience from two human players. What do you do there? Would the same level, the same boss fight be entirely different? Was that a problem?

Öjerfors: It was an enormous challenge. Again, it’s pretty incredible how many challenges we chose to take on for this project. Just having an AI companion is a huge, huge challenge for any team. If you look at BioShock, for example, they always talk about how difficult that was. And in that game, the companion doesn’t really contribute to combat. She doesn’t fight. Ours do that. It was a huge, huge challenge.

The idea was to try to have a similar experience if you play alone. The AI sister acts pretty human and helps out in combat. There’s a number of design challenges there. The game is balanced for two players. We wanted to have a companion who is competent, who can hold up her part of combat. But we don’t want to have her dominate, because that would feel pretty bad.

Afzoud: It also has to do with expectations. As players, we know when we’re playing with an AI, and we expect certain things from an AI. If I play a game with an AI character and that character doesn’t help me when I feel like it could help, I’m going to think, “What’s wrong with this game?” If I’m playing with a human character and they’re not helping me, I just feel like that’s how it is sometimes. It’s a balancing act, plus the expectations people have of both the AI and other players.

GamesBeat: It seems like you have a very different experience if you have two friends playing with microphones, so you can talk to each other. You know what to do — “Come help me open this box,” something like that. 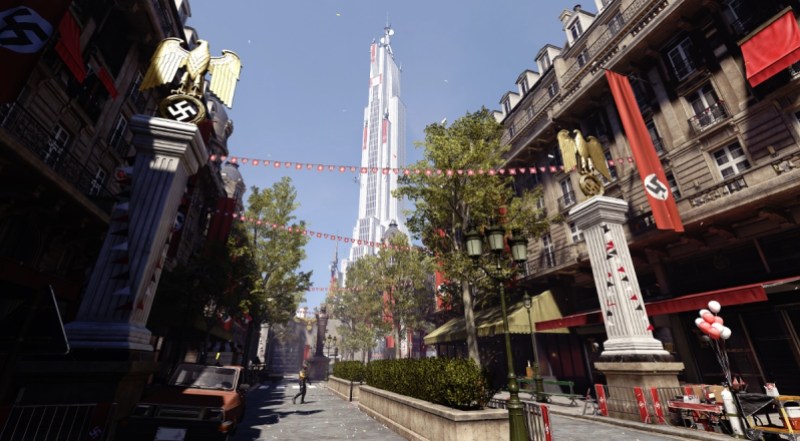 Öjerfors: One thing we wanted the AI to do is behave like your sister, to feel fairly human. One way we tried to do that was to have that banter between the sisters going on, for her to act naturally. Another rule we tried to stick to, and I think we did this fairly well, is that the AI companion should never be frustrating. She shouldn’t slow you down or be difficult to deal with in the combat you’re facing.

Some players have said that it’s too easy for the AI players to get downed. If that happens–at least in a lot of cases, that’s going to tend to be your fault, because you’re pushing too hard. The AI companion follows your lead in combat throughout the level. If you push too hard, she’s going to push too hard. If you take a more measured approach it’s going to work out much better.

Question: Is there anything you’d change if you took on this project again? What do you think you’ll be taking with you into another Wolfenstein?

Öjerfors: We had a long period early on in the project because we were doing some very new things for us. We had to experiment a lot and try a bunch of different things, trying to find the fun in co-op combat. That was something that took a much longer time and became a much bigger part of the project than if we were just building another single-player campaign because we already know how to do that. We know how to make good combat scenarios in single-player. That was a long time period.

If we were to do anything differently, I’d probably suggest scaling the drop-in drop-out co-op. We could add scaling to your level, so that you match your friend’s level. But those are things we’re already fixing now.

Afzoud: There are some features we wanted to put in the game, but it’s a very big game, and we only had a year and a half. For example, pause in single-player. That’s something we knew we wanted, and unfortunately, we couldn’t just keep adding to the time schedule. But that’s something we’ll be adding to the game. It’s something people have requested. We’re always evaluating and checking out reactions and seeing how we can update and improve the game.

Öjerfors: Something like the pause function seems like an obvious thing to have. It almost seems silly to leave it out. But the reason we had to leave it out–when we added this multiplayer nature to our existing systems, it proved extremely difficult from a technical perspective. I’m not an engineer, but I understand that in Youngblood, it’s pretty easy to get all the systems to pause, but then to get all the systems back up and running again in multiplayer, to unpause the game, that’s a huge challenge.

It’s obviously something we wanted to have in the game, but it wasn’t possible at launch. We’ve realized, based on our feedback, that this is obviously very important to people. We’re doing that work now.

Question: Do you think you’ll use the design you’ve developed for co-op in future games? Could it just be added to another single-player Wolfenstein?

Öjerfors: Our co-op gameplay in Youngblood requires a lot of different things, from the way the enemies are balanced to the way the weapons are balanced. Our whole approach to level design and gating the player is different. So we couldn’t just take Wolfenstein II and add another player. It would probably break down very quickly from a technical and scripting standpoint. It wouldn’t be any fun. It’d just be frustrating, with one player rushing ahead.

Question: I finished Youngblood, and I had a lot of fun with the AI sister. I did have some problems, though, when I was downed in combat and she didn’t revive me. Is that something you’re trying to work on?

Afzoud: We’re always looking at bugs and feedback, and I’ve also encountered that in the game. When I encounter that, though, what usually happens when I look at the situation is that I’ve got, say, two super-soldats and some elites shooting at me. At least in my cases, maybe I was pushing ahead a little too hard. If there was a human there, she wouldn’t be able to resurrect me, because she’s fighting all these hard enemies. But we know that there are some instances where that happens, and we are looking at it.

Öjerfors: A big part of the process at Machine Games right now, we’re looking at all the feedback we’re getting. Where we think it’s important, we’re trying to fix it, and we’ll be going at it for a while. We’ll be launching another patch soon, and more is coming.

GamesBeat: There’s a design thing there too, right? If you press the button for, “I’m in trouble, come help me,” maybe the sister can communicate back to you, “I’m under attack, I can’t do that now.”

Afzoud: She’s programmed to respond to a combat situation tactically. For example, in my situations where that happens, it would be tactically and strategically detrimental for her to run up and rescue me. She’d absolutely get shot down.

Öjerfors: This isn’t the type of game where we launch it and then we’re on to the next thing, of course. We’re talking about the next thing at Machine Games. There are a lot of people at the office working on new patches for the game, though.