GamesBeat: What would you say are some lessons as far as business strategies to avoid here? Given that there were rocky times for the military simulation market in the past, what do you think you’ve learned about what to sidestep this time around?

Stealey: What happened to MicroProse in the end, when I was running it, is my guys got tired of doing military simulations. They still sold. But we did Rex Nebular and the Cosmic Gender Bender. We did Darklands. They turned out to be OK games, but that’s not what the MicroProse customer was looking for. We spent millions of dollars trying to be Sierra On-Line or somebody else like that.

I think David has a vision of building a real mil-sim company, because there really wasn’t any other company besides us and Gilman Louie with Spectrum Holobyte doing that. EA hired two of our best programmers and had their Jane’s thing for about four years, and it went away. Name another military simulation company that did as well as MicroProse. There were a couple of little ones, but not big ones. I think we can have a theme to our games, and we can be careful to stay in our lane and do great games and keep them coming back for the next one.

I don’t think there are any business mistakes we have to avoid, and I don’t think the mil-sim went away. I think some of the bigger companies found ways to make shoot-’em-ups and they sold. Here comes Call of Duty one. I still have it on my computer, for God’s sake. But I think the issue is, you have to figure out where you’re competing. Am I competing because I have the best graphics in the entire world? There are flight simulators out right now that look beautiful, but there’s no game. You don’t have to sneak under the radar in your F-117 and complete the mission and get home and get cheered in the bar. They look beautiful, but they suck! I’m sorry.

Lagettie: I think Bill nailed it. We have to try and stay in our lane. As you can see with the games we initially announced, in that war genr e– you’ll find that we probably stick very close to that. Initially, and even for the next couple of years. I don’t think you’ll see a Rex Nebular remake any time soon, but never say never. The funny thing, I get emails from a lot of people asking about it. Bill and I have a laugh about it. Darklands turned out to be a classic. The amount of people asking about Darklands — but again, I think for me personally, my proposal for at least the next couple of years is to concentrate on what we do best and what we’re known for.

My background is military sims, all aspects of military sims. That’s what we’ll concentrate on initially. Some of the games in our lineup aren’t anything to do with military subjects at all, so it’s not like we’re doing all mil-sims. In fact, there are two or three games that definitely aren’t to do with anything military. But they’re games that people will be happy to see within MicroProse.

Getting back to your question about companies that might have failed over time, if you see from the first three titles we’ve announced, and then we’ve made a tentative announcement of Mighty Eighth, we’re going to stick with what we’re known for and what we do best. And very particularly, we’re not going to overcommit ourselves, our resources and people. We’re very measured. There are a lot of expectations for us to put out Grand Prix, to put out Falcon 5, and all of these are options for the future. But let’s do what we do best and get these other games established.

We have a lot of games in development. We’re going to make a lot of people — both the original people who followed MicroProse and a lot of new people discovering MicroProse — quite happy. We’ll have physical boxes and physical manuals. These are things that will make up the body that makes up MicroProse. Hopefully that’ll keep our sort of people happy.

GamesBeat: Did you have some favorites from the MicroProse era?

Stealey: I liked Gunship, because it was the first year we broke $10 million. We sold Gunship everywhere. I’ve seen some art that David’s put up, and I’m not sure, but I think he seems to like helicopters too. I loved Tank Platoon. And because I didn’t get to fly the F-15, that’s why we did F-15 Strike Eagle. I told someone recently that people would call us or get on our bulletin board and tell us we didn’t know what we were talking about with the F-15. Luckily, I hired two F-15 pilots to answer all those questions.

We loved them all. I was not that big a fan of Rex Nebular until I actually played it, but it was a pretty good game. I just didn’t know how to market it. You can’t put on your flight suit and go market Rex Nebular. I was going to have to wear a bikini, and that wouldn’t go over too well at a trade show.

Lagettie: For me, nearly all those games, especially the simulation games — European Air War, Falcon, Grand Prix — I’ll be honest and admit I never purchased Rex Nebular. Even Darklands, I don’t think I ever purchased Darklands. But any of the simulation side of MicroProse. B-17 is probably one of my favorite titles. European Air War, I loved. And obviously Falcon. But there are so many. I’m standing in front of my wall right now, all the games, and they all have different memories. Gunship in particular is a huge one I remember, because I bought that when I was away studying. I didn’t have a computer, and so that’s why I read that manual front to back maybe two or three times. Hopefully you’ll see some of those sneak back in at some point.

Stealey: I just want to make sure that if we do Silent Service, I don’t have to argue about the deck gun. We will have a deck gun.

Lagettie: You will have your deck gun, for sure. What a great game that was originally. Sneak up to a fleet, incredible. There you go, another one of my favorites. I’m looking at that box right now.

Stealey: I was in front of about 20 Sears executives, and Sid Meier and I had been arguing about deck guns. Evidently the American submarines didn’t have deck guns until 1944. Sometimes we got in our own way trying to be a really good simulation. I said, “Sid, I’m going to demonstrate to these people, and they’re not going to understand all this sneaking around. We need a deck gun.” Well, I went up to them, all standing there, and I’m on a big screen connected to a Commodore 64. I take on some destroyers, and they depth charge me. I have to come to the surface and I’m running like heck. I get one of them with a torpedo and the other two I shoot down with the deck gun as I’m running away. They said, “We’ll take 50,000 copies.” Well, good deal for the deck gun, baby.

GamesBeat: Bill, you were a military pilot. David, did you have any early attachment to the military in some way?

Lagettie: I’ve never been in the military. In fact, I was going in the navy when I was 17. I was going to be a clearance diver. I got an apprenticeship in refrigeration and air conditioning. The navy wanted me to finish out what year 11 is here in Australia before I could go in. And the very day before I started that year, I went for a job interview that my mum set up, a job I knew nothing about. I was always into electrical and engineering types of things my whole life, and I got that job, so I never did end up going into the navy.

But my dad did two tours of Vietnam. This is a side note for you, but how I got into Operation Flashpoint is really because of what happened to my dad in Vietnam. One of his good friends died in 1970, and I wrote a song called “Lifeless.” That’s the main track to Operation Flashpoint. That event that happened in 1970 is why we’re sitting here talking today, if you can believe. You’re the only person that actually knows that.

When I was a child, really young, my dad’s friend was killed, and I remember growing up and hearing about how his wife had a young son, who was the same age as my brother. My brother’s seven years older than me. We’d often see them at events in town, right through the late ’70s and early ’80s. I would always, as a kid–you’d hear your mum and dad talking at the table about such a tragedy. This poor woman never remarried. Her son was very young at the time, six or seven, when his dad died. And to this day it’s such a sad thing. But that’s why that song was written, and that was the song that was picked up by Codemasters and Bohemia Interactive for the main soundtrack to Operation Flashpoint.

It’s quite strange, but that song is the link between everything. The two biggest mil-sims in the world are built from that song. MicroProse’s resurgence comes from that song as well. Just to give you the background story to it all. But my experience with the military — my dad did two tours of Vietnam. He was a sergeant in the army. He got out of the army in about 1984, after 25 years. I had ties to lots of different military through relatives and things, and as I said, I was set to go into the navy as a clearance diver. That’s what I was going to do. 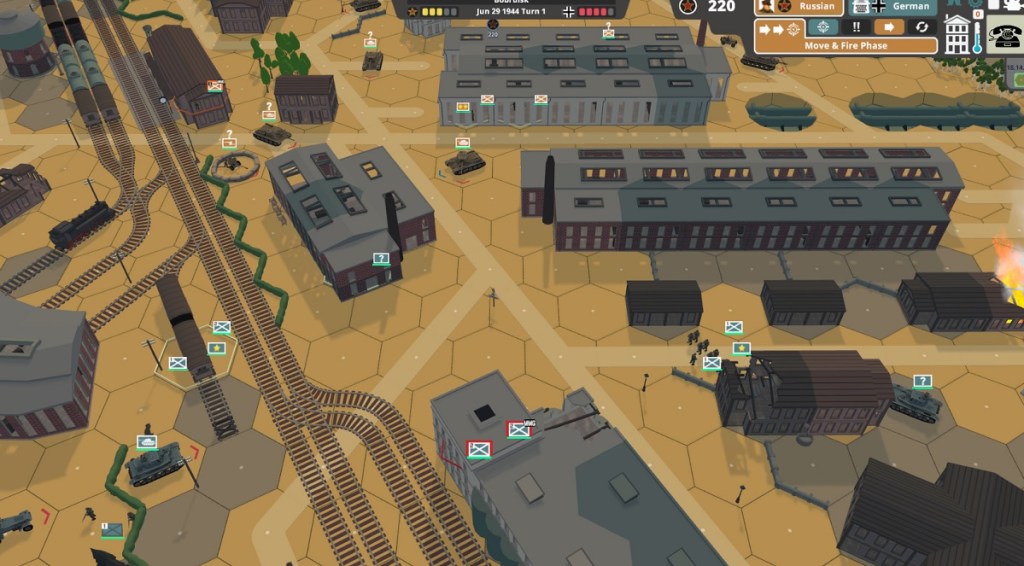 Above: MicroProse’s Second Front is coming from Hexdraw.

GamesBeat: Talking about who you’re working with here, it seems like there’s still talent around that can make these kinds of games. Are you using people who had some kind of history with MicroProse?

Lagettie: Wild Bill and I are talking to one very prominent guy at the moment that we’re looking to do a project with. Not from an opportunistic perspective, but just something we want to build together. We’re all coming together as a common goal to want to achieve this same thing. The amount of people who have worked with MicroProse over the years that I deal with and talk with today is unbelievable. The amount of people who worked there over the whole time since 1982 is amazing. I am working with a few of them now in particular on some projects. They’re projects we’ll announce a bit down the road.

Stealey: We have some of the best playtesters from MicroProse helping out, too.