GamesBeat: Maybe Gilman Louie can make a game for you.

Stealey: Could be? He’s doing pretty well in the venture business right now, though.

Lagettie: He’s got my email address, so …

GamesBeat: There’s a lot of that nostalgia going around. People are interested in making these games.

Lagettie: The reason a lot of these older games are making a resurgence, I think, and not just from the retro side–some of them are just incredibly quality games. If you think back to even a game like Carrier Command, which was put out in 1987 or 1988, if you look at the mechanics of that sort of game, you can see why a game like that, even today, would do quite well. It’s like chess. Even 300 years from now, a game of chess will still be a game of chess, whether it’s a $3,000 chess set or a $10 set from K-Mart. That makes sense.

I think that people are looking back to the past because there was so much more entertainment, and you had to be so much more creative as well. You had limited resources in things like memory and the type of video you had. Some of the games that came out in the days of one floppy drive, it’s amazing what was achieved back then.

Lagettie: We do have internal development. We have a couple of internal teams running at MicroProse today, full steam. There’s plenty of development happening on internal projects, as well as some external, as you know. Some of the developers working on our mil-sim side are actually coming over into MicroProse already. About half the team that developed Titan are working on projects within MicroProse today. There’s lots of things happening.

GamesBeat: What is your focus within MicroProse, David? And Bill, what role are you carving out?

Lagettie: My whole goal is to make sure that these games are produced and published, to make sure that we stay on track. It’s very easy to — I’m getting emails left, right, and center from different types of organizations wanting to do this and do that. I’m quite courteous in saying, “Thank you very much, but my main job is to keep this focused on what we’re doing.” And more important than anything is that we represent MicroProse how it should be represented. We’re the custodians of that brand, and there’s nothing I want to happen to undermine that brand. If we do what we know, what we do best, I think we can keep that legacy going for years to come.

I’m looking very long-term with MicroProse. We’re looking anywhere up to seven years ahead with projects and games. I was doing something very similar to this with the military sims. I designed some of them up to version seven, which included world rendering and all these types of things. That’s exactly what I’m looking for with MicroProse as well. It’s not a short-term thing, not a whim. It’s been in the works for a long time.

Stealey: I’m excited about MicroProse coming back. I’m excited that I got to go to Australia to meet with David and his family. I’m going to help him any way I can, and of course he’s helping iEntertainment put out a new Warbirds. We’re looking at a new graphics system completely. It’s the same kind of thing we did at MicroProse. Doing Warbirds, we’re small. We don’t have a lot of resources. But I’ll help David any way I can. I’ll help him on the finance side, because I know that, having been the CFO of a big company at one time. Anything he needs, I’ll be glad to do it, and my reward will be I get to playtest all the games and criticize them and work it out. 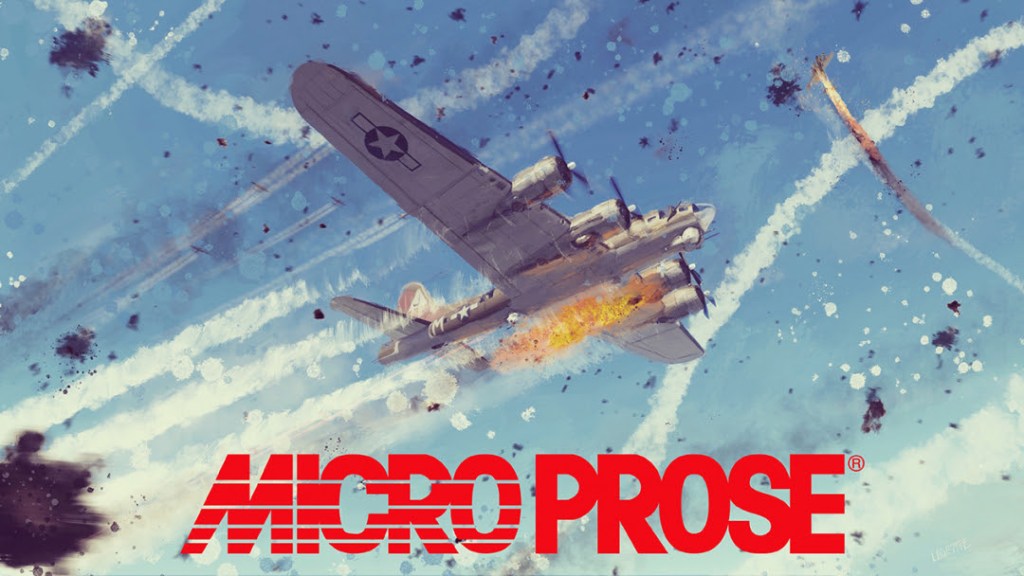 Above: The Mighty Eighth will celebrate the bombers of WWII.

Lagettie: And you do that very well.

Stealey: I try to do it friendly!

GamesBeat: It sounds like very fulfilling work for you guys. I’m glad to see it happen.

Lagettie: It is. It’s definitely not a chore to wake up in the morning to look at what’s developed overnight and what’s happening with what we’re making. It’s incredibly rewarding and exciting. It’s exciting to see some of these games we’re doing.

Some of these teams — again, the original three games we just announced, Second Front, Sea Power, and Task Force Admiral — they’re just incredible games. They really share the vision of MicroProse as well. If you get a chance to see them yourself, you’ll see what I mean. They’re incredibly clever guys to deal with, really nice to deal with. I had a couple of long meetings last night with the Task Force Admiral guys about future projects, and the stuff they’re developing is really exciting. Sea Power is from the creative guy on Cold Waters. To see how that’s evolving and being part of MicroProse, these are things that really excite me. Seeing the new builds and playtesting, I can’t wait until the gamers get their hands on these things.

GamesBeat: On these games, are you thinking about modernizing them, remaking them, or do you think that people will want them the way they were?

Lagettie: There are only so many ways you can make B-17. They’re certainly more innovative. With The Mighty Eighth, you’ll be able to play that in full VR with your teammates. You can have a full multiplayer crew, which is obviously something that couldn’t be done 25 years ago. We’re definitely changing up some of the games. Some of the older games that we’re kind of remaking — we’ll certainly try to preserve what made those games great. We’re not here to totally reinvent those games and hope they do well. We’ll try to honor what made those games great. It’s a fine balance.

It’s a good question, because different games — I can’t even mention a couple of them because they’re yet to be announced, but with one game in particular, it’s quite a famous game. Every second email I get is about it. It will change pretty significantly from the original game. It’ll have full cooperative play. Obviously technology has changed a lot. But we’ll still try to honor what made that game so good. And hopefully we’ll make a lot of people happy seeing that name again.

Lagettie: The other biggest one to note would be Falcon, which is held by Tommo. I’m certainly in talks with those people. But again, we really are looking forward on — it’s great from a nostalgia point of view to go back and remake earlier games, but it’s not my intention to go back and rebuild the majority of those games at all. We might build games that supersede them, or we might call them spiritual successors. If I think it’s right for MicroProse then we’ll go that way. Every second email is about Falcon 5 or this or that. But let’s just see.

DCS has an incredible F-16 simulation. It’s mind-blowing how good they are. Our games with MicroProse, we’ll go down a slightly different route. Like Bill said, flying under the radar, knocking out your targets, coming back and sitting there with your buddies having some beers, that’s what we want to see in MicroProse. You want to get rewarded. You want to know about your wingman and his wife. We want these stories. We want these games to be alive.

Stealey: I do want the bar scene.

Lagettie: You’re going to get that bar scene. It’s getting built. Don’t worry.

Stealey: I don’t know if you ever saw that, but in F-19, if you did badly, you were in the bar all by yourself. If you did well, all the guys would be there partying with you.

GamesBeat: I know there are a bunch of strategy games that have had long legs. There’s all of the Wargaming.net games. They’ve got World of Warships and World of Tanks doing well. What do you think of some of these more modern strategy game successes? Would you want to go there, or do you consider that to be very different territory?

Lagettie: I’ve got full respect for what they’ve produced. It’s very successful. But it’s certainly not the path we’ll go with MicroProse and our games. We’ll try and balance the realism of simulations with — we want people to be able to get into these games and start playing pretty quickly. We want you to be able to get up in the air and start flying, instant action. We’ll have different modes within our games, so if you want to go more hardcore on the simulation side, you can do that. If you want to approach from more of the novice side, we’ll support that as well. But the idea is, you bought that game, and you want to get into the action and get rewarded pretty quick.

Stealey: I agree with that completely. Get in the action, have some fun, but feel that you’re learning something and moving forward. You start as an air cadet, and then all of sudden you’re a second lieutenant. Now you’re a major. Now you’re in control of the whole battlefield. Learn something. Go forward.

Lagettie: The amount of stuff that I learned, even before I started building the military simulations, from the MicroProse games–and other games as well, of course. I was into lots of games. But predominantly MicroProse. You can’t say that side of it didn’t influence what I’m doing today. There are plenty of F-15 pilots out there that actually started flying those aircraft because of the games. Even through M-1 Tank Platoon, I know plenty of people who went into the military to drive tanks through that game.

Stealey: I’ll tell you one story, and then I’ll be off. I was in the Atlanta airport, and I saw a guy in a flight suit. I didn’t know they could travel in flight suits. I left my Air Force hat off and I went over and said, “Major, what are you flying?” He said, “I fly the F-15 Strike Eagle.” I said, “Well, wow, how did you get into that?” He said, “Oh, some guy made a really cool game about it a long time ago, so I decided to go to the Air Force Academy and get in the Strike Eagle.” I handed him my card and he said, “How many beers can I buy you, sir?”

I’ve met people all over the world who enjoyed our games that much, and it gave them a direction in life. I think David’s going to make some great ones, and I’ll be there cheering him on. Of course, I’ll be on the golf course in the morning, but I’ll come back.