If you’re looking for a battle royale between two ambitious, well-funded startups, you might start by visiting India.

The country has become the focus of an intense competition between Silicon Valley’s Uber and homegrown Ola as each seeks to dominate the country’s exploding ride-hailing market. Uber has raised $8.8 billion in venture capital, while Ola has raised $1.8 billion. There are local reports that Ola has raised another $300 million, though the company has declined to confirm that.

But if you think that Ola sounds outgunned, think again. Ola has a two-fold plan to beat back the challenge of the Silicon Valley interloper.

First: Focus exclusively on India, now and forever. And second: Create a unique, personalized riding experienced that can be adapted to the particulars of individuals and the widely varied challenges of a market that is like no other.

Ola’s latest salvo in that strategy was fired last year when it launched Ola Play, an in-vehicle platform to help customize the ride experience. Ankit Jain, head of Ola Play, said this is just the beginning as the company seeks to expand how and why people turn to ridesharing services in the country.

“Ridesharing markets are essentially local,” Jain said. “A cookie cutter approach won’t work. Ola’s service is not just optimized for India, but for each of the cities we serve.”

What happens in this face-off has bigger implications than just which of these two companies emerges victorious. For years, Silicon Valley companies looked toward China, the world’s largest internet market, but often found it impenetrable as they unsuccessfully fought local incumbents and government regulators.

Now, they’re turning their attention to India, which is the world’s second-largest internet and smartphone market but is growing at a faster clip than China on both fronts. While government obstacles for Western companies are significantly lower in India, the question remains as to whether Silicon Valley giants can effectively adapt their global products to suit the needs of the complex India market.

Certainly India took on a much greater significance for Uber after the company pulled the plug on its money-losing China operations. Thus, India became perhaps its next most critical emerging market. Uber has worked hard to put its own regulatory problems in India behind it, along with the fallout from rape allegations against one of its drivers. The company now operates in 29 cities across India. In a city like Delhi, Uber offers six level of service, including UberMoto, which is a ride on a scooter.

By contrast, Ola is in more than 100 cities across India. The company offers 16 different vehicles, including bike taxis and rickshaws. And that’s just one example of how Ola believes it is better able to adapt to its home market, Jain said.

Given the unevenness of the country’s cellular networks, Ola rides can be initiated with an SMS text. And payments can be calculated and paid in cash without an internet connection. The company also has drop boxes around its cities so drivers don’t end up carrying large amounts of cash.

Jain noted that the licensing services for cities and the regions outside cities are different for taxi drivers. Ola has fleets of drivers licensed for both, allowing for both short and long-haul trips. And if a client is taking a longer trip, they can book a service in which the driver simply waits for them over several days and is at their disposal to chauffeur them around and take them back at the end of a trip.

The service has evolved to the point that, Jain said, many of Ola’s drivers have started to become entrepreneurs themselves, buying and creating fleets of cars on the platform. 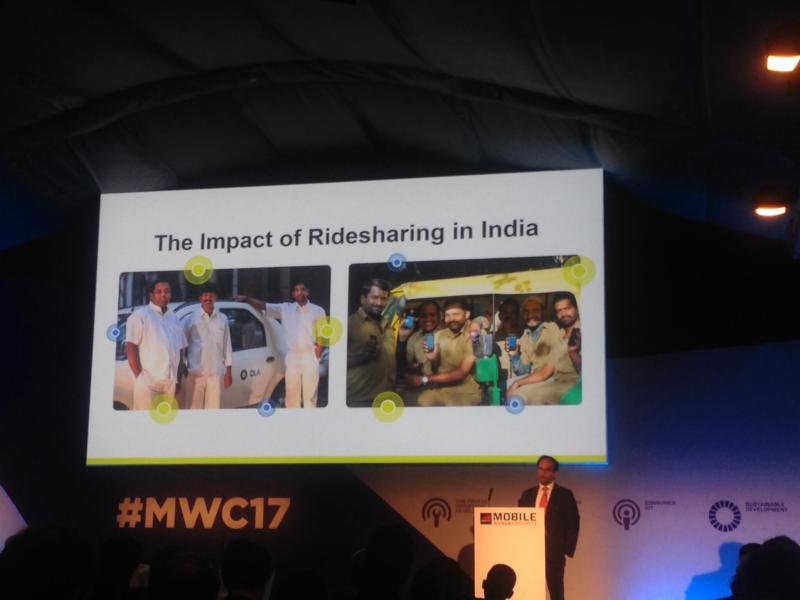 But Ola is not just counting on this home-field advantage to outflank Uber. It’s also busy developing its technology platform to change the entire experience for both riders and drivers.

For instance, the company has built its own mapping service. Jain said many parts of India have no formal address, making most traditional mapping services by third parties not very useful. And its application now offers 20 different languages within India.

More importantly, in November the company launched Ola Play, an in-car platform to let riders customize their experience. Jain said this was a critical step because with distance and traffic, the average ride time is over 45 minutes.

When users sign up with the Ola app, and register the next time they enter an Ola car, the system will recognize the presence of their smartphone for all future rides. Using their phone, or an Android tablet placed on the seat in front of them, riders can choose from a variety of music and video options. Many Ola cars now have Wi-Fi (as do many Uber cars), so the system offers various productivity options for those who want to get work done while in transit.

The system is being rolled out across high-level service Ola Prime, with a goal of having 50,000 cars activated by the end of the month. At the same time, the company is now focused on extending the services available on Ola Play.

“We’re working with a lot of partners to build unique experiences,” Jain said.

Those include a service that lets a rider order a customized tour of a city or region. They could choose an option that would change the ride into a longer tour, with the Ola Play system giving them information about various sites as they drive by them.

The company is working on a video calling service that would let riders schedule conference calls while in the car. There is also a grocery-ordering service in development. A rider would place an order while in the car, and the driver would swing by a store en route to pick up the food, with the whole thing being billed through Ola.

Ola is developing an ecommerce option that connects to inventory of local stores. If someone wants to buy, say, a pair of jeans, Ola Play will show the closest stores with the right sizes and styles to let the rider place an order and pick them up.

Ola Play is also being built for the drivers, Jain said. He points out that the driver, no matter how efficient the system, still has a lot of down time in the vehicle. Ola wants to figure out what services could help them be more productive, such as banking options, buying insurance, or managing other business and personal needs.

“We are trying to figure out how we can make the car as programmable as possible,” Jain said. “Both for the rider and driver. The driver is sitting there for 12 hours each day. It’s his workspace, but it wasn’t really designed to be a workplace.”

Given the size of India’s market, Jain emphasized that the company felt it could go much broader and deeper without having to look at other markets. Unlike Uber, it’s not thinking about autonomous vehicles, given that Ola doesn’t believe the country’s infrastructure in terms of roads and cities will make them suitable anytime soon.

For now, just the growth potential of is core market remains an immense challenge and opportunity.

“Even if you just look at the urban rides in India, it’s not even one percent penetration,” Jain said. “There’s still so much we can do in India, and that’s going to stay our focus.”