When I showed up at the Nvidia booth at the 2018 Consumer Electronics Show (CES), there wasn’t much to see. There was a green race car in the middle and a bunch of people standing around it. I took pictures of the car and was about to move on, but then, I noticed there was no cockpit on the car. I was looking at a Roborace vehicle.

Daniel Simon, the creator of sci-fi cars in Tron: Legacy, designed the green vehicle as the first driverless electric racing car. It weighs 2,204 pounds and is about 15.7 feet long. It has four motors and one big battery, and it can go more than 200 miles per hour. It also has an Nvidia Drive PX2 brain, capable of up to 24 trillion AI operations per second. Soon, it will be upgraded to Xavier, Nvidia’s new AI chip with 9 billion transistors.

Roborace’s creators hope the car could be the foundation of a racing competition among the creators of autonomous car software. In this case, it isn’t always the fastest car that is the best. It’s the one that can avoid pedestrians and other obstacles on a course that isn’t a simple oval, said Rod Chong, chief creative officer, in an interview at CES.

The hardware — the actual car — for the different teams will be the same, and the competition will take place in software. It could lead to better AI, much like early race cars led to the creation of disc brakes, Chong said. Chong, who previously worked on the Project Cars games, said Roborace will also have a gaming angle to it. I also spoke with Bryn Balcombe, chief technology officer at Roborace. 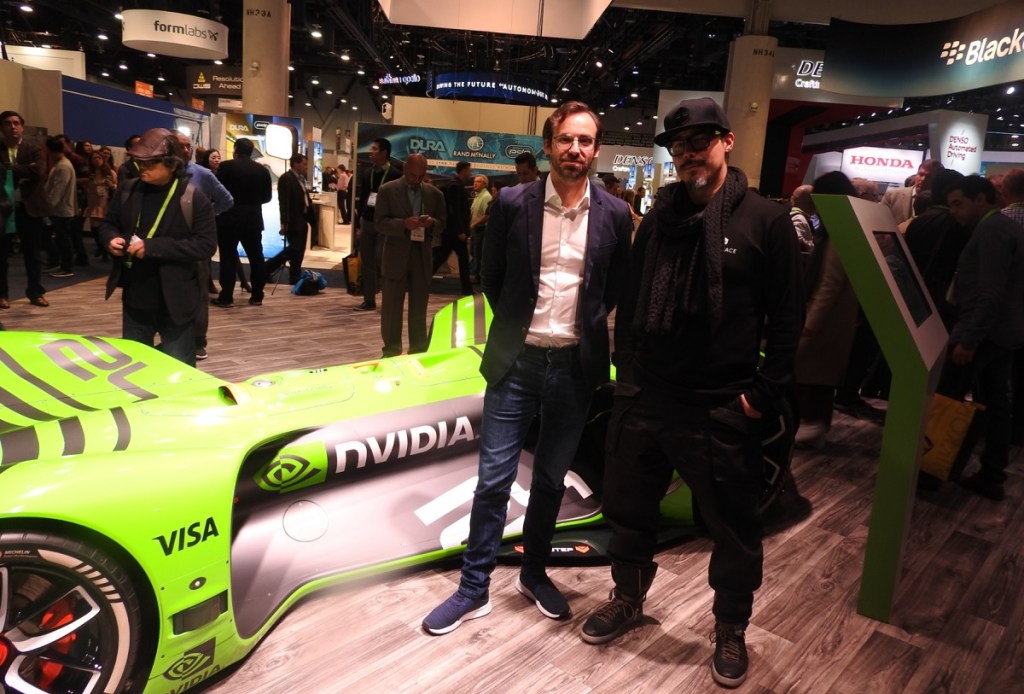 VentureBeat: Tell me what you are doing.

Rod Chong: The Roborace project started about two years ago. Our founder was looking at what could be the next step for motorsport. There’s been a movement in racing toward [electric vehicles], and we can see that a lot of the manufacturers are going that way, but we also need to look for other ways to use racing to push technology forward.

Traditionally, motorsport has always pushed the development of cars. A lot of major milestones in automotive technology have come from racing. In the late ‘50s, Jaguar introduced disc brakes in racing, and there are many more examples. We see now that there’s this mass movement toward intelligent driving and autonomous vehicles. Our aim is to develop a platform, an entertainment event and media platform, that can be used to promote these technologies and push development through competition and challenges.

Our vision for what these cars [are] going to do — they’ll be in forms of competition but something that’s quite new. I’m looking at all aspects of motorsport, but we probably won’t use many traditional forms. What is racing, usually? It’s a field of cars going around in a loop, and after a certain distance, the first one over the finish line wins. We want to make sure what we’re doing is road relevant, though. We’re going to have obstacle vehicles on track when the cars are driving. Obstacle avoidance will be a thing. In real-world conditions, that’s an important technology that participating companies will have to develop.

VB: You could put pedestrians out there on the track.

Chong: We could have automated or autonomous obstacles to mimic that kind of thing, yeah. The cars will challenge each other through that. But also want to have augmented reality elements. We’re designing something that looks more like a video game, almost. Those elements are part of the competition. It might be that the car can see an AR obstacle or AR vehicle. If you’re watching it, maybe you can see those virtual elements in a broadcast, or maybe, we have a gaming element happening live at the same time. But the car can see that and respond to it.

We have another car that has a cockpit, unlike this car here, the Robocar. That car can have a human driver. We’re going to play with the interaction and the learning that AI can pick up from drivers. It may be that in the future, we’ll have several teams. One of the cars will have a cockpit with a professional driver, and then, we’ll have two of these Robocars that have to learn from the driver. There’ll be a collaboration happening. But we still have to design all these elements.

VB: Is this electric?

Chong: Yeah, this is electric. But our ultimate aim is to save lives. Hopefully, through pushing the technology, we can improve the living conditions in cities.

VB: It’s kind of like a more entertaining DARPA challenge.

Chong: Yeah, where the cars are going really, really quickly.

VB: How far along is this? What happens next?

Chong: Right now, we’re doing the final elements of engineering. This is a display model. The car’s been running since last year, but we have to develop it, so it can go at high speed and be very reliable. We’re doing some cooling changes on the bodywork. By the end of May or early June, we’ll be finishing the engineering on this. We’re not ready to talk about a race schedule yet.

VB: How much work has gone into the car so far?

Chong: About a year and a half.

VB: Are other companies going to be building their own cars?

Chong: Right now, the basic premise is that we provide the hardware platform so that the different groups coming in can provide the driving-intelligence layer. The hardware is all equal, and then, competition comes in with the software. We’re calling it a championship of intelligence, a competition between software engineers.

Chong: Yeah, they could.

VB: What was interesting enough about this for you to change jobs?

Chong: To me, it’s a positive contribution. It’s hard to resist. You just look at the car. I get to work with this thing? It’s amazing. I view it more as a robot that happens to have wheels than a car, really.

VB: Do you think there are lessons to draw from video games here?

Chong: Oh, yeah. My entire history of working in games, I’m going to apply all that to the competition formats.

Chong: There are many different ways we can play this. You could have a multiplayer league between AI systems, autonomous driving systems, doing multiplayer simulation gaming together. They’re learning how to race. That could be exciting.

VB: There’s less risk for humans here, too. You can go crazy with the hardware.

Chong: If you look at motorsport, different famous race series, often the fastest laps are from 20 years ago. They’re trying to slow the cars down, adding limitations. You could build a car so fast that a human driver would pass out or die because it’s too much to handle. We can do things with these cars because we don’t have to think about the safety of the driver. We could make it insanely fast or do things that are just crazy. We’re thinking of trying things where two cars are running opposite ways around a track. Or just having traffic on a racing track. Normally, that’s not done at all.

VB: Putting in obstacles, it becomes about learning how to navigate [them] instead of just going the fastest.

Chong: It’s going to be exciting. If you have 10 autonomous delivery vans crawling around a track, and then, a pack of these racers flashing past them, that’s going to be very exciting to watch.

VB: And if you crash them, it’s not as big a deal.

Chong: Ultimately, what we’re striving for is that doesn’t happen. The sensors on the car and the autonomous driving systems are able to predict what’s going to happen. But it’s through the competition that those systems are learning. The goal is to push forward for the sake of safety.

VB: And you could make a video game spinning off from it. 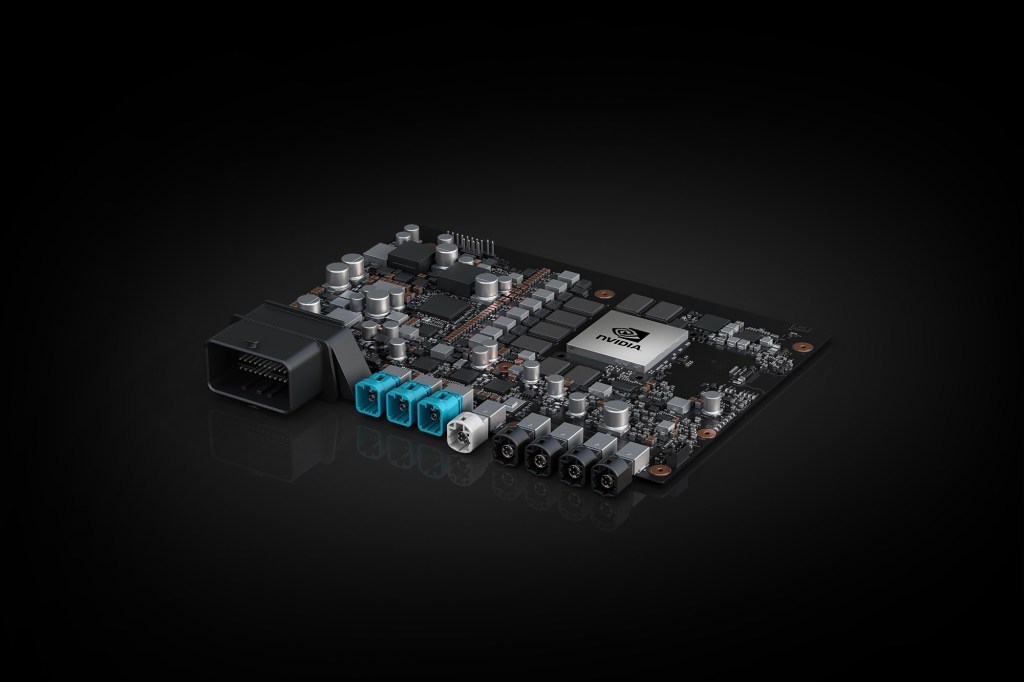 Above: Nvidia’s new Xavier system on a chip.

VB: Are these logos actual sponsors yet?

Chong: These are just people we’ve had discussions with so far. The main collaborator is Nvidia. We use their hardware and technology, the Drive PX2. We’ve announced that we’re moving to the Drive Pegasus platform in the summer with the Xavier. That opens up completely new competition formats for us. You end up with a much more intelligent platform. I often describe traditional motorsport as being a level-two automation problem, lane keeping and adaptive cruise control. This enables up to pitch toward a level-four or level-five competition, where we can have these cars on track racing through a traffic environment.

VB: Is it more power efficient as well?

Chong: We’re not really worried about power consumption. We just want to know how much compute power we have to drive the intelligence in the software. That’s what’s critical. Moving to Pegasus gives us that.

VB: What else can you say about the design so far? Why does it look this way? Why would you build a self-driving race car to look like this?

Bryn Balcombe: The first design decision was, no human cockpit. It’s a provocative move in the market. It says, “This car can drive itself.” There’s no confusion. When you look at this, there’s no mistaking that you can’t have a human in this car. That’s the first thing. And then, when you look at the design, you can manipulate the aerodynamics in new ways because you don’t have space taken up by that human pilot. You don’t have to build airflow around them. The radiator ducts go in, and the radiator sits where the pilot would normally sit.