This morning, San Francisco Mayor Ed Lee is unveiling a new “entrepreneur-in-residence” program in collaboration with the White House to bring the innovative energy of startups to bear on a massive underserved market: the $142 billion public sector.

What can startups do for big city, state, and federal bureaucracies?

In other words, it’s less about an app for one person and more about apps for major systems that affect many, many people. 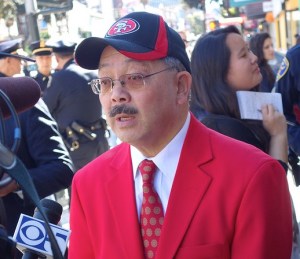 Essentially, the program is like a mini-accelerator, with mentorship offered throughout the 16-week program from top public officials as well as key private sector technology veterans.

Why in San Francisco?

“The people here in Silicon Valley are the smartest people working at the most innovative companies in the world,” a spokesperson from the mayor’s office said this morning. “We want to pull those people into fixing problems, using the skills they have … to help the big mass of people who aren’t in the private sector.”

“Government … is by far the largest customer of products and services in the nation,” Nath said in a statement. “The entrepreneurial products and services developed through San Francisco’s EIR program should drive significant impact such as increased revenue, enhanced productivity or meaningful cost savings.”

There is no investment or equity stake in this new government “accelerator” program, but participants will get “direct access” to government staff and government needs as well as product development and ramp-up support. Most of that will be within the city of San Francisco, but solutions derived here will be applicable elsewhere, according to one private sector adviser to the program.

“Products and services that successfully solve issues faced by San Francisco can easily expand to addressing similar needs of other cities and states across the nation in addition to the private sector,” said Rahul Mewawalla, who has been an executive for Nokia, NBC, GE, Comcast, and Yahoo.

Three to five teams will be chosen, and the program will run from mid-October to February 2014. Interested companies and founders can apply at San Francisco “mayor’s office” website.