For all the turbulent developments in the tech world this year, the impact of SoftBank’s massive investment fund may loom largest over the startup world in years to come.

Back in May, SoftBank CEO Masayoshi Son announced that the fund had closed on $93 billion of its planned $100 billion fund. Announced the previous year, the publicly known investors in the fund include Apple, Qualcomm, and Foxconn.

During an appearance earlier this year at Mobile World Congress, Son explained the rationale for the fund as an attempt to place big bets on companies that would help him prepare for the moment when machines become smarter than humans. In advance of the “singularity,” he needed to be involved with a wide range of technologies that could offer data and insight into the rapidly evolving world.

A new report from CB Insights reveals the massive impact the Softbank Vision Fund had on venture capital in the U.S. in 2017. According to the report, SoftBank invested in 16 deals in the U.S. this year. Worth noting is that the report was published before SoftBank announced on December 19 that it had led a $120 million round in New York-based AI insurance startup Lemonade. 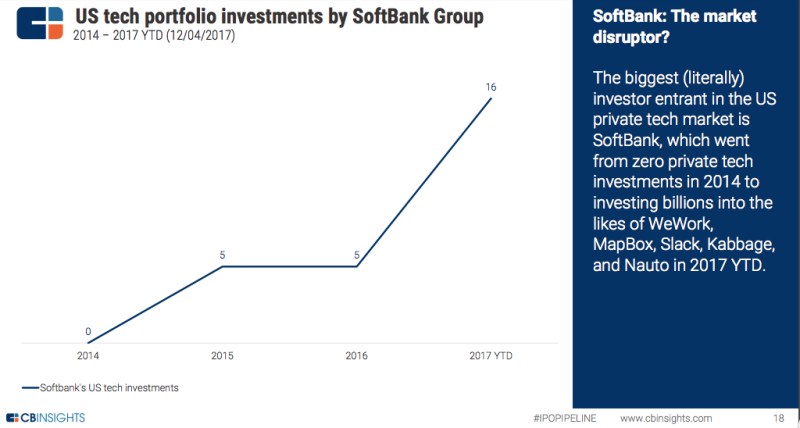 It wasn’t just the number of deals that was notable, but their size. According to CB Insights, SoftBank’s fingerprints were all over many of the biggest funding rounds: 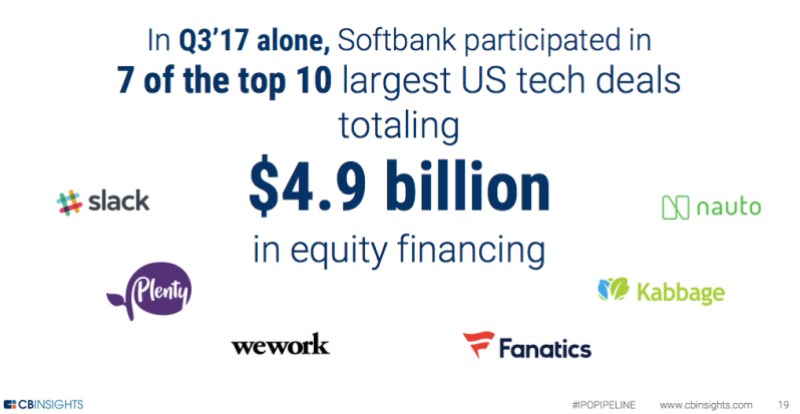 And these numbers don’t include deals such as the current negotiation to buy a sizable chunk of Uber’s stock, a controversial deal that has split the company’s executive leadership and board. SoftBank has reportedly bid to buy shares from insiders at a valuation of $48 billion, well below the company’s last reported valuation of $70 billion. Such a drop could add to the negative cloud surrounding Uber as it struggles to repair its reputation after a disastrous year.

At the same time, SoftBank just announced it has led its second round of funding in China’s Didi Chuxing this year, a $4 billion round that pegs the Uber rival at a valuation of $56 billion.

Indeed, while the CB Insights report focused on the U.S. market, many of SoftBank’s biggest bets were elsewhere. They include leading a $502 million investment in London-based virtual reality startup Improbable Worlds last May and a $1.4 billion investment in Paytm, the digital-payments startup based in India.

Of course, these big bets come on the tail end of an era that has led observers to caution that too many startups are already overvalued. Other VCs have been carping that SoftBank is driving valuations up even further with such large bets. And CB Insights cited SoftBank’s large checks as a factor that is keeping a lid on the tech IPO market.

Given the long horizon that Son claims he has, it could be many years before we know for sure whether such wide-ranging bets gel into some kind of cohesive whole, or whether these investments are justified by the eventual returns produced by individual companies.

But for the next couple of years, it would seem that SoftBank has the artillery and the reserves to grab just about any deal it wants. And Son is carving out a legacy as this decade’s high-tech wild man. We’ll see whether he’s remembered as a fool or a prophet.