LAS VEGAS — As one of biggest hardware companies at this week’s 2014 International CES trade show, Sony had a huge opportunity to show off new products, but it kicked off today’s press event touting its commitment to ultra high-def video content.

“This year is all about play,” said Sony Entertainment president Mike Fasulo during the company’s press event today in reference to the main theme for CES.

Sony already launched its 4K digital video store late last year, which now has over 140 movies and TV shows. But making more titles available is really only one step on the long road to ensuring 4K video gains enough popularity to become a serious trend. 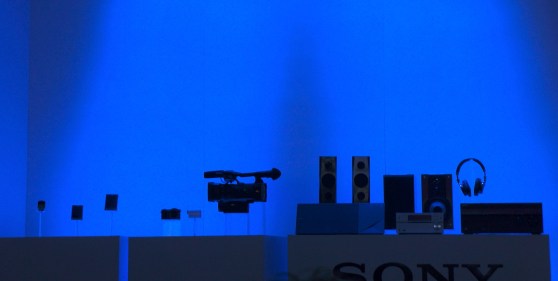 Above: A table showcasing Sony’s new products just prior to its press event at CES 2014.

So how will Sony do this? Well, its strategy is actually pretty sound. Sony owns a film studio, which means several upcoming major movies are being shot in the ultra high-def format. It’s also releasing a new line of cameras and camcorders with 4K recording capability. It’s also debuting nine models of new Bravio 4K television sets.

And as is today’s theme with all major 4K announcements at CES, Fasulo welcomed Netflix CEO Reed Hastings on stage to chat about making sure 4K content would be available on the streaming service.

Fasulo smartly got Hastings to address one of the major issues of streaming 4K video: bandwidth. Hastings said that Netflix will be able to play the ultra high-res format reliably with an Internet connection speed of 15mbps.