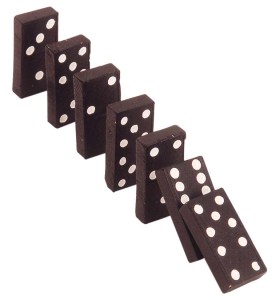 This week, we’ve seen one of the biggest dominoes topple in the annals of financial history. It was triggered by the failure of Congress to cut a bailout deal and the resulting collapse in the stock market. The Dow fell 7 percent in its worst day in a decade and the tech-heavy Nasdaq fell 9 percent.

Today, the stock markets recovered. But the blow to investor confidence has been registered. Comparisons to the Great Depression are plentiful. I think we can assume that even if a bailout bill gets passed, the economy is going to be hurting for some time. Given that, we can make some predictions about what’s in store for tech companies and VCs.

The economy is on life support. Banks have stopped lending. Big private equity deals that depended on bank financing are drying up. Consumers aren’t buying homes. The IPO market is more shut than ever. People are looking around for safe havens. Those havens were supposed to be in overseas markets, but banks are starting to fail around the world. The intertwined world economy could get dragged down by the U.S. The question arises, whether you are big or small: How long do you fight these trends? When do you retreat? What do you do next?

As the banks shut off lending, the effect is like damming a river. Downstream, the private equity firms won’t get commitments for big buyout deals, which were engineered only with the financial clout of banks. Venture funds won’t be able to get limited partners pouring money into their next funds. A shake-out will start to happen, gradually but at a quicker pace than before, among the VCs. Those with newly raised money will outlast the ones who can’t raise new funds because of weak returns. The supply of money to start-ups will be smaller. Fewer companies will get funding. Companies will stretch out their plans and will buy less tech gear. That, in turn, will hurt the big companies such as Microsoft, Intel, and Hewlett-Packard. They, in turn, will buy fewer start-ups. That’s bad because M&A accounts for more than 95 percent of VC exits.

Quarterly sales of IT equipment to financial companies will likely fall off a cliff. For some companies, the financial sector is a big buyer, so tech companies may pre-announce lousy quarters, forcing stocks even lower. Microsoft CEO Steve Ballmer said today that the downturn will likely affect his company’s sales. Consumer demand will dry up as workers lose their jobs or their homes. Big companies will pull back from their own investments in start-ups. They will stop taking out ads, further hurting the fledgling companies who are experimenting with ad-based revenue models. Risk taking will cease. You could say this might be a cleansing fire that makes the quality start-ups stand out. Jason Calacanis has suggested in his post dubbed “start-up depression” that 50 percent to 80 percent of current start-ups may fail. The strong ones who survive will be those that rely on old-fashioned revenues, he argues.

Maybe Calacanis’ prediction is unwarranted. Mark Heesen, president of the National Venture Capital Association, says there is a crisis for the industry in the lack of IPOs. But he doesn’t think that half of all start-ups are going to go under. Granted, he says it’s imperative that a bailout bill passes and he notes that it’s hard to predict the future. But he believes there are plenty of angels who will continue to finance big ideas among the seed-stage companies. And while a VC shake-out will pick up pace, pundits have been predicting it will happen since 2000. The reality is that the death of a VC happens over a fairly long period of time.

Fred Wilson, a partner at Union Square Ventures, also says the start-up attrition won’t be as bad as Calacanis predicts. He says that venture-backed companies will still receive funding from the VCs that backed them. That was the pattern he saw in 2000 to 2003, when VCs had to use their “dry powder” to keep start-ups going with extra rounds of funding. And he notes that many seed stage companies are just getting started. They will surface with products a few years from now, after the financial crisis has ended. This logic invokes the old saw about how seed-stage companies can “fly over the storm.” Wilson still recommends that companies cut unnecessary costs and bulk up on capital. But he believes the start-ups will keep going and that we are in a down cycle, not a depression.

The course for start-ups is complex. You have to batten down the hatches but still attempt to grow. A certain kind of sales pitch works better in this environment. If you can position your products or services as a necessity instead of a luxury in this environment, you can succeed, said Avi Basu, chief executive of New York-based Connectiva Systems. His company helps telecom carriers fight fraud and billing problems, helping to recover lost revenues. As such, telecom carriers might see the investment in Connectiva’s software as a way to boost the bottom line during a recession, despite the initial expense.

But at some point, Basu acknowledges (based on his survival of the last nuclear winter), even these kinds of strategies fail. You can cruise along at neutral during a down business cycle and expect to emerge stronger during the up cycle. You can spend more heavily if you want to gain market share during the bad times. But during a Depression or a “nuclear winter,” you have to change course and just try to survive.

At some point, if the downturn lasts long enough, everyone will be driving on fumes. VC firms that collapse won’t be saving dry powder for their start-ups. In the long term, it’s hard to see how the IPO market will get off the ground again. The boutique tech investment banks aren’t there to restore the IPOs anymore, said Mark Jensen, the partner in charge of venture capital services at Deloitte & Touche. That raises the question, who will save tech? Silicon Valley didn’t truly recover from the nuclear winter of 2001 to 2003 until Google went public in 2004. Who’s stepping up to the plate next? It probably won’t be Facebook, which is dependent on ad money that is rapidly drying up.

The valley needs another PayPal, which was one of the last pre-bust IPOs that created a lot of millionaires with money to invest in the next generation of start-ups. The Web 2.0 crowd revived Silicon Valley.  And Web 2.0 was started by serial entrepreneurs, which included the founders of Friendster, MySpace, Tribe, and the PayPal mafia.  The latter included characters such as Reid Hoffman, who started Linkedin; Peter Thiel, who funded Facebook; and Max Levchin, who started Slide. Then there were the Google IPO millionaires of 2004, who not only drove up housing prices in Silicon Valley but also took their riches and started new companies. It was these people, newly wealthy and full of ambitious plans, who started the valley on its recovery path. They all discovered the power of user-generated enthusiasm. They created the wave of usage that has made so many more start-ups possible. They got the optimism engine running again, creating jobs and letting people bide their time until the next great idea came along.

The severe part of the downturn may only be starting now. If Congress acts quickly, then perhaps it may feel like the downturn could be shorter. But it’s easy to get dragged down by the falling dominoes. There are fundamental weaknesses in the system, thanks to burdens such as high oil prices, the Iraq war, a crumbling healthcare system, and other bailouts in the offing.

It’s hard to see to the end of the chain reaction. It will come. We’ll hit a bottom, maybe a year or two from the point of the biggest domino’s fall — the point that Jensen calls the capitulation. Then we’ll begin the long, hard slog. I sure hope there is a marquee company that makes it all turn around faster. I don’t expect it to be one of the big companies. I’m almost certain it will be a start-up. Silicon Valley has always produced such companies. Innovation is the only thing that can sprout a new ecosystem after the fire.