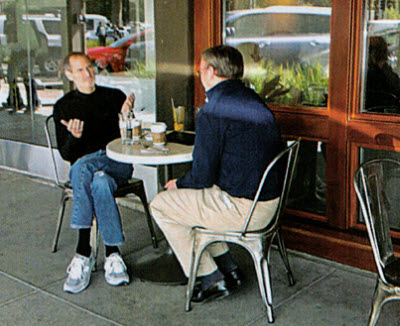 Steve Jobs and Eric Schmidt had a bitter falling out with each other over Google’s creation of its Android mobile operating system, which Jobs felt was a grand betrayal.

Schmidt was a member of Apple’s board from 2006 to 2009. But the two companies began to compete with each other, at first without knowing it, when Apple launched the iPhone in 2007. The story was captured in Walter Isaacson’s biography of Jobs, which will be officially released Monday but has been leaked to the New York Times and the Associated Press.

The AP said the that Schmidt quit Apple’s boadr as Google and Apple went head-to-head in smartphones. Jobs was livid in January, 2010, when HTC introduced an Android phone that boasted many of the popular features of the iPhone. One of those was a “multitouch” screen where multiple fingers could be registered on a touchscreen. Google’s first Android phone did not have such a touchscreen.

Jobs said, “I will spend my last dying breath if I need to, and I will spend every penny of Apple’s $40 billion in the bank, to right this wrong. I’m going to destroy Android, because it’s a stolen product. I’m willing to go thermonuclear war on this.” At a cafe in Palo Alto, Calif., (where the two men were photographed), Jobs told Schmidt he was not interested in settling the lawsuit.

“I don’t want your money. If you offer me $5 billion, I won’t want it. I’ve got plenty of money. I want you to stop using our ideas in Android, that’s all I want.”

Schmidt, meanwhile, denied that there was discord with Jobs.

“We understood it was a possibility when I joined the board,” he said of the business conflicts. “We had adult conversations about it at the beginning and the end.

“All those reports in the press were wrong,” he added. “After I left the board, they had me to events and to private dinners.”

Jobs died of cancer on Oct. 5.