Streamlabs is out to make the Leisure Economy, where people get paid to play games, into a reality. It does so by enabling viewers to leave tips for livestreamers that they like on platforms such as Twitch, Mixer, and YouTube.

Those tips can supplement advertising revenue, and they have become a big part of streamer income. Ali Moiz, CEO of Streamlabs, said that his company processed more than $275 million in tips since 2014, with $145 million expected this year. I talked to Moiz at the Streamlabs event this week in San Francisco, where Moiz announced that the company is creating an app store for developers who write applications on top of Streamlabs’ software, which provides a variety of functions for streamers.

Moiz said that Streamlabs will have 10 developers on its store at the outset, and it will invest $1 million in a number of developers who embrace the app store. Streamlabs also announced partnerships with Nvidia and Intel to help spread its platform across more devices. 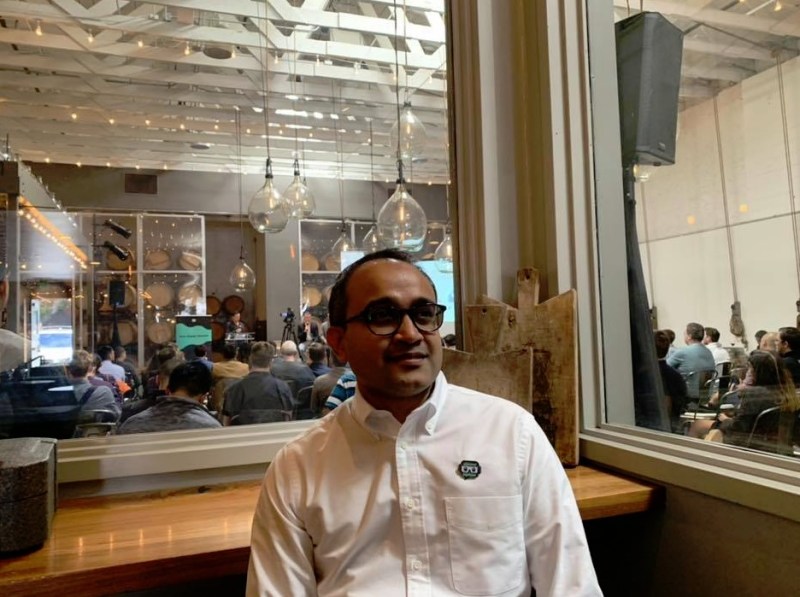 Above: Ali Moiz is CEO of Streamlabs.

GamesBeat: You had some news today.

Ali Moiz: [laughs] You can see our progress on a number of metrics. We paid out $275 million in tipping this year. Our brand new streaming software, Streamlabs OBS, went into open beta in January. It finished in September, after nine months, at about 40 percent of Twitch’s market share. That’s pretty insane given it’s a mature market. We think it’s the fastest-growing software in live streaming ever.

We also looked at monthly active user (MAU) numbers. Streamlabs has increased by four times over the last two years in the number of channels our streamers or broadcasters are running. We have our partnership with Nvidia around improving the NVENC encoder. Core backend stuff that improves streaming quality, and also enables hardware-based encoders over software-based encoders. Nvidia shared some stats where the hardware-based encoders outperform software with about a 40 percent gain.

Also, we’re partnering with Intel. The GM of their entire consumer group was here with their team. We’re putting together a custom device, which is going to be a custom, made-to-form PC for live streaming. Intel has designed the architecture, the chips, and the encoders. Our streaming software is optimized for it. It will be loaded onto the PC by default. Several hardware partners and OEMs are manufacturing this device. 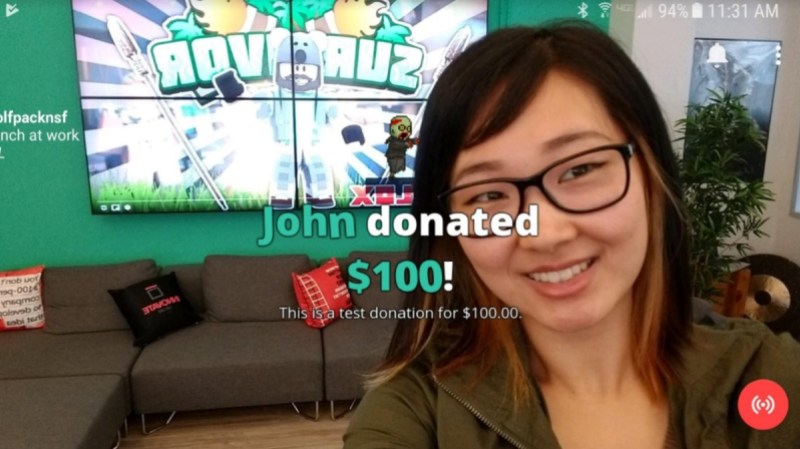 Above: Streamlabs enables streamers to make money from tips.

GamesBeat: What makes that important for you?

Moiz: It’s the first instance of hardware and software working together to make streaming easier. Before this, all the hardware was general-purpose. You buy a PC off the shelf, put software on it, and hope it works. Drivers can break. Software doesn’t work with some OS versions. You have something else incompatible installed. Your GPU’s not good enough, or you don’t have enough RAM. Other things can go wrong. It makes streaming easier.

For Streamlabs it’s also the first instance of partnering with someone like Intel and getting access to distribution through their network of OEMs, global retail, global marketing. For Intel it’s a way to get the best live streaming software on the market on their devices in a way that’s customized for them. It makes their device more special and more performant than a general-purpose PC.

For the streamer, as well, it allows easier access to getting into streaming, having the software immediately available. I grew up in the ‘90s. You remember those computers that said Intel Inside, the sticker? We also announced that these devices will have a Streamlabs badge on the outside, “Go Live Streamlabs.” That’s pretty cool.

GamesBeat: You also had an announcement about your new app store?

Moiz: That’s probably our largest announcement today. We took our Streamlabs broadcasting software, Streamlabs OBS, and we’re building an app store into the software itself. This is a desktop piece of software that sits on your machine. We’re putting an app platform in there where developers can write native apps that sit inside the software, and they can sell those apps to streamers, who can choose to pay and upgrade for unique experiences, for cool things that they didn’t have access to before.

We have about 10 launch partners. Four of them were up on stage today: Layer One, Monstercat — which is a big indie music label — Overstream, and Mobcrush. We also announced a $1 million developer fund that we’ll use to invest and support these developers. 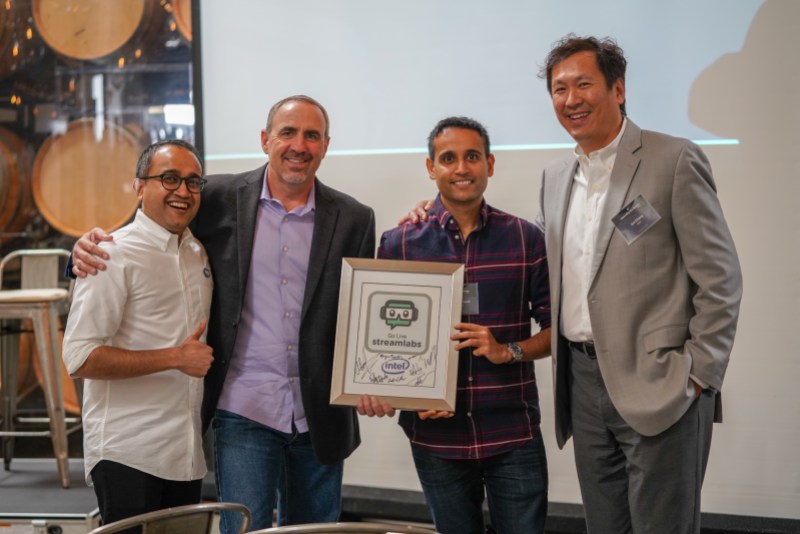 GamesBeat: What kind of apps are they building?

Moiz: Think iOS and Android, but more B-to-B focused, so maybe Salesforce is a better comparison. You’re building apps for streamers. As a developer you’re able to build an app that, say, helps you monetize better than your standard options. How you run your contests, better leaderboards, better ways to showcase your biggest donors so they spend more money. You can surface this ap in front of 1.5 million monthly active streamers that use Streamlabs. A million of them are on Streamlabs OBS today.

If you think about reach and distribution, this is a million YouTube or Twitch channels that a developer can now reach directly. The terms are pretty favorable. It’s a 70-30 rev share. This is going live next month.

GamesBeat: How did you figure out how to make money for yourselves here, while you’re also generating money for streamers?

Moiz: One of our revenue streams — we’ve had it for years — is just selling virtual goods experiences to tippers who spend money. They can spend extra to get emotes on screen, to get their names to show up brighter and blingier. But as part of this app store, a new revenue stream for us will also be keeping that rev share on the money spent through the app store. We have 15 apps today, and as this grows it will hopefully become a big part of our overall business. This is going to be a significant recurring SAS revenue stream.

What nobody’s been able to do yet at scale in this industry is get streamers to pay for better tools. There have been one-off cases here and there — a few hundred streamers, maybe. Great products exist and streamers are paying for them today. They just don’t have easy distribution. All of our launch partners, none of them are brand new. They all have products in the market today. They all have paying customers. They all have cult followings that are passionate about those products. We’re saying, “You’ve proven your product has a market. Let’s get you in front of millions of streamers.”

GamesBeat: Are you going after all the streaming platforms, outside of Twitch?

Moiz: Short answer is yes. Roughly half of our usage is outside of Twitch, between YouTube, Facebook Live, Twitter, Periscope, and Mixer. Those are the other major platforms outside of China. We work with all of them. We don’t work with the Chinese platforms today.

GamesBeat: With all of the users and money flowing through your platform, what are you learning about streamers and about who’s spending money to support them?

Moiz: Some interesting stats we’ve seen recently: last year was the first year where the minutes watched on live streaming in China, the sum of all live streaming apps for the year, was more than the sum of all the minutes watched on TV. Local, cable, and satellite TV. The smart money has always said, especially in mobile gaming, that if it’s happening in China, it will find a place in the rest of the world.

In terms of tipping and spending patterns, we’ve seen average spending by a fan go up four times over a two-year period. It’s in one of our quarterly reports. The first quarter they spent about $20. That same user, if they stayed in the ecosystem, the third or fourth year in they’re spending $80-100 per quarter. That’s insane. If the number of users stays the same, if they don’t leave, the spending still goes up four times. The longer they stay, the more they trust the system and the more they spend.