Five days ago, Hurricane Harvey slammed into the Texas coast and lingered for days to become a storm without precedent in U.S. history, delivering a record 52 inches of rain in some places, with 8,500 rescues to date by the National Guard, 32,000 in shelters, and a death toll of more than 30 people.

Harvey has since been downgraded to a tropical storm, but many areas are still dealing with devastating floods. In the wake of these events, there has been an outpouring of volunteer efforts and donations to relief charities. Among those coming together to aid victims of Harvey are the tech companies that have made donations and assisted in fundraising. Here is how some tech companies have been helping, as of Wednesday.

Google says it has raised $2 million for hurricane relief so far and has matched the first $1 million with its own donation from Google.org. On Google’s site, searching “Hurricane Harvey” brings up a page of results, including alerts, stories, updates from the National Weather Service, resources for help, and an interactive Google Map of evacuation resources. Facebook has said it will match up to $1 million in relief funds raised by its users through the social network. The company set up a donation page for the Center for Disaster Philanthropy for those who opt not to donate to the Red Cross. (Update: CEO Mark Zuckerberg said Thursday that Facebook and its users raised $10 million. Now the company is donating $1 million in relief for other floods in South Asia.)

Microsoft said it contributed $2.5 million in cash, technology, and services to support relief efforts and help nonprofits, while matching $100,000 in donations from its employees. The assistance is intended for immediate aid as well as long-term recovery.

Verizon pledged $10 million for relief efforts, working with local officials to identify four nonprofits to support. The carrier also said it would relieve postpaid customers of some call and data charges, while giving prepaid customers an extra 3GB of data through September 15.

AT&T also waived charges in affected areas through September 15 and offered credits to some customers. The company pledged $350,000 to local communities.

Airbnb used its platform to allow hosts to open their homes for free to those needing shelter after the hurricane. The site and app feature a list of available residences in cities like San Antonio, Dallas, and Austin. Airbnb is waiving any fees for these charitable listings through September 25. 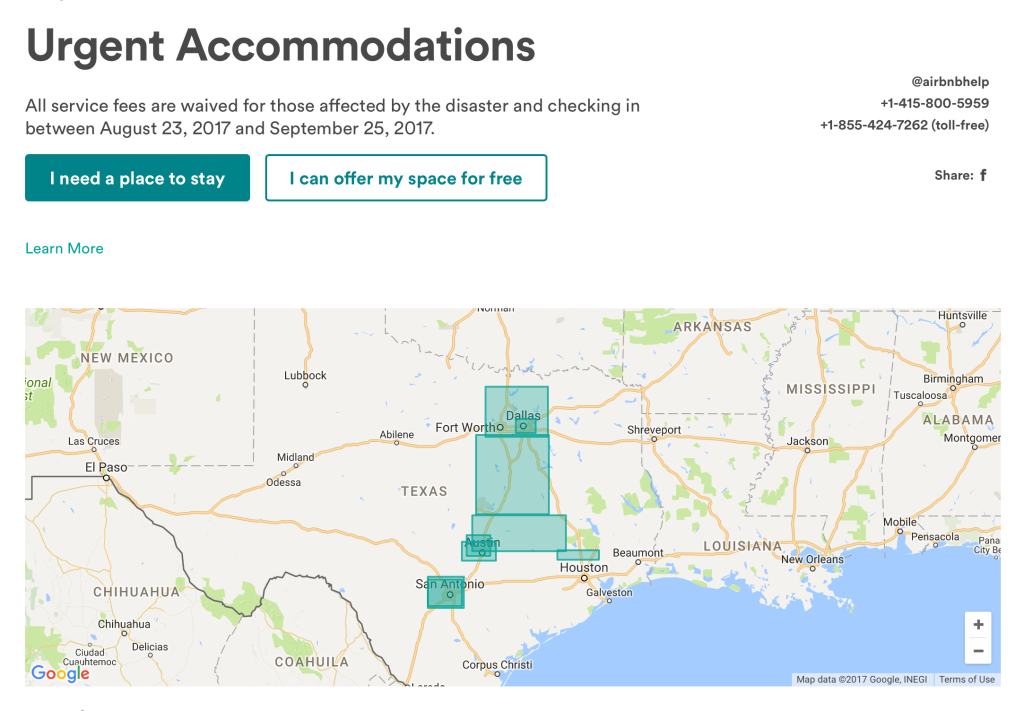 Disney made a $1 million cash commitment to the Red Cross and said its ABC television unit will hold a “Day of Giving” benefit on Thursday to raise more money.

Amazon and Whole Foods are matching $1 million in donations to the Red Cross made through Amazon Pay, as well as setting up a wish list of essential tools and supplies for the Red Cross. The company said it’s also pulling critically needed items from its inventory to donate directly to first responders and using AWS to help nonprofits adapt their apps for disaster relief.

Apple CEO Tim Cook tweeted out a link to a feature in iTunes and the iOS App Store that allows Apple’s customers to make donations of between $5 and $200 to the Red Cross. Apple said it will transfer 100 percent of donations and will not share personal information with the Red Cross.

Prayers for Texas and all those affected by #HurricaneHarvey. Join us in the relief effort by donating: https://t.co/QLBMFOjaDG

Lyft donated $100,000 to the Hurricane Harvey Relief Fund and made rider donations to the Red Cross available through the Round Up & Donate feature.

Walmart and its Walmart Foundation committed to at least $1 million in support, with local teams offering their own assistance. The retailer set up a pharmacy inside the Dallas Convention Center and sent some of its trucks to deliver supplies to a Houston Conference Center. Target and other retailers have offered donations as well.