In case you missed the memo, Donald Trump has claimed victory in the U.S. presidential election today. Technology industry figureheads have been weighing in with their thoughts, and financial markets have begun reacting to the news.

Technology played a critical role in the Trump vs. Clinton campaign cycle, but Trump hasn’t spoken all that much about technology in the past. So, for the most part, all the tech industry has to go on are Trump’s remarks on everything from Mexicans and Muslims to the rape allegations against him to Russian president Vladimir Putin.

“Congratulations to President-elect Donald Trump. He has an awesomely difficult task, since it is long past time for us to face up to our country’s problems. We’re going to need all hands on deck.”

And myriad investors, founders, executives, and journalists have been chiming in on Twitter over the past day, with a common sentiment emerging: everyone must come together.

Hyperloop One cofounder Shervin Pisheva reckons independence for California is the only solution, and former Facebooker, investor, and Path cofounder Dave Morin agreed.

@shervin I was literally just going to tweet this. I'm in and will partner with you on it.

Pisheva is dead serious about this, too, in case you were wondering.

Without specific reference to Donald Trump, who has publicly lambasted Apple over the past year, Apple CEO Tim Cook said that “the only way to move forward is to move forward together.” He added:

While there is discussion today about uncertainties ahead, you can be confident that Apple’s North Star hasn’t changed. Our products connect people everywhere, and they provide the tools for our customers to do great things to improve their lives and the world at large. Our company is open to all, and we celebrate the diversity of our team here in the United States and around the world — regardless of what they look like, where they come from, how they worship or who they love.

Facebook cofounder and CEO Mark Zuckerberg also passed comment, though he took a middle-ground with his verdict, noting that to create the world we want for our children will require a lot of work — work that is “bigger thany any presidency.” 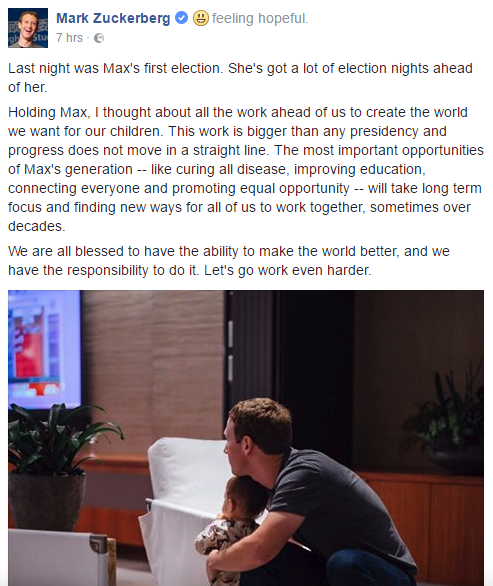 Above: Zuck on Election

Googler and investor Adam Singer is pessimistic about the outlook for Silicon Valley.

Dara Khosrowshahi, the Iranian-American businessman and CEO of Expedia, was somewhat matter-of-fact about the outcome, noting that the tech industry is “disconnected” from the nation as a whole.

As tech leaders we have to admit that we are hugely disconnected with our nation. I don't like it but have to recognize this issue.

Businessman and investor Mark Cuban thinks Trump must be given a chance.

We all need to give President-Elect Trump a chance. Support the good. Lobby against what we disagree on. No one is bigger than us all

AOL cofounder Steve Case is disappointed at the outcome, but insists the result should be accepted, and we should move forward.

I am surprised & disappointed. But now that the people have spoken, we should accept the result & work together to move the country forward.

I am a bit shell shocked — I did not think the election would go the way it did.  I want to reassure everyone– we are safe– funding, mission, partners have no reason to change. I find this reassuring, hopefully you do as well.

Tech investment banker Frank Quattrone had strong words to say, likening Trump’s victory to World War II, 9/11, recession, and more, but he still reckons the U.S. will get through it.

Box CEO Aaron Levie remains hopeful that Trump’s election campaign promises and threats were all a ruse and that he’s actually a good guy after all.

Strange that the best case scenario at this point is that Trump has been lying about his views and plans the entire time.

Prominent blogger and entrepreneur Anil Dash wants everyone to stand up to Trump.

No matter what, we have to organize & stand up to Trump and fight for the marginalized. I am not afraid of that motherfucker

Investor and entrepreneur Bijan Sabet isn’t looking forward to breaking the news to his kids.

Thinking about what I am going to tell my children at breakfast tomorrow.

Gabe Rivera, founder of tech news aggregator Techmeme, is trying to remain positive and urged everyone to continue fighting the good fight.

So if you still ❤️ the USA, get up tomorrow and continue fighting for truth, the Constitution, tolerance, basic decency, and wisdom. Please.