You’re a technology salesperson. You want to sell to enterprise. How do you:

That’s exactly the challenge Salesify‘s new TechLeads Online service was built to handle. The company bills itself as the “first and only competitive intelligence SaaS platform for sales and marketing professionals using product install base.”

I recently chatted with Oliver Deng, Salesify’s CFO, about the new platform.

“It’s not just about the quality of data … it’s the type of data you don’t have,” Deng told me. “TechLeads Online is a competitive intel platform that lets you pick whatever competitors you want to target [and] download their installed base information — and contacts associated with them — so you can target those folks.”

The platform also allows you to isolate a company — Apple, Twitter, HP, any company — and find out what software they’re using, what hardware they’ve recently purchased, and whether they’re using your competitor’s product.

Deng said Salesify has amassed that kind of data via a massive and ongoing big data collection and analysis project, pulling in publicly-available data from 14 different sources, aggregating it, running it through natural-language processing engines (plus some manual handling in the Philippines), and determining from millions of tiny clues exactly what technology a given company is using.

Currently, TechLeads Online focuses on about 300,000 mid-size to large companies, while adding 30,000-40,000 per week. And the targeting capability of the data it collects is almost mind-blowing.

“One request we received was that someone wanted to take advantage of the HP versus Oracle fight and the fact that Itanium chips were being discontinued,” Deng told me. “They asked if we could find people who use Itanium chips in their servers and use Oracle as their database. We scratched our heads … looked for servers with specific model numbers that identify them as using Itanium chips, re-queried the data, pulled out the set of companies with Itanium chips, and cross-referenced with companies using Oracle databases.”

People were in disbelief, Deng said. He added that the TechLeads service comes down to the fact that if the information is out there, it can be found, aggregated, and analyzed. And, most importantly, small clues are always out there. 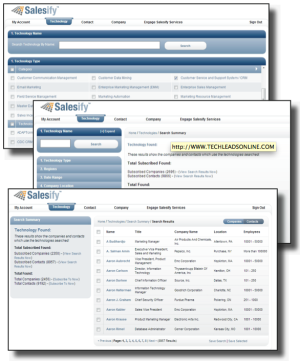 Deng wouldn’t provide many details about what data the company pulls, except to say that for the products that TechLeads tracks — any hardware/software/SaaS products — the company has a set of associated keywords. And by combining data from different keywords, it can tell what a company is running.

Salesify guarantees a 95 percent accuracy rate and says the result is much better sales leads.

“It’s a game-changer,” Deng said. “The current process is to send out a blast of 10,000 emails to IT folks, hoping that one to 1.5 percent open the emails and convert into a lead. That’s a shotgun approach that gets you maybe 50 leads, and it’s a very expensive process. You pay $4,000 for the list, so it costs you $80 per lead.”

TechLeads Online, however, operates on a subscription model that brings the price down to just dollars per lead, Deng said.

“Instead of sending out 10,000 random emails, why not send out 5,000 emails to targeted companies with personalized messaging,” Deng said. “If you’re Symantec, you can send out custom messages to McAfee or Kaspersky or Sophos customers with a custom email to each, targeted against what they’re using now. If you get that email, you’re likely to open that up … so conversion rates are off the charts.”

Salesify wouldn’t release any customer names, saying that the company had non-disclosure agreements with all its customers due to the sensitivity of the data. However, Deng told me that “all of the major players out there” are customers, along with a lot of mid-tier companies.