The impact of the coronavirus on the world economy and investments in gaming isn’t yet known. But some expert discussion grappled with the subject in a panel of early-stage game investors during GamesBeat Summit 2020.

The panel included David Gardner of London Venture Partners (investor in Supercell and Unity); Gregory Milken of March Capital Partners (Genvid, Immortals Gaming Club, and Nifty Games); and Shanti Bergel of Transcend Fund (investor in Nifty Games). It was moderated by David Chang of Juno Capital, which is raising a fund now.

“The honest answer is it is too soon to tell,” Gardner said. “We do believe gaming has been positively impacted because there are more gamers now, more people playing games. A lot of public companies have reported that their revenues are up. In our portfolio, we see companies shipping products getting a lot more traction.”

“But there are two sides to this story,” he added. “We have to think about the life stage of our investments. For new investments today, we are trying to think about what might happen in 12-to-24 months. When they are trying to raise their next series of funding, is that funding going to be there? What will the conditions be? A lot of the game investors are not specialty funds. They are general funds. What will their situation be like? That is where we’re more cautious and nervous.”

He said London Venture Partners (LVP) continues to make investments in new game companies and already announced some recent ones. But the standard for new deals is higher.

Milken said his view is similar, as there were some investments in process prior to the lockdown. Anything new has to meet a higher bar. Part of the reason is that it’s no longer possible to meet entrepreneurs in person.

“We’re still doing all of the same diligence in looking at new deals, but there is a higher bar in how […] we evaluate someone through video calls, and come to that investment decision, which is making things more difficult,” Milken said.

Bergel announced his fund last week, and he has made investments like Nifty Games already.

“The world has changed for sure,” he said. “We are a brand-new fund. But sure, the climate has changed, and it changes the way we operate. It hasn’t dampened my enthusiasm for the opportunity. Games, as David said, have ironically had an uplift because of the situation of everybody being in lockdown. In March, numbers for both revenue and engagement are up. Engagement will be up for as long as we are stuck like this.”

Unemployment could hurt revenues in the short term, but the long-term prospects are solid, Bergel said. Sure, the larger investors may become gunshy, but Bergel is hopeful that games will be the “stars of their portfolios.”

(Not) meeting entrepreneurs in person

Above: Gregory Milken of March Capital Partners at GamesBeat Summit 2018.

As for meeting people in person, there’s chemistry that often determines the fate of an investment. But Bergel said he won’t stop doing investments, and he also knows a lot of people who are starting companies now, and he doesn’t need to meet them because he already knows them. But he said it is possible he will invest in entrepreneurs he hasn’t met.

Gardner said he signed a term sheet with a team in California he had not met, for instance, and his firm had to do more reference checking.

“We might make better decisions by going virtual,” Gardner said.

While there are many viable game platforms out there, from mobile to cloud to consoles, Gardner said this is the first time we have a “massive economic downturn” happening without a technological upswing. The new consoles are coming, but they’re not here yet.

Normally, Milken said, entrepreneurs should have 18 months of runway with their funding. But in this situation, that number may go up. If sports and TV production are down, is there something gaming can do to fill that void in the second half of the year? There’s a focusing effect that emerges that’s beneficial for game companies.

Gardner said that this means teams may have to ask for more money, and that will also make investors nervous.

“The door is still open, but it’s not as wide open,” he said.

Bergel said that it is important for companies to continue to do live updates for free-to-play games to keep players engaged and coming back and spending money.

What they’re looking for, what pitches will work

So how does one raise money? It’s a hard and long process, full of rejection, Bergel said. But you shouldn’t just give up after the first rejection or set of rejections. A rejection from one VC firm doesn’t mean you have a bad idea. It may just mean a mismatch.

“The kind of money we represent needs an exit,” Gardner said.

Milken said he is looking at mobile games, PC gamers, audience engagement, game infrastructure, and streaming. Gardner said he is looking for any kind of esports businesses with a model for making money, beyond just counting on sponsorship revenue.

“I’m not a big believer” in the latter, he said. “It’s great for the industry, but some of the investments in esports have not had a long tail in value creation.” 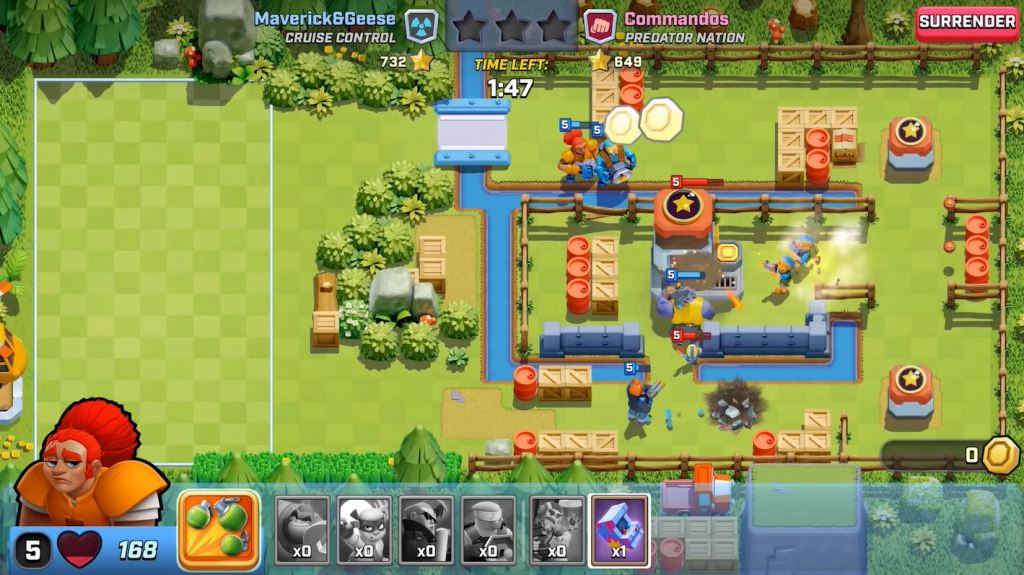 Above: Rush Wars is the latest from Supercell.

Gardner said investments in teams and talent is paramount. His firm invested in Supercell even though they didn’t like the company’s first game, which was eventually scrapped. They moved on mobile games like Hay Day and Clash of Clans, as they had the talent and the runway to make it happen. Gardner worries that people will be afraid to leave big companies to join small companies.

Milken said the best way to find investments or to try to raise money is to network. Getting introduced by someone who knows you is a great way to find a good resource or an ally. Having good teams with good references is key. Gardner said he appreciates teams that are open about what they don’t know and honest about their failures.

Gardner said he wants to see real innovation, as opposed to the incremental gains that he sees all too often. When one partner wants to invest, the pitch gets escalated to the rest of the partners. A majority vote leads to an investment, Gardner said. A term sheet comes out of that, and then negotiation happens as to which is the right deal.

From “yes” to cash in the bank, it can be three months. But the fundraising process can easily be six months overall, Gardner said. It’s worth noting that Startup Genome reported that 41% of startups right now have less than three months of cash.

“We love investing in things that are moving the market in certain areas,” Gardner said.

Bergel wants to see startups investing in sectors that matter. He said inbound pitches come from all over. But he notes that someone leaving on their own now is a real vote of confidence, as it is a risky time to do that.

“That marks you as a special person,” Bergel said. “If you have that background and experience, that already becomes an interesting conversation.”