Just about everyone knows Nintendo, but what is DeNA?

DeNA (pronounced D-N-A, not Dena) is a mobile game and platform business that, up until last week, was mostly known in its home country of Japan. The Tokyo-based company owns Mobage, one of the country’s largest mobile gaming platforms, and grew its business by focusing on gaming for Japan’s feature phones first,  later moving to smartphones. It is now a major player in mobile games, a market that Newzoo says will hit $30.3 billion in 2015. It has since published hundreds of games worldwide across its three key regions: Japan, greater China (including Hong Kong and Macau), and the West, which focuses on North America and Europe.

But its history was forever changed last week with the groundbreaking announcement of a partnership with Nintendo, which would have it teaming up with the Mario and Zelda maker to put its famed IPs on mobile devices for the first time ever. This deal has Nintendo taking a 10 percent stake in DeNA, and its mobile partner getting a small stake of Nintendo in return.

This partnership is a huge business deal for DeNA. While it has maintained its spot as a major player in the mobile space, it still lags behind others such as Supercell and King. It is currently No. 8 in terms of the top-grossing mobile publishers in Japan, according to App Annie, though it doesn’t make the top 10 worldwide. DeNA West CEO Shintaro Asako told GamesBeat in an exclusive interview that it Nintendo had been its sights as a potential partner since 2010, and through this partnership he believes that DeNA can finally reach Candy Crush-sized audiences.

GamesBeat visited the DeNA headquarters last week to get a look at its offices and find out more about its business, which turned out to be more than just games. 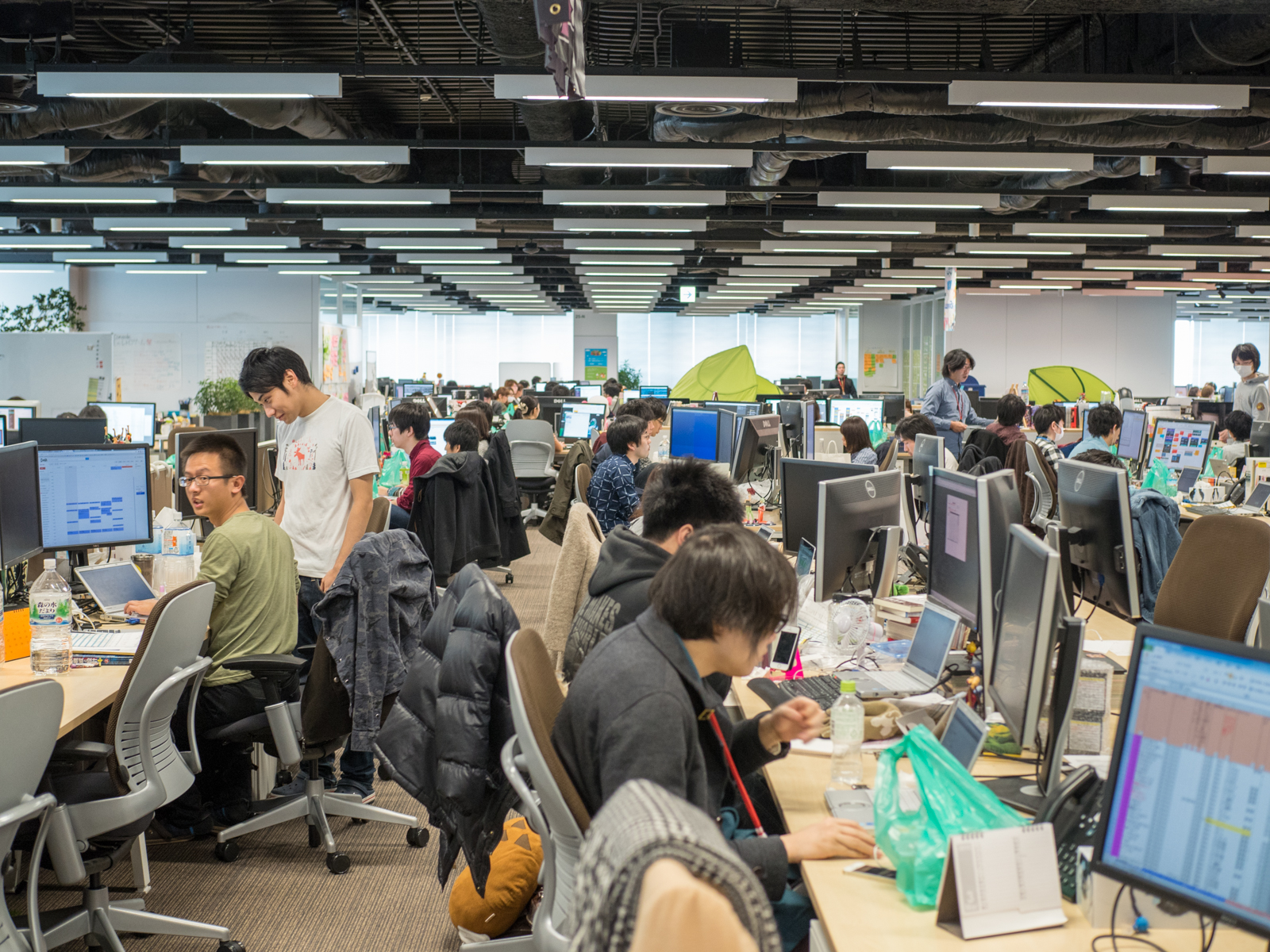 Above: One of the work floors of the DeNA Tokyo headquarters, where employees work on games.

DeNA was an online auction platform when it began back in 1999. The company started with only three members, headed by founder Tomoko Namba, a former McKinsey & Company partner and now one of Japan’s most notable female entrepreneurs. The three started their private company in a small, cramped Tokyo apartment, where they created an auction site that would eventually have to go up against Japan’s current giant, Yahoo Auctions.

DeNA saw an opportunity to shift its business to mobile in the early 2000s — a move that was hugely successful for the young company. This worked because Japan was a highly mobile country even at that time, and flat-rate access to 3G Internet allowed Japanese people constant connectivity via their phones. The company got in while Japan was still in the feature-phone age, some three years before the iPhone’s 2007 release kicked off the smartphone craze.

It wasn’t long before the company moved into mobile gaming. It released browser-based games for its Mobage platform, which quickly grew to reach over 30 million users in Japan. DeNA then bought U.S.-based mobile games developer Ngmoco and attempted to launch its platform overseas, but it found itself up against Apple’s App Store and the Google Play store, both official platforms that quickly became much larger. 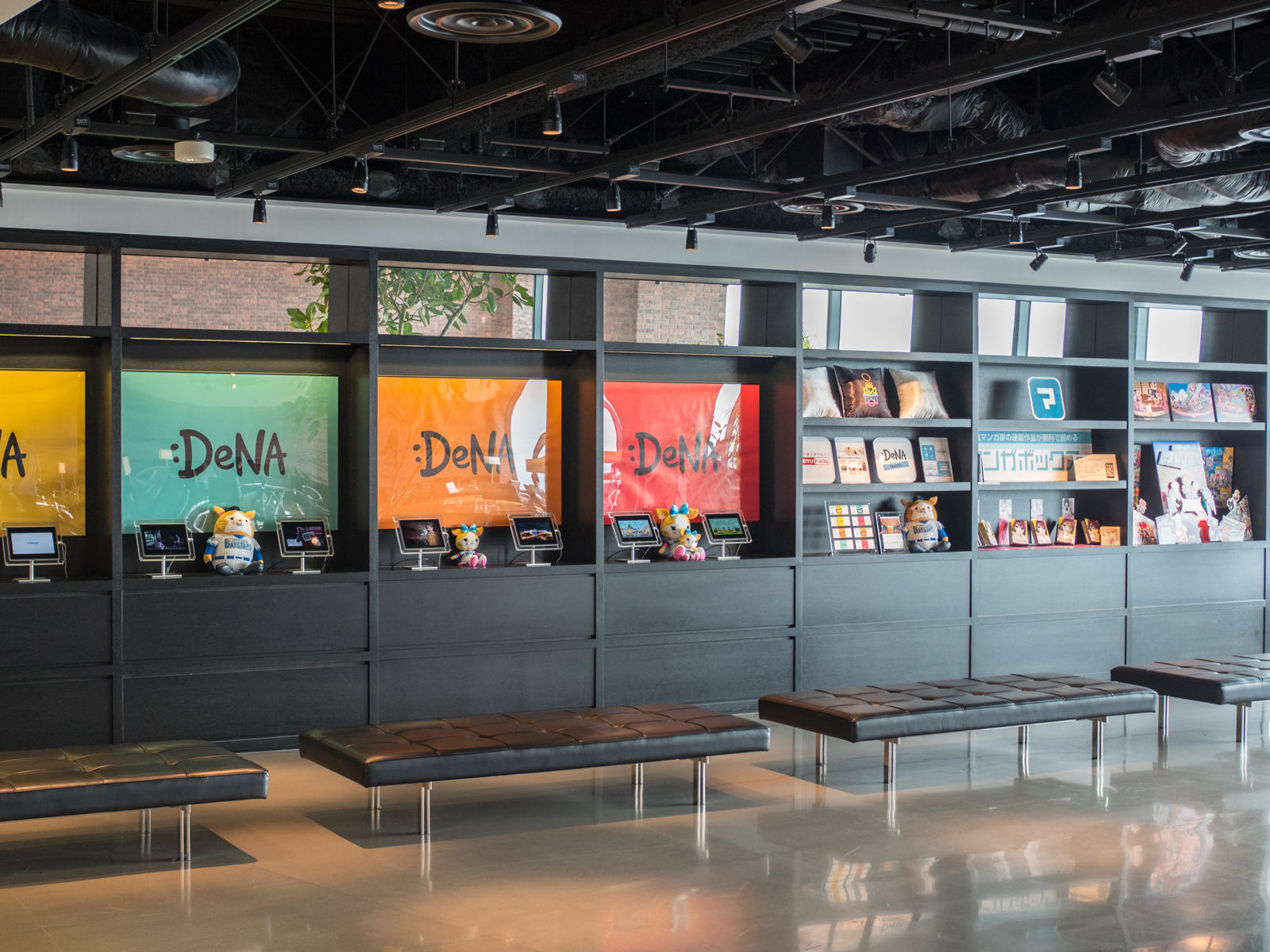 Above: The lobby of DeNA’s Tokyo headquarters.

These days, DeNA sees success as a worldwide developer and publisher of mobile free-to-play games. Hits such as Blood Brothers, Defender of Texel, and Rage of Bahamut helped pave the way for the company to become a sort of branded games publishing house.

It now builds games on the App Store and Google Play for some very popular entertainment franchises, with titles like Star Wars: Galactic Defense, Transformers: Battle Tactics, and Marvel: War of Heroes topping digital charts. DeNA also partners with large game publishers like Tokyo-based Square Enix; a recent collaboration between the two will bring Japanese mobile hit Final Fantasy: Record Keeper to the west this year — a top-ten grossing title that has seen over 5 million downloads in Japan.

DeNA has about 2,200 employees worldwide, with most of those working on games. Outside of its four Japan-based locations, DeNA has offices in Shanghai, Beijing, Seoul, Singapore, Hanoi, Santiago, Vancouver, and San Francisco. For the fiscal year ending March 2014, the company’s annual net sales were at approximately $1.78 billion.