Eikhoff: It’s all evolving very quickly. I’ll reiterate what I said at the beginning. One thing we love to do is sit at the crux between enterprise and entertainment. It’s bringing the creative vision that we have from entertainment to enterprise, and then the execution and the technology from enterprise back into entertainment. You create a cycle.

Forever, those two have sat separate. You maybe had the same accounting software, or maybe you didn’t even have that. But the way you’d create and evolve and innovate in those worlds was pretty different. As those start to overlap–I see a lot of that happening with things like The Void, or the Quest headsets. Those are going to start to create some of that inspiration and vision for what’s possible to do. Can we now walk through a hotel and actually feel things? Can we use fabrics and textures in a different way?

Similarly, enterprise is quickly developing a library, as I just mentioned, of all the assets–as retail starts to generate and leverage AR for iPhones and Android devices, the Home Depots, the Loew’s, the Wal-Marts, the Amazons are all putting pressure on the manufacturers to create their own models, because they don’t want to have to photogrammetry modeling for all those assets. They’re starting to request those.

As the people who make real-world products are starting to become required to make CG versions of those products for retail, that creates a whole ecosystem that designers will be able to start to pull from. It’s a whole different ecosystem. I’ve been calling it “Second Earth,” because it’ll be an entire doppelganger of the world. 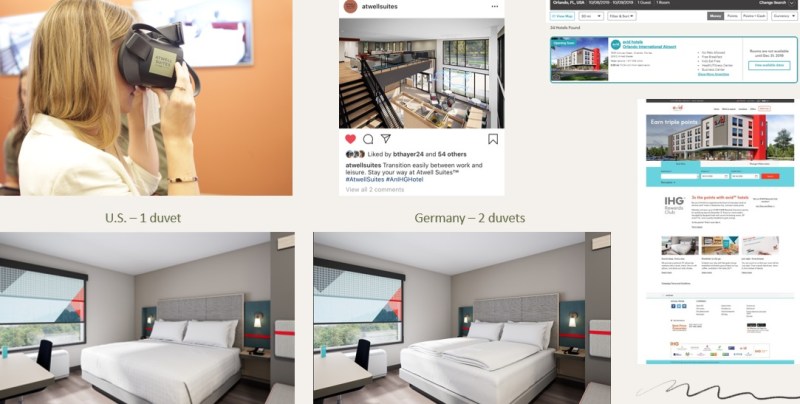 Above: Trick3D helped design a hotel in VR.

VentureBeat: Then the video game people will take all that and blow it all up.

Eikhoff: Right! But to me, there’s a lot going on in those aspects that shows where the future is starting to go. It’s pretty exciting. Tangibly, right around the corner, as we do more designs–as the engines like Unity and Unreal invest more heavily in those tools that are more creative tools inside the engine, I‘m very excited about that. We can pass that on to the designers so they’re making choices in the headset. They’re very close to that right now.

Karwata: The ease of being able to change things–it’s already super refreshing and easy to do that now, but ultimately we could see something like where, in a meeting room, you could change walls and move chairs around, or even change the fabric on the furniture. Like you were saying about building game worlds in real-time, we’ll be able to do design in real-time.

Question: How much time did it take you to go from the Revit files to the finished VR virtualization?

Eikhoff: The way we approach it, it lives side by side with the design process. It’s not just doing a render at the end of the process. We’re actually going back and forth. We’re in the design process with the architects. We’ll get Revit files, but we’re iterating and refining constantly throughout the process. They’re able to do more with it from the brand standpoint. The architects are able to get their own visualizations faster.

You’d assume a lot of things that don’t actually happen at most architecture firms. Most of them are still outsourcing post-design renders. They do their own design process, speaking their own language, that they then try to translate to clients. When you get that visualization earlier, it changes a lot of things. So that process is ongoing.

Question: So it’s just you and the architects working, without a subcontractor producing the renders?

Question: What would you say the iteration time between you and the architect is like?

Eikhoff: It’s kind of a living back-and-forth. The files are in constant communication. As they’re designing something, going into an executive review or a design review, it’s just built into the timeline that we’ll get that as soon as they have it ready. Then we’ll apply the changes to it.

Karwata: Sometimes it’s as little as two hours. Sometimes just changing the color of a wall makes all the difference and solves someone’s problem.

Question: Do you integrate any tracking data from the people wearing the device to acquire feedback?

Eikhoff: We don’t currently. We have the capability. The way we’ve been doing it right now, everyone’s in the same space and you can see what they’re looking at, so it’s more discussion-based as opposed to analytics-based. However, I think as this evolves, that will definitely become more and more important.

Karwata: I can see that application happening a lot with guest research. One thing we also do with new brands is to validate our assumptions with our guests. Things like eye tracking, particularly for signage and any messaging we want to put in, I can see us using that more and more. 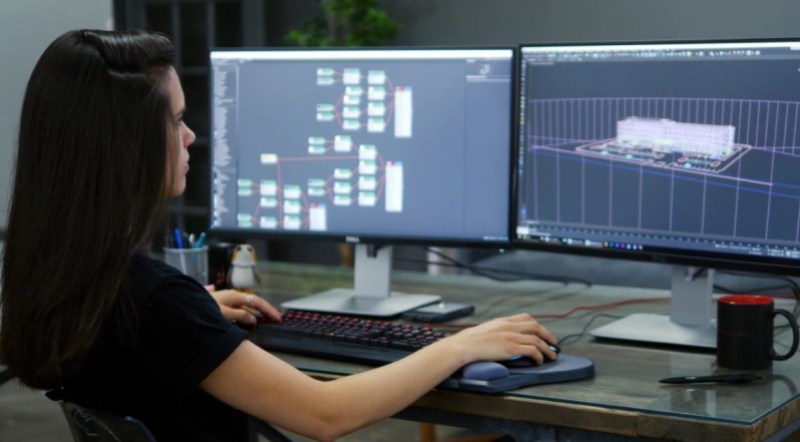 Above: Is VR the new digital blueprint?

Question: You were saying you had multiple forms of consumption. People use a headset or an iPad or other form factors. What do you see as far as the evolution of conversion between the form factors?

Eikhoff: We’re very much in a form meets function approach. We want to align the right technology to the right solution. There are weird resistances from some people to putting on a headset. Executives are inherently still resistant. There’s a power play aspect. “I don’t want to not be able to see what people are doing around me.” There are some soft resistances we still have to work around.

Karwata: We’re very mindful of what we put in front of whom. For example, we have the 360 view that ends up in a B-to-C role. On our website, before opening the first Avid hotel, you could take a tour. We couldn’t do that on the same scale with VR glasses. But very recently, after we launched the first Atwill Suites, there was a big hotel conference. That’s where we took VR glasses to owners and to journalists, because that was a much better medium for the setting.

Again, we take a mindful approach as far as what works where. But having an asset that works across multiple media really helps us target that content.

Question: You mentioned that you had twice as many sales in a comparable time with Avid. What do you think you can attribute that to? Was the ability to preview in VR glasses a factor?

Karwata: It’s very hard to attribute something to just one medium. It’s more about how VR and different models help us set it up and tell the story. That, for me, is where the real ROI comes in. Everything is about the content. It’s less about–the VR glasses are a means to an end. How do you sell the content in a way that’s relevant to a particular person? That’s what makes the technology applicable. If you don’t have good content, you can have amazing VR hardware, but you can’t do much with it.

VentureBeat: How many other ways of seeing ROI did you have? You had the 30 percent, 40 percent faster time to complete the design. What are some other things people should think about as far as ROI goes?

Karwata: For us as a company, looking at the model and the use of VR over the lifetime of the project, you invest much more upfront to build it. As Chad mentioned, we’re designing and building in parallel. But throughout the life of the project, you can use this in sales to owners, in presentations to journalists. You can use it in consumer websites and promotional materials. Launching a product to a new market is so much quicker if you can make that product market-relevant, make both guests and owners interested, versus focusing on it as an American brand.

Change is a constant. The initial design may last for two years, and then you have to start refreshing it. Having this kind of model makes it much easier. There’s a very long tail of ROI on this, and we’re seeing that more and more as the project goes on.

Above: These virtual assets have counterparts in the real world.

Eikhoff: I’d love for a mathematician to give us that number because no company really tracks the money in that way. You understand that it’s there, but tracking something over time across multiple divisions of the company who all have multiple budgets and all find efficiencies and change the ways they do business is difficult to track.

Question: One of the buzzier sorts of technology developments we’ve heard people talking about recently is the concept of real-time rendering. Generally, that’s more confined to the animation and gaming space, but with your grounding in entertainment, is there a possibility of that technology having a measurable effect on what you do in more of a B-to-B capacity?

Eikhoff: Absolutely, 100 percent. The trick right now is that many people start from the campaign level. They say, “We’ll do a marketing campaign. We’ll do a VR campaign, an AR campaign.” Then they start working backward from there, and you start to run into the limitations of what’s possible if you don’t have CG assets.

The big difference here, and there’s still some infrastructure work happening on the tech side–we have some proprietary processes to work around it, but you still have two pipelines. You have a render pipeline and a real-time pipeline, the way those assets are deployed and developed and created for each. For us to create an asset that can be leveraged for a high-end photorealistic rendering pipeline, but then also leveraged for a real-time, fully immersive 6DOF VR experience, is its own trick.

That’s one of the issues of the world moving from 2D to 3D. I can send someone a JPEG and they can open it without a problem on any device. If I send them a 3D model, how should I do that? There aren’t standards set on the consumer side, much less–we’re starting to try and set some on the creation side, but there still aren’t standards. Apple uses a different standard than Google for AR modeling.

A lot of that is going to determine where all that falls. But without a doubt, real-time rendering is where it’s all heading. We’re leveraging some of that on the consumer side and the creative side. These models will sustain that pipeline wherever it lands, but there’s still conversion steps within there.

VentureBeat: I like how you can put this on your website and consumers can look at it in VR. They can see if they really want to stay there. They become part of the sales process as well. But if you make it too good, they might not even feel like they need to go.

Karwata: [Laughs] I don’t think that’s going to become too much of a problem. It’s a great point, though, about consumer trust. What we’ve seen with some of the assets we produce at the beginning, they’re generic enough, not location-specific. We actually have more freedom to use them across multiple hotels that are not ready to show. We’re using that a lot in consumer marketing. As more consumers can use VR at home, that’s something we may think about bringing to them as well.