Twitter has about a billion registered “users.” Unfortunately, only a quarter of them actually use the service with any consistency.

Which is why company insiders are notoriously modest in public statements, mentioning only 200 million users even last week when VP of engineering Alex Roetner warned the Twitterati that they’d be seeing some odd things in their Twitter streams in the next few months. 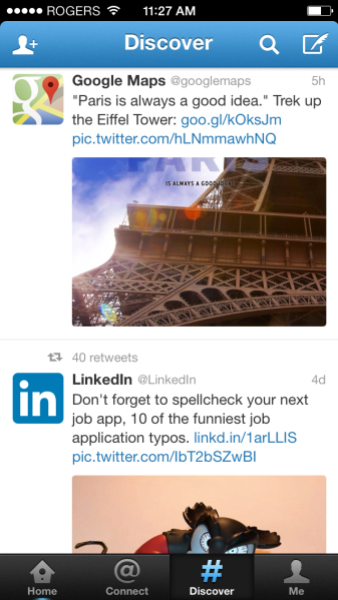 Above: Twitter’s new look will be more like the Discover tab is now, reportedly

One of those odd things is a complete revamp of Twitter’s entire mobile interface.

As multiple people have recently noted, Twitter is almost ready to pull the wraps off a completely new design for Twitter mobile apps that is designed to make the service more newbie-friendly. The changes include a completely removal of the app’s current four tabs — Home, Connect, Discover, and Me — in favor of a swipe-between-streams design in which you simply swipe left or right to enter a new stream of content, likely at least roughly analogous to those existing streams.

Call it #NewNewTwitter, if you will.

There’s no doubt that NewNewTwitter will be a much richer experience for new Twitter users who can instantly jump into stimulating content right on the surface. Currently, that’s buried under an additional tap or two.

The big question is how current hardcore Twitter users will react.

#NewTwitter was a hugely controversial move earlier in the company’s history, and now that Twitter is going public, the last thing it needs is a revolt from its core 250 million users. But the change will be significant, and it will take what used to be a quick scroll through a variety of text-based tweets into a potentially more leisurely journey through a Pinterest of images and videos.

My question: Whether Twitter will include an option to turn off the new by-default-expanded tweets so that crabby old existing users will still be able to see and use the Twitter they know or love.

If CEO Dick Costolo takes lessons from Mark Zuckerberg’s school of how to massively disrupt your users lives and survive just fine — which we think he does — probably not.