Ubisoft created such a massive world for Assassin’s Creed: Origins, the latest open-world game set in the world of ancient Egypt. And one of the people responsible for that massiveness was Raphael Lacoste, art director on the project.

He spoke at the 2017 Montreal International Game Summit (MIGS 17) about how Ubisoft undertook the massive task of making the art for Assassin’s Creed: Origins, which took an extra year to make compared to earlier Assassin’s Creed games. Lacoste was also the art director on Assassin’s Creed IV: Black Flag, which debuted in 2013. I interviewed Lacoste after his talk about the modern craft of making art for triple-A games.

Ubisoft had hundreds of artists. They took inspiration from teams that went to modern Egypt and documented the real-world look of things. But the artists also had to do research on artifacts that are no longer around today, and they had to imagine things that weren’t documented — like how a room might have looked in ancient Egypt. All of it came together in an immersive open world that has a life of its own — so much so that Ubisoft is releasing Discovery Tour by Assassin’s Creed in the new year as an educational title for children. 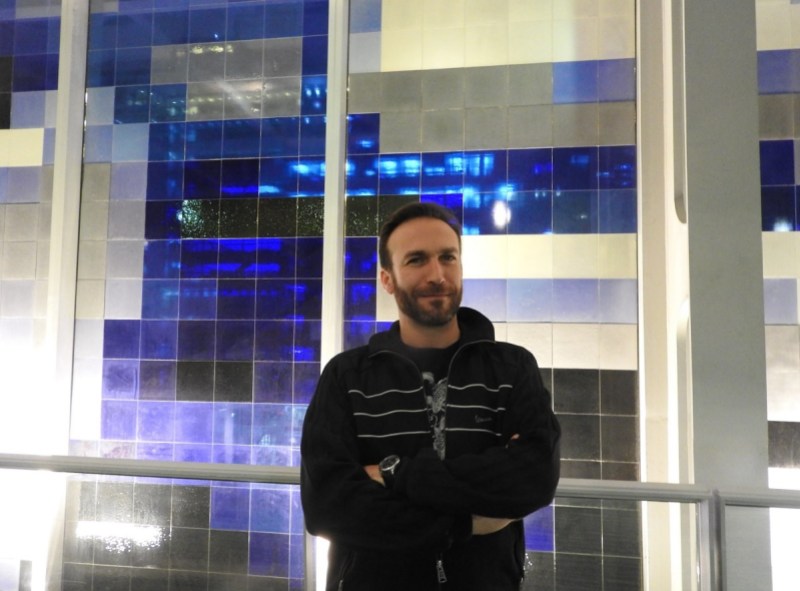 Above: Raphael Lacoste was art director on Assassin’s Creed Origins.

GamesBeat: How would you summarize your talk?

Raphael Lacoste: It’s always surprising how we find inspiration to create interesting worlds, places you want to explore and spend time. I talked about the importance of taking all these trips to find interesting inspirations. With Black Flag, we went to Havana and other places to gather a lot of reference.

It’s also important to know that even if we’re making historical games, we’re not making documentaries. It’s about creating an interesting, entertaining piece inspired by something real and historical. Finding the right balance between [what’s] credible and realistic and what’s a little stretched in terms of immersion. We try to bring emotion to the player through the environment design, as well as character design and story.

GamesBeat: With Origins, it sounded like the world was far bigger than Black Flag or anything else.

Lacoste: It’s pretty different, yeah. At the beginning, when we wanted to create the open world, we had the idea of creating this massive desert and having some oases. But we found out that’s not anything like the real Egypt. We wanted to create all this diversity, all these contrasts. We have the open desert, the lush Nile delta with the swamps and the crocodiles. We also have the mountains in the eastern desert and the massive mountains of the Libyan plateau. There’s a lot of diversity.

In Black Flag, we had the open world of the ocean plus the islands and some linear sequences in the jungles and other locations. With Origins, we had this massive sandbox that was completely open. It wasn’t limited in any way. It’s seamless, too, with no loading. In Black Flag, we had to compromise with some loading, but in Origins, it’s fully seamless.

GamesBeat: Did you guys spend a lot of time on sand?

Lacoste: We underestimated the water in Egypt as well. It’s very important because it’s all built around the Nile. All the cities and locations were built along the Nile. We had to have very interesting water, all different types of water. You had muddy water and swampy water but also the ocean, the Mediterranean in the north, and the river to the south. We also had oases, some of them with salty waters. Faiyum Oasis is pretty big. We had quarries with pools and natron mines. A lot of different kinds of water.

GamesBeat: Is there a point where you have to say, “It’s too much,” [and] stop collecting new pieces of art?

Lacoste: The ambition is always pretty huge in the beginning, and then, we have to check ourselves to keep up the quality control and deliver something interesting. The scope is pretty huge to start, and then, we try to control that scope.

GamesBeat: Another talk went into the AI system, where you can follow alongside someone in the world, and you’ll see them just go about their entire day. Does that have implications for the art in the world as well?

Lacoste: It’s the first time we used this kind of NPC AI system. We don’t have any staged events. You might be on a mission, and you arrive in a place where they have a tannery for instance. You’ll see people working there. But if you go there in the night, those people will be asleep. It gives more credibility to the world. In that same village, you’ll see the same people sleeping on the rooftops. The kids will be on the carpets. Maybe they’ll have some candles. During the daylight, nobody will be on the roof, but they’ll be working in the shade.

We have an intelligent routine for all the NPCs. They’ll travel in the world as well sometimes. We have nomads and caravans, people carrying resources in the open world. It’s an interesting implication for gameplay because you can randomly loot some items that way. 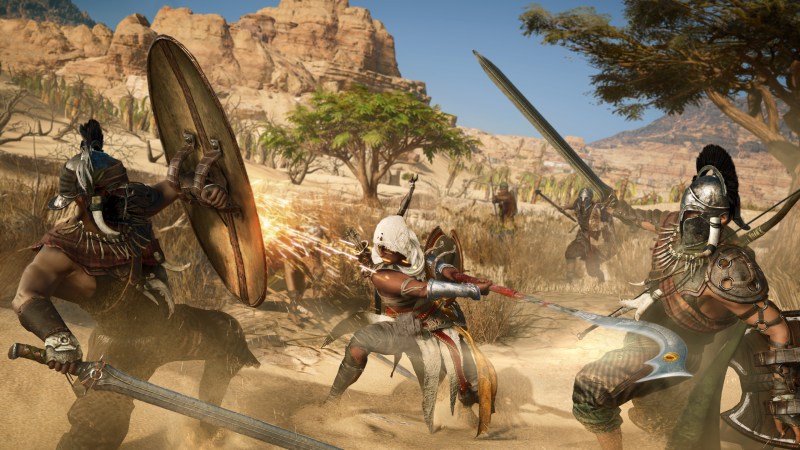 GamesBeat: As far as research goes, what did you find that was interesting, that might have been conflicting in some ways that you had to make decisions around? One thing I think of, there’s always some kind of debate about exactly what Cleopatra would have looked like.

Lacoste: We tried to respect history as much as we could with the characters. We had an idea at the beginning around Julius Caesar. We thought he would be blond, and we gave him blue eyes, but it ended up that he looked too much like a typical bad guy. We did some more homework and did a lot of research into his background, and it turned out that he had black eyes. That led to our version of Caesar with the black eyes and brown hair or more gray hair.

Cleopatra was Greek, not Egyptian, so we wanted her to have a lighter skin tone, not so much of the clichéd Egyptian princess. A different direction than if we had been creating Nefertiti for instance. She was Egyptian while Cleopatra was more Greco-Roman-Egyptian.

Above all, we wanted to bring interesting moments to our players. For the environment design, for the cities, for the landmarks, we did a lot of research. We worked with Jean-Claude Golvin, who’s a historian and an illustrator. We worked with him on the placement of the landmarks. But to bring more emotion, we stretched the size on some things. Some of them are way bigger in the game because we wanted to create this sense of pharaonic scale in places like Alexandria and Memphis. 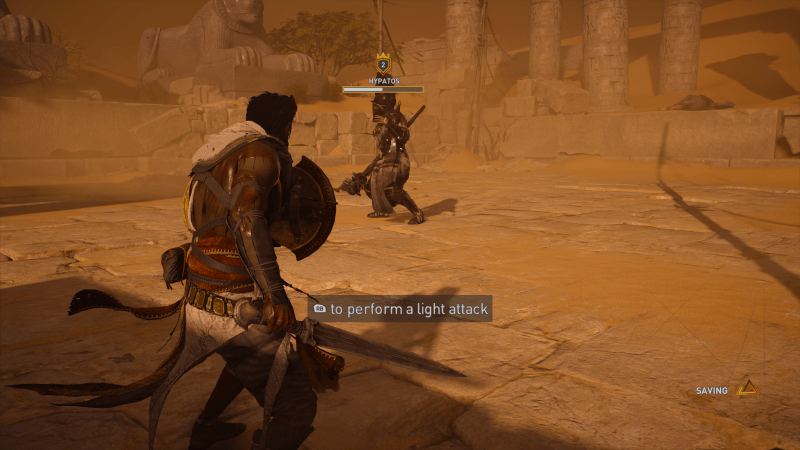 Above: Assassin’s Creed: Origins has a weird control scheme.

GamesBeat: What sorts of other things added to the sense of immersion like that?

Lacoste: You have the personal motivation behind what [the player’s character is] going through. Beyond that, the sense of immersion in Egypt comes from many things. You have the effects — like adding a sandstorm when you’re in the desert. Adding this feeling of threatening atmosphere but also feeling the heat, the scorching effect of the sunlight when you’re lost in the desert. You have hallucinations when the heat takes over. When you arrive in an oasis, you have this feeling of a beautiful green place, which contrasts a lot with the dry desert.

Immersion comes in a lot of ways from those contrasts. The same thing happens when you’re in this magnificent Greco-Roman city, and then, you go from there to a place like Memphis, which is much more of the old Egyptian empire. It’s 3,000 years old even in the time of the game. It’s all about feeling those contrasts as you go through different kinds of immersion.