Valve is building hardware for virtual reality, and it’s taking cues from one of the console industry’s brightest minds. 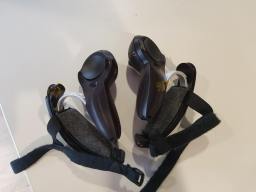 VR is still in its early stages in terms of revenues relative to the industry as a whole, but Valve is pushing virtual reality forward by following the method that legendary Nintendo designer Shigeru Miyamoto used in the development of devices like the DS handheld or the Wii motion-controlled console. Miyamoto, creator of the Mario and Zelda franchises, has repeatedly worked on hardware and software in conjunction with one another to ensure that the company’s games and systems take full advantage of their capabilities.

Valve wants to emulate that process with SteamVR.

“One of the questions you might ask us is, ‘Why in the world are you making hardware,'” Valve founder Gabe Newell said during a roundtable interview with several media outlets including GamesBeat last week. “We’re building three VR games. What we can do now is we can be designing hardware at the same time that we’re designing software. This is something that Miyamoto has always had. He’s had the ability to think about what the input devices and design of systems should be like while he’s also designing games. And our sense is that this is going to enable us to build much better entertainment experiences for people.”

Newell said that Valve isn’t suddenly looking to make a significant profit from hardware devices because the margins are typically not great on those kinds of products. Instead, he explained that in order to move VR forward, Valve needs to think about software and hardware developing in unison.

“It feels like we’ve been stuck with mouse-and-keyboard for a really long time,” said Newell. “The opportunity to build much more interesting kinds of experiences for gamers is there, we just had to expand what we could do. But it’s not about building hardware, it’s about making bigger leaps forward by working on these things together.”

All the senior members of Valve’s VR team acknowledged that its efforts could flop because they don’t know what’s going to work. But the company thinks that any potential failure could provide useful data for anyone else working in the space, and since SteamVR is open, someone else could swoop in with a successful idea that Valve couldn’t think of.

“The presumption is that when you’re trying to build something new, you’re going to have a lot of failures,” said Newell. So you want to be in a position so you know if something could work. If you’re not failing, then you’re probably not exploring the potential space.”

But Valve is determined to do that exploring, and Newell specifically points to Nintendo as an example of how to do this kind of experimentation.

“Because you can always be surprised,” said Newell. “Personally, I thought the DS was kinda stupid. I thought Sony was going to crush Nintendo in that generation of handheld devices. I was totally wrong. I hadn’t worked on it. I hadn’t tried to design any games for it. And clearly the DS ended up the winner.

“On the flipside, the first time I played Wii Sports, I was like, ‘Oh, my god — there’s so much potential here.’ But it turned out that Wii Sports pretty much nailed it, and that was it. And there was less innovation that I expected.”

So Newell is wary of his initial instincts.

“You can still find out that there was more or less [to an idea] than you thought,” said Newell. “And you find out by making a bunch of experiments and getting a bunch of other people to try things. And the assumption is that as we continue this ongoing evolution of game design, tools, and hardware, we’re going to find stuff that really creates game experiences that take advantage of the unique characteristics of VR.”

And so Valve will keep iterating on its hardware and software, and everyone will get to see if the company ends up with a success like the Nintendo DS or a flop like the Wii U. Either way, Newell and his team are prepared.