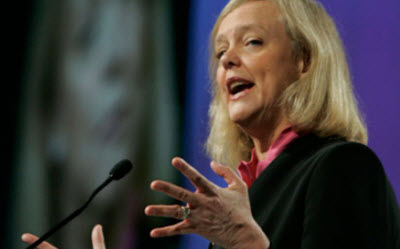 The report for the fourth fiscal quarter ended Oct. 31 was the first since Meg Whitman took over as chief executive of the technology industry giant in September.|

“HP has a great opportunity to build on our strong hardware, software, and services franchises with leading market positions, customer relationships, and intellectual property,” Whitman said in a statement. “We need to get back to the business fundamentals in fiscal 2012, including making prudent investments in the business and driving more consistent execution.”

Whitman wasn’t CEO for the entire quarter ended Oct. 31, so she won’t be entirely responsible for the company’s earnings performance. Leo Apotheker preceded Whitman in the top job but he was fired in September as the board lost confidence in his ability to communicate HP’s strategy.

Since taking over, Whitman announced on Oct. 27 that she was reversing Apotheker’s plan to sell or spin out the personal computer division. Whitman is expected to offer some guidance for HP’s expected performance in the coming fiscal year.