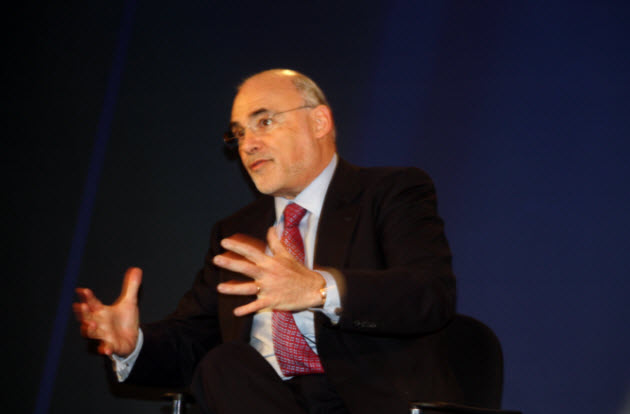 Leo Apotheker was poised on stage in his first formal stage presentation to press and analysts in San Francisco today. He was also comfortable and humorous during a Q&A session with the press afterward.

The talk was Apotheker’s first coming out with such a large audience since he joined HP as CEO in November. In his German-accented English, he showed more personality than the no-nonsense, completely-scripted Mark Hurd, who left HP amid a sex scandal in August. 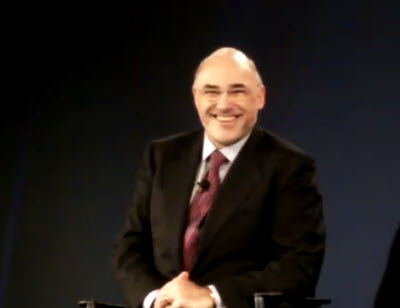 How Apotheker delivered his speech was important, considering some CEOs (Facebook’s young chief Mark Zuckerberg comes to mind) become a little unglued when under the pressure of live speaking and intense questioning from reporters. Whether you agree with his new strategy or not, you can tell from the videos below that he’s comfortable in the spotlight. He pretty much passed his first test of running the world’s biggest tech company: being a decent public speaker.

“I thought he was very poised and actually anxious to answer all of the questions, even the difficult ones,” said Tim Bajarin, an analyst at Creative Strategies. “I was impressed with his grasp of the industry, especially the prosumer (professional consumer) market they will target. When we used to ask (former CEO Mark) Hurd about their consumer strategy, he almost always turned that question over to someone else on his executive staff to handle.” 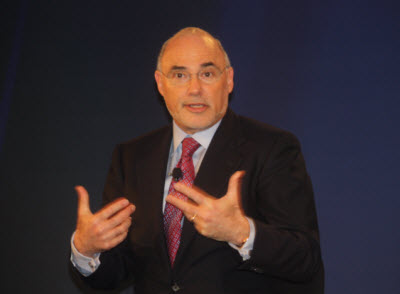 But a nice speech is not going to turn around HP’s stock, which is down about 25 percent in the past year. As for the strategy, Apotheker said HP would focus on cloud computing, connectivity, and software. HP would create its own public cloud, its own app store, and a plethora of connected gadgets running HP’s own WebOS operating system. Software would glue all of this together.

Bajarin said it seems sound. “Creating an infrastructure  service and supplying all of the ecosystem products that can use this service is a smart move,” he said. “That and their emphasis on enterprise class security should help them get a lot of attention with enterprise customers and small businesses.” 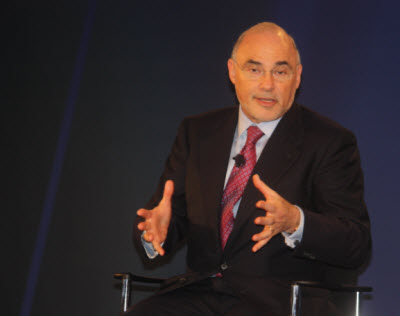 Bajarin also says it’s a grand vision that will need many people working in lock step and in great harmony to pull it off. Unlike Hurd, Apotheker talked a lot more about what kind of innovations HP could bring about in the future rather than cost-cutting. He said HP stands at an inflection point where a shift to cloud computing will dominate the discussion. He noted how consumer innovation cycles in social media are pushing enterprises to react.

“Their biggest problem will be internal execution,” Enderle said.

When asked about IBM, Apotheker replied that it was interesting that IBM offered a comment about HP’s as-yet-unannounced strategy before Apotheker even hit the stage. That seemed, he quipped, to indicate some “nervousness.” When pressed to explain HP’s relations with Microsoft in operating systems, he emphatically insisted that the “relationship was strong, is strong and will remain strong.” And when one reporter dismissed his “platitudes” about the cloud and how far behind HP was compared to its cloud rivals, Apotheker smiled at the challenge and said, “We will catch up and then we will talk again.” He also said, “We don’t intend to play in the junior league” in the tablet market. 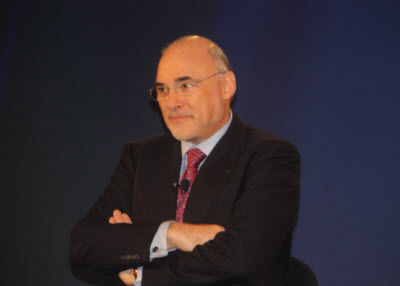 As a couple of more examples of poise, Apotheker paused before answering a question about the Japan quake on HP’s business and expressed his sympathy for the Japanese people and the hardships that HP’s own Japanese employees may be having. He said that HP had made a donation for relief efforts in Japan and would match employee donations dollar for dollar. When a reporter sneezed, Apotheker smiled and said, “Bless you.” And he joked that he would only answer questions from reporters who had HP laptops.

Roger Kay, analyst of Endpoint Technologies, had mixed feelings. He said, “I feel like Leo is poised and in control, but that he’s short on proof points, how he’s going to get where he says he wants to go. He’s using all the right buzz words, but it’s hard to see the substance behind the phrases. I’m still puzzling out how apps stores work in enterprise, but some other analysts say it’s a way to sandbox and control app distribution. I’d like to see more on how that is supposed to work.”

Kay added, “It’s clear he’s going to invest in software, but he said precious little about PCs and WebOS. So, even though he’s promising end-to-end, he’s not saying much about how.”

Check out Apotheker’s speech below and the Q&A with reporters below that.