The best Chromebook on the market today is now made by HP.

At a base price of $499, it’s inexpensive without feeling inexpensive, and the performance is good, too.

But. But! The biggest story in Chrome OS land is the arrival of the Google Play Store and, as a result, Android apps on Chromebooks. This is where the HP Chromebook 13 falls short. The way you primarily interact with Android apps is by tapping the display, and the 13’s display — nice as it is — does not support touch. HP intends to release a touch-compatible version, but it’s not available yet.

For now, we have this laptop, and it’s plenty good. Now that Google has discontinued the Chromebook Pixel 2, this is the top of the line as Chromebooks go.

Its “brushed anodized aluminum” case is glossy but not extremely so. It gives the machine a distinctly upscale feel. It’s reminiscent of the new MacBooks, and not what you would expect given the base price. 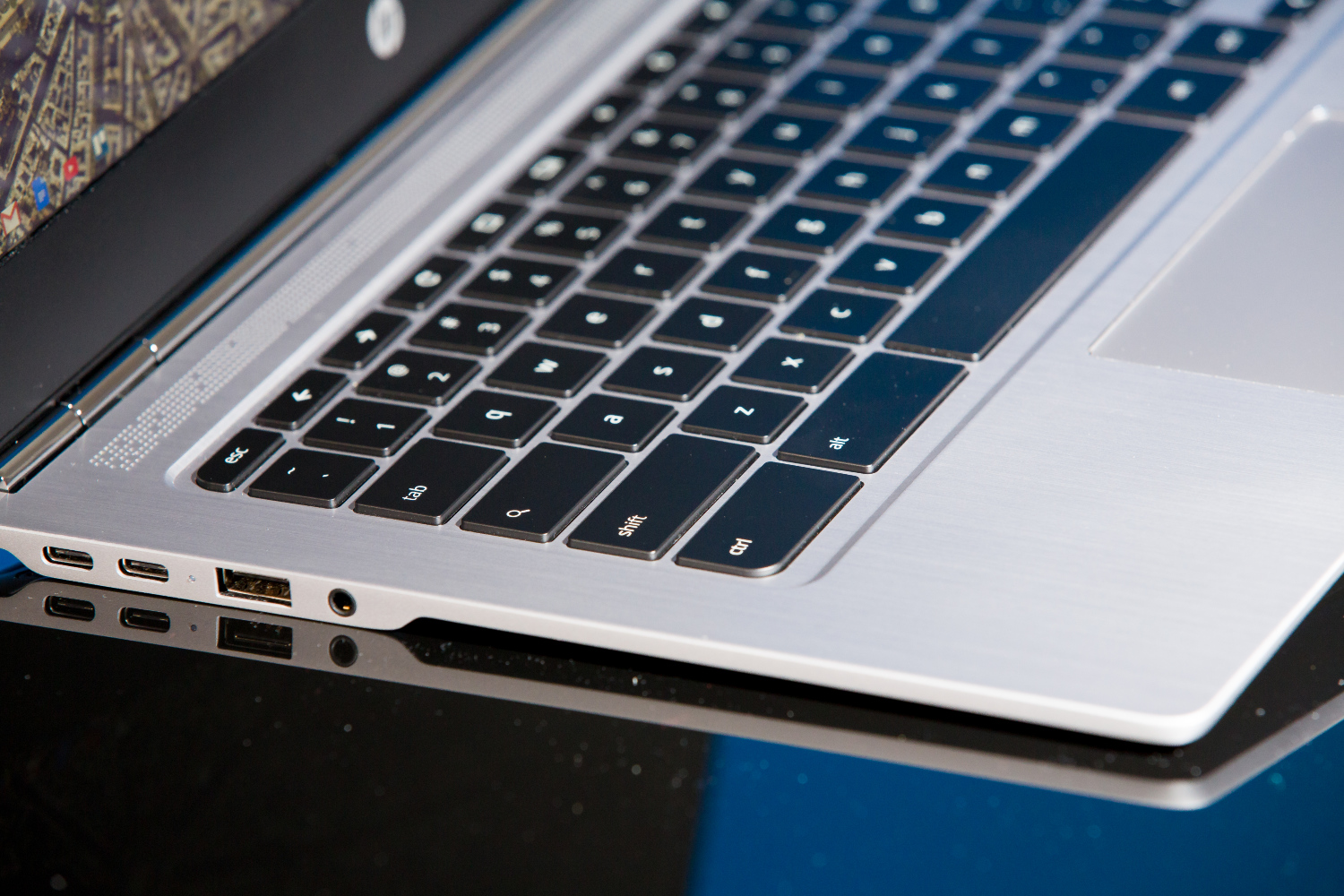 Above: The keyboard on the HP Chromebook 13.

The 13.3-inch QHD display is exceptionally bright — keeping it at medium brightness all day is easy — and very clear. You can only see individual pixels if you look very, very close. At 3200 x 1800 pixels, there’s a wide range of resolutions to choose from. At 2.86 pounds, it’s not heavy.

Performance was excellent on the model I tested, which had an Intel Core m5 chip inside, an Intel HD Graphics 515 integrated graphics processing unit (GPU), and 4GB of RAM. (This model’s retail price is $819.) The machine starts up very quickly and emits no fan noise while running. Hit Alt-Tab and you’ll switch apps immediately. HP says this model’s battery lasts up to eight hours and 15 minutes; I found myself getting five to seven hours on average.

The keys on the full-size keyboard are refreshingly squishy — nothing like the 12-inch MacBook — and go down easily. There’s no need for your fingers to exert a burst of pressure with each keystroke. The keycaps are made of a softer plastic that contributes to the pleasant experience of typing on the Chromebook 13.

The trackpad is good, but not great. It has a funny glossy texture that your finger ever so slightly bounces on as you move it across the surface. There’s a little friction, which makes it feel odd to scroll with two fingers. Navigating to the exact pixel you’re seeking can take a bit more time than on other devices — like, say, a MacBook Air, or even my Toshiba Chromebook 2.

As USB-C becomes the standard for connecting peripherals, it’s nice to see HP embrace it, but not totally. Here you’ll find a good old USB-A port alongside two USB-C ports. A headphone jack and a microSD card reader are also onboard along with a HP TrueVision HD camera. The Bang & Olufsen speaker bar above the top row of keys — which you’ll find on many of HP’s current laptops — produces a tinny sound that leans more toward treble than bass. Also, it could be louder. 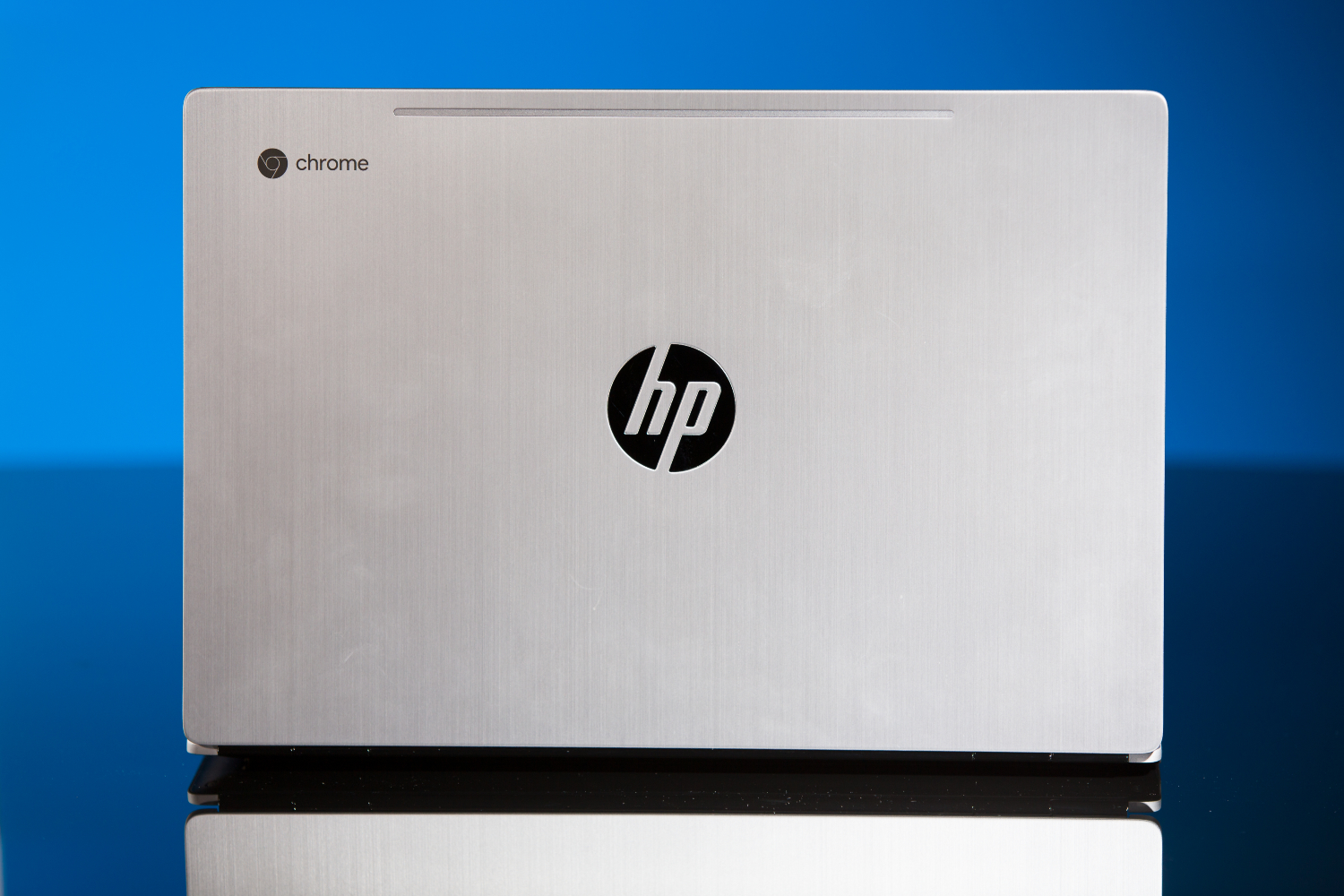 Above: The lid on the HP Chromebook 13.

The 32GB supply of inexpensive eMMC flash storage is a limiting factor. In terms of specifications, it’s the most obvious reminder that this is a Chromebook, a system whose original spirit is to be dependent on online services. It’s not really the right place to store lots of video or photos. This is where the microSD port on the laptop and, of course, cloud storage become critical.

Speaking of storage, using the File System extensions from Increments developer Yoichiro Tanaka, I was able to start saving files to non-Google cloud file sharing services like OneDrive and Dropbox, and that was great. Although they remained installed on the Chromebook, tokens for accessing these other services kept getting removed from the Files app after a few hours, which required me to sign in again to make them show up again. Even so, the basic ability to save and open files from non-default repositories is still there.

Like other devices running Chrome OS, you can go to town installing Chrome apps on this laptop, and there are some good ones, like Autodesk’s Pixlr Touch Up, the Caret text editor, and Chrome Remote Desktop. Plus, Google has picked up the pace in enhancing the standard user interface of Chromebooks. There’s a new app launcher icon, a new look for overview mode, and History and Extensions pages in Chrome now adhere to Google’s Material Design standards (the former is currently behind a flag). And Google is making it possible to unlock your Chromebook with a PIN code instead of a password. Generally, then, Chrome OS is not a static platform.

With that said, there are still limitations when you’re using a Chromebook today. Want to play Apple Music? Sorry, there’s no native app, and it’s not on the web, either. You still have to rely on web versions of many apps, like Convo, Excel, Facebook, Messenger, Outlook, Slack, Spotify, Twitter, WhatsApp, and Word. These work on the web, but when you’ve got them all running at the same time, you’ll find yourself with lots of browser tabs open. The computer can handle that, but it still looks messy. 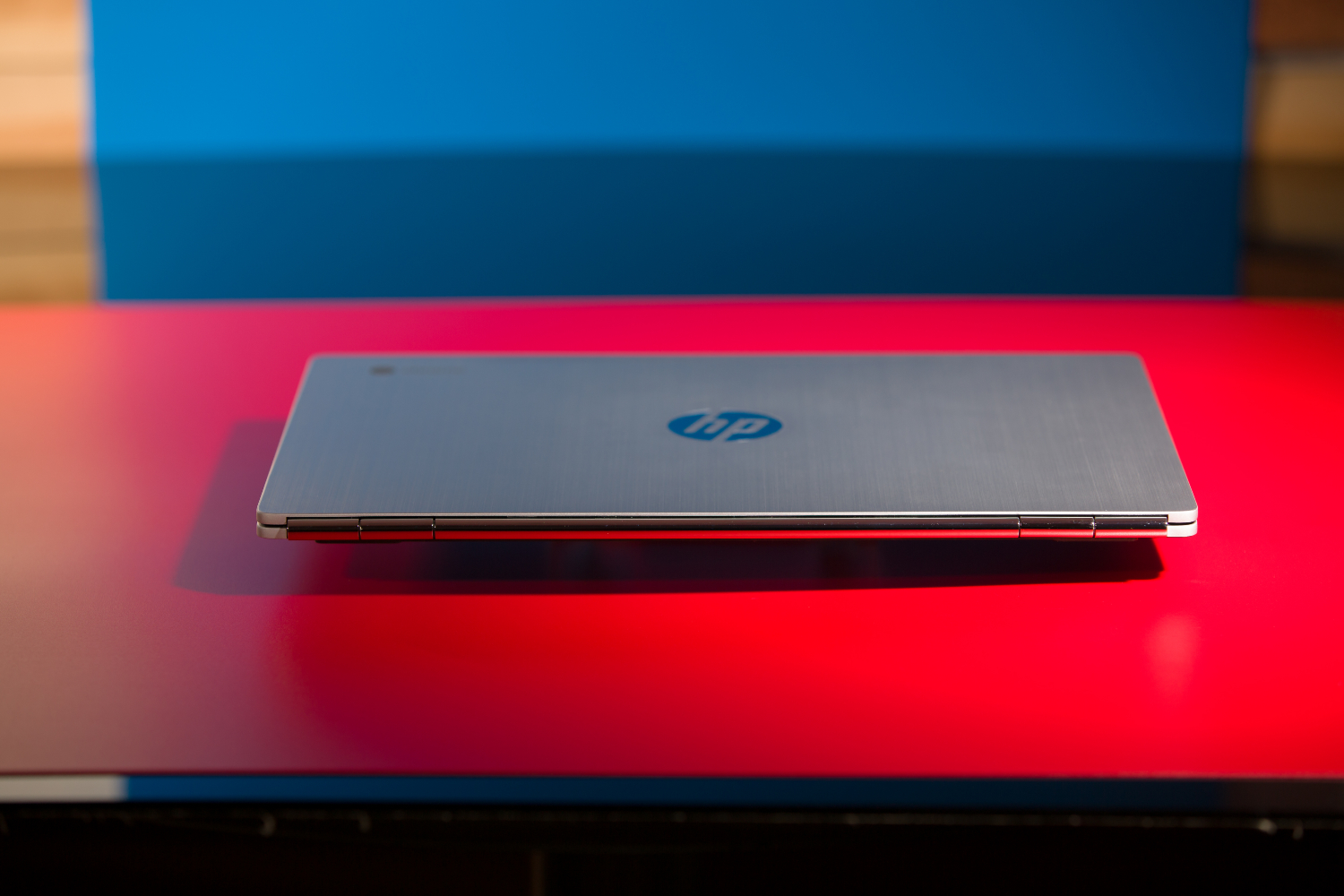 Above: HP Chromebook 13 at rest.

This is precisely why it’s a big deal that you’ll be able to run Android apps on Chromebooks. Suddenly many more native apps will be available on the desktop. You’ll be able to order an Uber from your computer, or post something to Instagram. It’ll be freaking cool, let me tell you.

If swiping with your finger on these apps is a must for you, then maybe the current HP Chromebook 13 isn’t just right. But the upcoming touch version will be.

For those who don’t mind clicking on apps that ordinarily use touch, the current version is your best option.