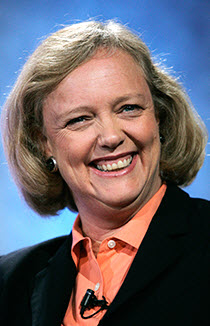 Hewlett-Packard shares are rising this morning on reports that former eBay chief executive Meg Whitman is being considered by HP directors as a possible replacement for current boss Léo Apotheker.

AllThingsD and Bloomberg are reporting that a “significant contingent” on the board wants to remove Apotheker after a series of foul-ups. HP shares rose 7.9 percent to $24.24 today, gaining $3 billion in market value, on the report. The move would be a big upheaval for the company, which is a Silicon Valley icon and the world’s largest technology company.

Whitman is reportedly considering taking on another big job after she lost her run for governor of California last year. Since then, she has been consulting part time at venture firm Kleiner Perkins Caufiled & Byers. Whitman has also been active with her family foundation and has reportedly shown interest in taking the HP job. Whitman joined HP’s board in January. HP declined comment.

Whitman took eBay from a small startup to a multibillion-dollar powerhouse, so she is likely to be a candidate for any CEO job at a large tech company. But her expertise is in the consumer market and she has never run a large hardware company with major enterprise clients. At eBay, her record was mixed and she (and her successor) failed to make the Skype acquisition work. The board has been meeting by phone and will talk about the topic in person soon, AllThingsD said.

HP has taken some drastic and unpopular moves lately, sending the stock price downward. Apotheker recently laid off 500 employees in the WebOS division, killed the WebOS tablet after just six weeks on the market, bought software firm Autonomy for $10 billion, and announced he would explore spinning off the company’s PC division. Apotheker came in as CEO in October 2010, replacing Mark Hurd, who was fired in August 2010 over allegations related to improper expense reports and a sexual harassment investigation. Since that time, HP’s stock is down 43 percent.

Much of the criticism around the recent announcements is about how Apotheker handled the big changes. He announced that HP was thinking about a spin-off of the PC division, potentially hurting its business in the process, and said a decision and spin-off or sale could take 18 months. Observers said he should have taken action first and then announced it. But HP’s board was reportedly concerned about a news leak and that the decision itself was material shareholder news.

Apotheker also pulled the plug on WebOS just six weeks after the first tablet launched, effectively scuttling a business that Hurd had paid $1.2 billion for.