HP’s enterprise gadgets have been a little boring. But the company is hoping to infuse its new business laptops and other gadgets with a better design sensitivity that appeals to consumers. Even enterprise computers have to be stylish these days.

That’s the thinking behind a whole generation of new products (powered by Intel’s recently released Haswell chips) being announced today by one of the world’s biggest computer makers, said Michael Park, vice president of strategy and product management at HP.

“We’re seeing a transformation in end-user computing,” Park said. “You have a lot of different expectations among workers. Big changes in where people work, and a very different style with social and informal work. We have to build desirable products, not just valuable products. They have to hit the hearts of the users.” 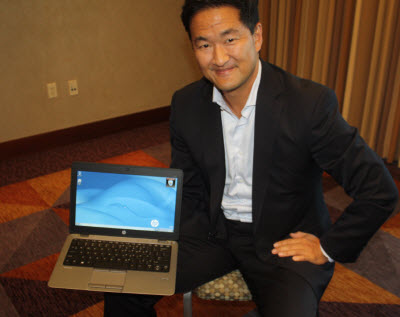 HP is designing its laptops and tablets so they can be used in multiple ways and look stylish without busting an enterprise’s budget. It has hybrid laptops and tablets, which can be converted easily into one or the other. But they’re rugged, with security and reliability built into them.

The products include the ElitePad tablet. The ElitePad has an option for a HP Security Smart Jacket for mobile authentication.  The HP Security Jacket for the HP ElitePad is available now, starting at $249 with integrated smart card reader and $439 with the addition of the optional fingerprint reader.

HP is also upgrading its EliteBook like of laptops. The HP EliteBook 800 series is 40 percent thinner and 28 percent lighter than previous generations.

“These are not giant tanks anymore,” Park said.

They’re designed for frequent travelers with an option to expand the device to 33 hours of  battery life and military-grade ruggedness. They have security and IT management features, but can be customized to different types of users. They come with a rich graphite black color and meteorite gray accents. The design was inspired by high-performance automobiles. The 800 series has a single body magnesium chassis, with aluminum accents.

The 800 series has a “drop-jaw” hinge for the Ethernet port, allowing you to hook an Ethernet cable to the laptop even though it seems to thin to support the Ethernet jack. On security, HP has added its Trust Circles tech that allows only assigned contacts to access critical files. The HP EliteBook 820 G1 is 35 percent thinner, 18 percent lighter, and it has a 12-inch display. Some of the models have spill-proof keyboards, where you can spill a liquid on it and then it drains through a hole in the front.

HP has protected the hardware with its HP Sure Start technology, which detects malware in the BIOS, or basic input-output software. If it detects something wrong, it will access the correct version of the BIOS to the hardware and restart the computer.

“We try to make them sleek,” Park said. 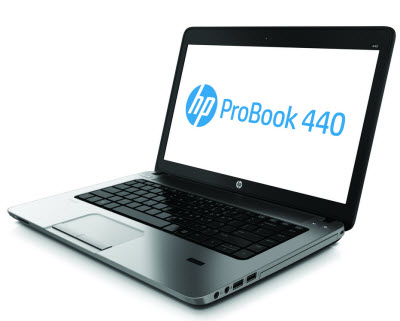 The HP ProBook 655 G1 notebook is 19 percent thinner than the previous generation and it has a 15.6-inch display and AMD Radeon HD 8000G Series graphics. The 600 series starts at under $700.

New printers for the age of mobile

HP is also showing printers that can work with mobile devices. The printers make it easier for business people to print on any machine on a WiFi network, so long as a mobile device is paired with that printer. Pradeep Jotwani, senior vice president of the LaserJet and Enterprise solutions at HP, said in an interview with VentureBeat that HP is launching its first “touch-to-print” solutions.

“It’s still a hybrid paper and digital world,” said Jotwani, who anticipates that 37 percent of the global workforce will be mobile by 2015.

“Organizations need to adapt quickly to the changing landscape of information technology, which includes dealing with the vast amounts of data and processes created by a growing mobile workforce,” said Jotwani. “New innovations and an updated LaserJet printing portfolio help improve customers’ mobile print experience and transform the management of digital and print workflows for potentially greater business performance.”

How did these new products go over?

“The most interesting items I observed from HP’s new commercial PC launch was the improved industrial design and HP’s moves into providing mobile networking for customers across Europe, said Patrick Moorhead, analyst at Moor Insights & Strategy. “The ElitePad 900 is truly special, but I hope they upgrade this to Intel’s (new tablet chip) Bay Trail technology for significantly improved performance.”