Hewlett-Packard is reorganizing its PC division so that Voodoo PC gaming computers will no longer be stand-alone products — one more sign of the relentless focus at HP to focus on cost-cutting.

Voodoo is a tiny part of the overall HP PC business. It sells high-end gaming systems in hand-painted cases that can go for $10,000. While the sales are small, Voodoo represents an ultra-cool brand favored by hardcore gamers who have considerable influence on other consumers. As such, Voodoo represent’s HP’s best chance of getting into good graces with a fan community that is as avid as Apple’s users. It will be interesting to see how much HP tries to balance its need to appeal to hardcore fans with the greater need to appeal to mainstream consumers who probably don’t appreciate the extreme technology behind the Voodoo machines.

Bought by HP in Sept 2006, Voodoo just launched an ultra-thin laptop, the Voodoo Envy 133, as a rival to Apple’s MacBook Air laptop. The product has been greeted with great reviews and so the Voodoo products certainly seem to be doing well.

In a blog post, Voodoo co-founder Rahul Sood said that the Voodoo products have now been “welcomed into the greater HP catalogue.”

At the same time, rumors circulated that HP is shutting down the separate Voodoo PC operation in Calgary, Canada. When HP acquired Voodoo, it said somewhat improbably that it would keep the operation in Canada separate from its own mass market PC division. But in an era of cost-cutting where HP chief executive Mark Hurd announced 24,600 layoffs over the next three years, that stand-alone operation in Canada seems at risk. 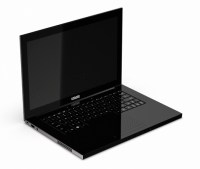 Sood doesn’t specifically address the issue of layoffs at Voodoo in his posting. Ann Finnie, a spokeswoman, declined to talk about any job cuts at Voodoo. She noted that Sood broke his hand riding a mountain bike over the weekend.

But he says Voodoo and Voodoo-influenced products will be easier to buy, faster to get, and have the full power of HP’s marketing and sales channel behind them. In other words, maybe Voodoo is taking over HP’s PC division. Sood says the product plan for Voodoo is being accelerated. “The great news is we’re all heading in the same direction, and it’s a good thing — it’s a real good thing,” Sood writes.