Hewlett-Packard is launching such a big pile of products today it reminds me of the days when the company used to call its product launches “the Big Bang.” But today’s releases focus on a segment of computing known as the all-in-one PC, which has a keyboard, monitor and computer all packaged into one machine.

This new family of all-in-one PCs for consumers and businesses is aimed at taking the category into the mainstream for mass market consumers. Products like the iPad and iPhone have made consumers comfortable with touchscreens, and that comfort is extending to the PC screen as well. So HP is responding to the market trend toward cool-looking touchscreen computers.

“When we entered the all-in-one business years ago, the focus was one-size-fits all,” said Randall Martin, chief design strategist at HP, in an interview. “Now it has expanded as we have seen an increase in the diversity of customers who are interested.”

All-in-one computers consume less space and use less power than traditional PCs. They have multimedia features that show off the touchscreen.

Although CEO Leo Apotheker has announced plans to explore selling or spinning off the PC division, HP PC division folks are making sure everyone knows HP is still the biggest PC company in the world, with $41 billion in annual sales. HP sells two PCs a second and has a presence in 170 countries. 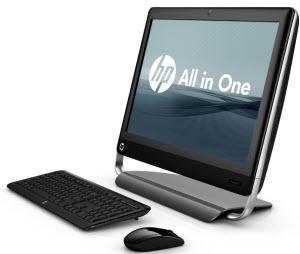 “This is designed to be the centerpiece of a home or small business where you really want to share it with multiple people,” Martin said. “The idea was to create something iconic and eye-catching, but also the thinnest profile for a machine.”

The TouchSmart machines have the latest version of HP’s TouchSmart software for an easier-to-use interface. That allows users to access applications, desktop icons, and otherwise navigate without the need for a mouse. The computers have Beats Audio technology designed into each model, with an optional HP Pulse Subwoofer for the 520. You can remove the stand and hang it on a wall.

Martin said businesses like the idea of sharing a touchscreen PC for the sake of encouraging collaboration. HP is also launching its first TouchSmart Elite 7320 all-in-one computers for small businesses. The design allows the machine to be tilted up to 30 degrees vertically, allowing it to be put in small places. The 7320 has a 21.5-inch diagonal screen. Another business model is the HP Pro 3420 all-in-one, with integrated webcams and stereo speakers for use in communication with remote employees. It has a 20-inch screen. The 7320 costs $850 and is available on Sept. 21. The HP Pro 3420 costs $599 and will be available in October. 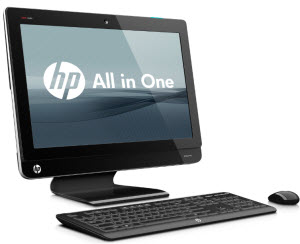 Martin said some people want all-in-one computers just because they save space, even if they don’t have touchscreens. So the new models also include the non-touch machines HP Omni 120 and HP Omni 220 (pictured right), with 20-inch and 21.5-inch diagonal screens, respectively. The HP Omni 120 sells for just $399 (starting Sept. 21) and the Omni 220 sells for $799 (starting Sept. 11).

Both come with a lot of storage, built-in speakers, and high-definition displays. They feature HP LinkUp, which lets you hook up a notebook computer and use the all-in-one as the display for the laptop. The HP Omni 220 has a cantilever design for its stand so that it can be tilted forward or back.